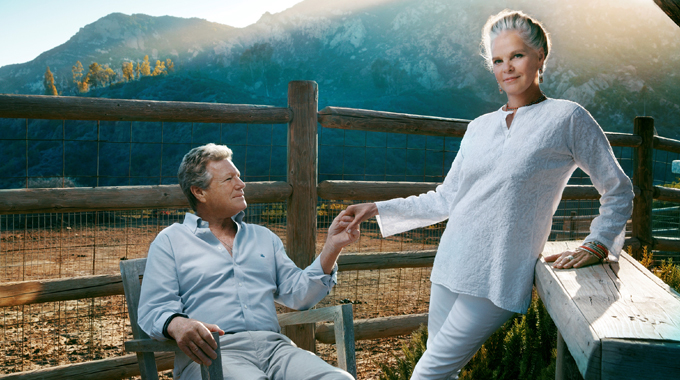 Ali Macgraw and Ryan O’Neal are one of the most celebrated movie couples in the history of Hollywood. As stars of the mega hit, Love Story, during the 1970s, they became as iconic as Humphrey Bogart and Ingrid Bergman in Casablanca, Clark Gable and Vivien Leigh in Gone with the Wind, or Elizabeth Taylor and Richard Burton in Cleopatra.

Ali Macgraw and Ryan O’Neal are one of the most celebrated movie couples in the history of Hollywood.  As stars of the mega hit, Love Story, during the 1970s, they became as iconic as Humphrey Bogart and Ingrid Bergman in Casablanca, Clark Gable and Vivien Leigh in Gone with the Wind, or Elizabeth Taylor and Richard Burton in Cleopatra.

Even on the telephone, MacGraw and O’Neal still have chemistry.  He is a playful tumble of quips and reminiscences.  She provides measured and thoughtful insights.  Together, they are entirely charming.

O’Neal and MacGraw are slated to begin a two-week run in A.R. Gurney’s Love Letters at 710 Main Theatre in Buffalo on May 11th.

In case you are too young to remember the Love Story phenomenon, the movie tells the story of Oliver Barrett IV (O’Neal), a Harvard student, and Jennifer “Jenny” Cavalleri (Macgraw), a classical music student at Radcliffe. They fall in love. They frolic in the snow. They decide to marry. Oliver is heir to Barrett family fortune. Jenny is working class.  Oliver’s father disapproves. The couple marries anyway, and old man Barrett vindictively cuts his son off without a nickel.  The couple struggles, but perseveres. Jenny falls ill and dies. The music swells. The audience cries. The credits roll. The box office hums. Movie history is made!

“What can you say about a twenty-five-year-old girl who died? That she was beautiful and brilliant? That she loved Mozart and Bach? The Beatles? And me?” and “Love means never having to say you’re sorry.”

The latter is right up there with “Play it again Sam,” “Frankly my dear, I don’t give a damn,” and “Come up and see me sometime!”

How could anyone who remembers Love Story pass on the opportunity to see Oliver and Jenny reunited – alive and in person – nearly 50 years later.

Of course, Love Letters is not Love Story, but there are similarities, even beyond the titles. Written by Buffalo’s Pete Gurney, Love Letters is performed by two actors reading letters between childhood friends Melissa Gardner and Andrew Makepeace Ladd III, written over a period of nearly 50 years.

“You see?” enthuses O’Neal, “We are the perfect age to play these roles!  This is a play about looking back at your life!”

The letters begin with birthday thank-yous and summer camp post cards.  Melissa and Andrew continue to correspond through their boarding school and college years.  Andrew excels. Melissa flounders. They remain very close. And of course, the story ends in heartrending poignancy.

“I think that heartbreak is a necessary element of any good love story!” insists MacGraw.

She should know.  Love Story is widely regarded as one of the most romantic movies of all time.  It is certainly one of the highest grossing movies in history.

“And we are perfect for this love story,” adds O’Neal.  “I’ve been playing this character throughout my career!  From Rodney Harrington on Peyton Place, to Oliver in Love Story! and Oliver’s Story.”

O’Neal has a point.  “Andrew Makepeace Ladd III” even has the same cadence and social connotation as “Oliver Barrett IV.”

MacGraw and O’Neal are enthusiastic about their trip to Buffalo. Ryan has not been to our city since he did a telethon here in 1965, during his Peyton Place days. MacGraw has never been here before.

“Do you think Pete [Gurney] might come?” asks MacGraw. “We hear it’s his home theater! We’ve played some very large houses. We’re really excited to get to Buffalo and perform the play in a 625-seat theater. The play goes best when you can feel the presence of the audience.  We love that!”

“We have loved doing the show everywhere,” clarifies O’Neal.

“Yes,” agrees MacGraw. “We’ve performed the show about 70 times.  We’re on stage the entire time, about two feet away from each other, but never touching.  We can feel the presence of each other. Pete is such a brilliant writer. I appreciate how specific the writing and the blocking of this piece are. We are enjoying the opportunity to refine our performances with playing. One night, out of the corner of my eye, I saw that Ryan had moved. He’d raised his arm in a way he had never done before.”

“They storm the stage!” quips O’Neal.

I had met both Ryan O’Neal and Ali MacGraw before.  MacGraw, I met backstage after her performance of Festen on Broadway.

“That’s a good example of what I’m talking about,” says MacGraw.  “Festen did not belong in a large Broadway theater. The play needs the sense of claustrophobia that comes from a more confined space. That’s the way it was done in London. You need to have that feeling of being trapped, or the play does not work. Love Letters needs a sense of intimacy. We are looking forward to that in Buffalo!”

On the topic of Broadway, I am reminded that both O’Neal and MacGraw were represented for a time by Hollywood uber-agent Sue Mengers who died in 2011.  The German-born native of Utica, New York was the prototypical straight-talking foul-mouthed super-agent, with a razor-sharp wit. A true star-snob, her exclusive dinner parties are Tinseltown legend, and she represented most of Hollywood’s A-list talent of the 1970s, including Barbra Streisand, Faye Dunaway, Peter Bogdanovich, Joan Collins, Brian De Palma, Julie Harris, Gene Hackman, Steve McQueen, Nick Nolte, Burt Reynolds, Cybill Shepherd, and Cher.  Last season, Bette Midler played Mengers on Broadway in a one-woman show called I’ll Eat You Last.”  MacGraw and O’Neal saw the play multiple times.

“Bette Midler was superb as Sue Mengers,” says MacGraw.  “Sue was not just an agent, she was a good friend.  Of course, she always wanted me to live my life differently from the way I did.  But I thought Bette was fabulous and I love her.  At the beginning of the play I thought, Bette is just right to play Sue, but by the end, I’d forgotten it was a play.  Bette Midler became Sue Mengers for me.  I loved it.”

One part of the Mengers legend is that she tried to get producer Robert Evans to consider O’Neal to play Michael Corleone in The Godfather.

“That’s not true!” protests O’Neal.  “She never spoke to me about The Godfather. I was never up for any role against Al Pacino!”

Then, the actor pauses, and with his signature dry wit adds, “I was considered to play Rambo!”

Now, that would have been a much different film!

While Ali MacGraw retreated from Hollywood for the most part, eventually settling in New Mexico, Ryan O’Neal reigned as one of the top stars in movies for a full decade following Love Story.  His major films include What’s Up Doc! (1972) opposite Barbra Streisand and Madeleine Kahn in her feature film debut.  He was paired with Kahn again, and with his daughter, Tatum, in Paper Moon (1973). He played the title role in Stanley Kubrick’s Barry Lyndon (1975), a film that was not a huge hit at the time, but is now regarded as a cinematic masterpiece. He also starred in A Bridge Too Far (1977).

The lives of both stars have provided tabloid fodder.

“Thanks for reminding me,” O’Neal jibes.

Has either ever wished they had lived the life of the other?  Does O’Neal crave a life of privacy? Does MacGraw wish she’d made more films?

“No, I’ve never wanted her life,” deadpans O’Neal. “I’ve been to New Mexico!”

“Hollywood is worse now than it was in 1970,” opines MacGraw. “I’m glad that I was never subjected to the sort of disgusting press that exists today, and in so many instances, people invite it. They take the picture themselves and then call their press agent and pretend, ‘Oh! You caught me!’ It’s just a crass, faux moment.”

“Let’s talk about the play some more!” interjects O’Neal, not wishing to add anything to that line of thought.

“Love Letters does explore the intimate details of two lives,” he says. “It comes from a place of truth.  It is a moving story, and it is so beautifully written. We love doing the play. We love being together.  We love working together. Reading these beautiful words in this beautiful play, and getting to work with Ali. For me, that is a gift from God!”