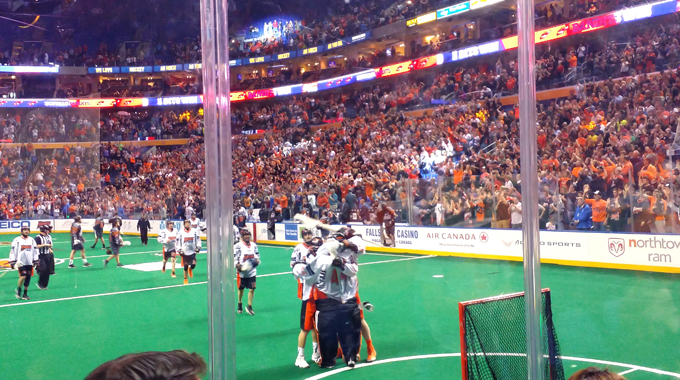 The Buffalo Bandits went farther this past weekend than they have in the last eight years. After a 20-15 win over the New England Black Wolves on Saturday night the Buffalo team is now in the Champion’s Cup Finals.

The Buffalo Bandits went farther this past weekend than they have in the last eight years. After a 20-15 win over the New England Black Wolves on Saturday night the Buffalo team is now in the Champion’s Cup Finals. All their social media features their new catchphrase: We Want Five.

Admirably, the Bandits always runs a lap around the arena at the end of the night as a thank you. It’s mutual love. Their fans can be heard cheering in the streets as they make their way to their cars long after the game is over. The two feed off of each other and that energy is what it will take to win it all.

For a quick recap: It was Game 2 of the East Division Finals. If New England won the match there would be a 10-minute mini game following the final buzzer. The fans in Banditland (their name for First Niagara Center on game nights) were loud and hopeful. The first quarter had the Bandits down 3-5. When they were tied 9-9 at halftime it was still anyone’s game.

The score reflected the intense match up of the two teams: both were determined to win and willing to play hard to get there. The goals went back and forth all night with the kind of nail-biting momentum that made this no easy Playoff game. At the end of the 3rd quarter Buffalo had a slight lead with 14-13 on the scoreboard. However, it was the last 3 goals in the 4th quarter that really cinched the title.

For the 14,255 fans in attendance the night was exciting. Both teams were penalized for fighting as frustration and passion fueled their gameplay. Cosmo had to rely on the defense more than usual with 35 saves on 50 shots. However, as lacrosse fans know, every second counts in this sport. The 30-second clock per play guarantees that the team and the fans are always focused on the time. So when Chad Culp made his 3rd goal of the night with 2:53 remaining on the clock the arena was still full. By the time Mark Steenhuis made his third goal at 1:08, which was a one-on-one penalty shot for an illegal substitution made by New England, the crowd was electric. Just 5 seconds later Alex Kedoh Hill made what would be the Bandits’ last goal of the night and his 4th in the game. Combined with Dhane Smith’s 4 goals earlier in the game and 3 from Ryan Benesch Buffalo’s top offensive players showed why they are so beloved by the fans.

Exhausting was the word of the night during post-game interviews but the Bandits will hopefully get their rest this week since they’ll be back at First Niagara Center this Saturday night. The first game of the Champion’s Cup Finals is May 28th at 7:30pm facing the West Division winner: Saskatchewan Rush.

If the Bandits can bring home the Championship Cup they will have accomplished what has been their goal since day one at training camp back in November. This means they need to win the best of 3 games in the finals.

Even though hundreds of fans stayed after the last game to purchase tickets early, there are still seats available at Bandits.com from $26 in the 300 level up to $45 a seat at 100 level center.