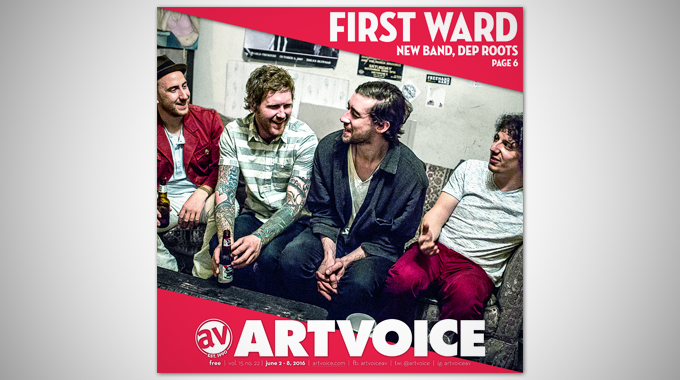 I think that is kind of the story of our band––that we have all been playing around Buffalo for at least 10-15 years, all of us in different bands and have done some tours and really put our dues in. And this came out of that.

In 2009 I remember walking into the Brickyard Pub in Lewiston, NY and hearing a cover of the Tragically Hip’s “Ahead By A Century.”  It was the first time I had heard of the Tragically Hip and it was the first time I heard singer/songwriter Zak Ward play.  I ran up to him mid song and was like, “what is this?!”  Ever since then, any time I would see Zak play out he would make sure that song made its way into the set.  My first impression of Zak was, this guy has an amazing sound, and has he since become one of my all time favorite musicians.

When Son of the Sun broke up in 2013, a band Zak fronted since 2008, he continued playing out––mostly cover songs at bar gigs––but he didn’t have an outlet for his original work.  So this past January he kicked off 2016 with a solo performance as First Ward on NPR’s Tiny Desk Concert Series contest.  Auditioning a hauntingly beautiful video, just his acoustic guitar and his clean melodic rock voice, Ward debuted “Clapper’s Bell,” an original song that will be featured in the band’s album primed to roll out later this year.

Like Ward, bassist Josh Mullin and drummer Steve Tripi have been running around the Buffalo music scene for well over a decade.  When Ward was asked to play a show at Nietzsche’s in early May, First Ward went from solo act to band and Zak immediately thought of Mullin and Tripi

Mullin moved to Buffalo to play with Last Conservative in 2005.  He also does graphics and web design, which he started out of necessity in junior high when the band he was in needed album work.  Steve Tripi, who Ward deems as one of the best drummers in Buffalo, was drawing hundreds with his band in his high school days to spots like the Showplace Theater in Buffalo.  Tripi still plays in Sixties Future, an all-American rock band out of Buffalo.  Guitarist Dave Harris, moved to Buffalo a year ago and spent the year observing the music scene and scoping out where he might fit, playing primarily underground punk rock type shows.  He came into the First Ward mix by way of Josh Mullin.  Mullin met Dave a year ago when Harris first moved to the city, and when he got the text from Zak he thought of Harris as a fourth member.

Sitting outside a downtown coffee shop with the four band members last week, they described the band coming together as a really organic process.  They aren’t shy about what life in the music industry can be like beyond the time spent under the lights.  The band opened up about the guilt that often comes with being a musician; the pressure to justify why you want to put music above everything else; especially since it’s something that often doesn’t produce enough resources to get by.  But they all contend that the music never stops because they just can’t bring themselves to not play, playing music is in their bones. 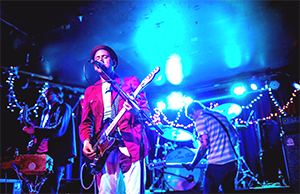 I did a little Q&A with the band and thought I’d offer it to our Artvoice readers.

How did the band come together?

Zak – Well it sort of just fell together. I got asked to play a show in May and I was like “well I want a base and drums for the show” so I sent a text to Josh and Steve and they were both into it.  We started rehearsing and it sounded good and we were thinking about maybe expanding our sound a little bit. (to Josh) You can explain how Dave Harris came into your life––but Josh said “I know this dude named Dave.”

Josh- Haha, he was just tooling around on this guitar that I had––just like a couch guitar and I was like “wow, dude you’re really good at guitar.”  And he was like “yeah man, I’ve played in bands at home and stuff.”  And I was like “dude, we’ve got to get you in a band.”

Dave- Yeah yeah, and then he promised me––he was like we’ve got to get you in a Buffalo band soon.  And I was like alright.  I mean this was a fucking year ago man, I had just moved here.

Who are your influences/ what is your sound?

Dave- I think it’s like a catchy songwriter thing from Zak’s imagination and blood and guts and whatever the fuck he has going on.

Josh- this is rock and roll, there’s really no style you can put on it. It’s not punk it’s not folk.

Zak- Yeah, I mean, I guess rock and roll, with a melody.  I try to write songs that I like but it’s definitely rock and roll, but with a focus on songwriting, you know?

Steve- Our influences span across so many different things it’s like tough to compare. One genre to another or one sound to another.

Where do you draw from musically?

Dave- I probably draw rhythm first and foremost from my father growing up. Like he would do a lot of rock and roll but he would also do surfer music and jazz. He played drums and he still does, he’s just a rock and roller and he’s a bohemian, so that’s first. Then I took a loving to melody when I first hear Led Zeppelin when I was hanging out in my room just a long haired 13-year old kid.  I felt like that was a pretty crazy moment.  I have melody in me but I also have rhythm so if you watch my right hand I do a lot of rhythmic stuff because I love rhythm through my father.

Zak- I mean I play music for a living so I’m playing music all the time and I’m always listening to how to play music.  That all comes together hopefully when I’m trying to write something.  As the main songwriter of the band I’m always trying to challenge myself or come up with something interesting or just something that I flat out like.  I definitely come from a family of artists, my parents were actors, well my dad was a director and my mom was an actress. I grew up in Niagara Falls.  So that’s a nice comment to Niagara Falls, when I just say I went to Niagara Falls high school and people are like whatttttt.

Steve- You made it out alive.

Josh- He only has like two bullet wounds (joking).

Steve – I def. grew up playing in that scene (punk), I actually started playing drums in like jazz ensemble in school.  So like 10, 11, 12 years old I was like really into jazz.  I didn’t know how to play rock and roll on the drum set––like I didn’t understand it.  So when I was like first starting to play with electric guitar players they were always saying hit the drums harder, hit the drums harder.  I couldn’t understand it. So when I got really into rock and roll, for me it’s all about good song writing.

Zak- I think that is kind of the story of our band––that we have all been playing around Buffalo for at least 10-15 years, all of us in different bands and have done some tours and really put our dues in. And this came out of that.

Steve- I mean Zak and I have been playing in shows together since we were like 16.  So we had kind of rolled in that, I don’t want to use the word emo that’s not the right word for it, but punk rock scene in the early 2000, so yeah early 2000 punk scene in Buffalo.

Josh- I moved here when I was 21, so whenever that would be.

Steve- I mean we’ve all kind of already banged each other.

Zak- Well there is a lot of musical talent in this town and it’s hard to keep a band together you know.

Dave- Unless you’re us though.

Steve- I would say to the “scene” finger quotes or what have you, the show that we just played at Nietzsche’s in early May there was a lot of competition that night.  There was a big show at Waiting Room there was a really big show at Town Ballroom there was another show at a basement house venue in town, all of which were very well attended and I look up on stage as I was setting up and Nietzsche’s was packed, packed.  And considering the competition level, I was extremely impressed by how many people still come out to support.  So as troublesome as things have been to some degree I think the last couple of years more people have been coming to shows than I can remember since the days when I was like 16 years old. There was a lull for a long time

Josh- There really was.

Steve – But it’s coming back.

Zak- Yeah live music is coming back a bit.

When do you plan to drop your album?

Zak- we are hoping to have a record out by the end of the year – that’s the goal yep.

Josh- I always like being in a band that I am proud to be in. That’s always kind of a thing. I feel like I have a pretty good track records of bands that I’ve been in and I’d like to keep that going. So like this last year has been the first that I had a semi substantial lull in playing shows. And so I was really excited when I got the text from Zak, especially hearing that Steve was involved. That was a very cool message to get.

Zak- I mean I think if you can take away anything it’s that we hope for the best but we are not expecting anything – the hope is that we can make a good record and play a few good shows.

Summer where can we see you?

Dave- Going to be a swank party in Williamsville. I’ve never really been out there.

Josh- No it’s not going to be swanky at all it’s a huge beer tent.

Are you happy to be out of Buffalo ?

Josh- Oh my gosh I love Buffalo, especially right now it’s experiencing, it’s something really cool to be a part of.

Zak- Yeah we got a front seat at the renaissance of Buffalo definitely.

Josh- It’s making it easy to be in Buffalo right now.

Dave- I think you got our premise right––like new band gotta check us out.