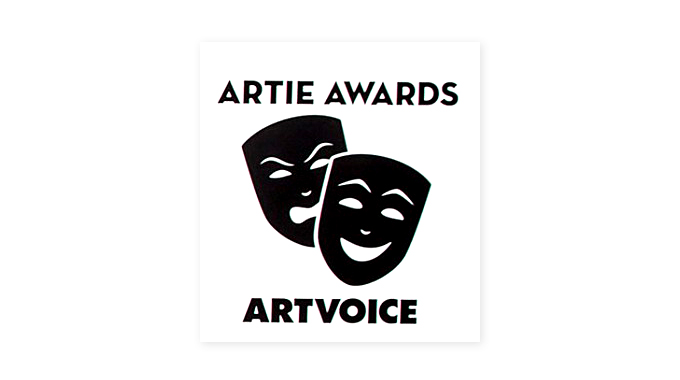 The 2016 winners are listed below. As always, this is an undertaking of gargantuan proportions, and all for two good causes: to celebrate Buffalo’s amazing theater community, and to raise funds for the Lifeline Foundation @ ECMC.

Another edition of the Artie Awards has come and gone. The 2016 winners are listed below.  As always, this is an undertaking of gargantuan proportions, and all for two good causes: to celebrate Buffalo’s amazing theater community, and to raise funds for the Lifeline Foundation @ ECMC.

Now it’s time for my thank you speech – which would have been too long for Artie night!

Many thanks to co-hosts Charmagne Chi and Amy Jakiel who were funny, glamorous, and charming as they deftly kept the evening moving – and for the “Hamilton” parody they wrote for the opening number.  Thanks, as well, to music director Allan Paglia who was terrific as he provided a thousand clever musical embellishments.

Thanks to Peggy Farrell for performing at the Arties for the 26th time and to Mike T. Jones who accompanied her, to Karen Nemeth for helping with stage management for the 26th time, to stage manager Mary Sheridan, to Thomas Evans who ran the slides and video like an expert without a rehearsal. Thanks to Doug Weyand for creating that slide and video show, including hunting down all the photos, and for gazillion little tweaks and assists. Thanks to Bobbie Scott for the hospitality. Thanks to the Artie committee for a year of devoted theater going, and certainly to Tom Dooney for working on the ballot, and to Donna Hoke and Sheila London for helping roll it out.

Thanks to Tony Conte of Shea’s and the staff at 710 Main for allowing us to use their space and for helping with everything. Thanks to all the presenters and performers. Thanks to the Shaw Festival for sending Laura Hughes from their Communication department with actors Thom Marriott and Shawn Wright from the cast of Mrs. Warren’s Profession; we hope you made a lot of friends that night.  Thank to Shea’s presenter Albert Nocciolino for making the trip to Buffalo for the event, in support of Tony Conte’s Career Achievement Award. Thanks to all the winners for being gracious to those who didn’t and to those who didn’t win for being gracious to those who did! Thanks to Jamie Moses and Seth Hughes of Artvoice. Thanks to Funky Monkey Nite Club for a swell after party! Thanks to the participating theaters for selling red ribbons. Thanks as well to everyone who came to the Arties and to everyone who, in my state of exhaustion, I may have forgotten!

OUTSTANDING PRODUCTION OF A PLAY
Of Mice and Men, New Phoenix Theatre

OUTSTANDING PRODUCTION OF A MUSICAL
In the Heights, MusicalFare and Raices Theatre Company

OUTSTANDING ENSEMBLE OF A MUSICAL
Ring of Fire, MusicalFare

OUTSTANDING DIRECTION OF A PLAY
Daniel Shanahan, The Shipment

OUTSTANDING ACTOR IN A PLAY
Larry Rowswell, Mark of Cain

OUTSTANDING ACTRESS IN A PLAY
Kate LoConti, Outside Mullingar

OUTSTANDING ACTOR IN A MUSICAL
Ricky Marchese, In the Heights

OUTSTANDING SUPPORTING ACTOR IN A MUSICAL
Kevin Craig, How to Succeed…

OUTSTANDING SUPPORTING ACTRESS IN A MUSICAL
Melinda Capeles Rowe, Stompin’ at the Savoy

OUTSTANDING SUPPORTING ACTOR IN A PLAY
Gregory Gjurich, End of the Rainbow

The Conjuring 2 Provides Chills, Thrills Whether It Happened Or Not
On the Boards, presented by Irish Classical Theatre
Comment