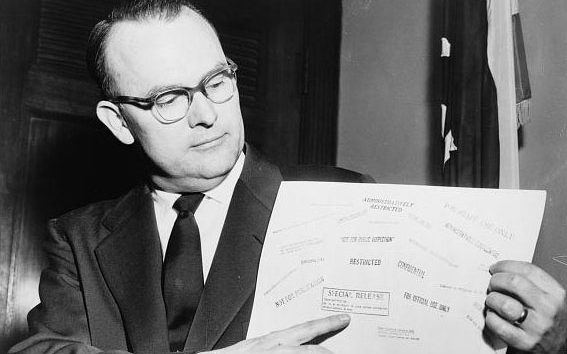 LYNDON JOHNSON HAD TO BE DRAGGED KICKING AND SCREAMING

On July 4, 1966, President Lyndon Johnson advised his press secretary Bill Moyers that he signed “the f—ing thing”, which is how Johnson referred to the Freedom of Information Act.

According to Moyers, “LBJ had to be dragged, kicking and screaming, to the signing ceremony. He hated the very idea of open government, hated the thought of journalists rummaging in government closets, hated them challenging the official view of reality.”

Unfortunately, 50 years later, in 2016, New York Gov. Andrew Cuomo down to village board members feel the same way about open government. Understanding the history behind the Freedom of Information Act may be as important as continuing the fight for open government today.

In 1952 John Moss was elected to represent the Sacramento area of California in Congress. It was the era of Senator Joe McCarthy’s witch hunt in which many people including Moss were wrongfully accused of being Communists.

While serving on the House Post Office and Civil Service Commission in 1954, Moss learned that 2,800 federal employees were being fired for “security reasons”. Moss asked for the records regarding the firings and his request was flatly denied. News reporters complained to Moss that they likewise had difficulty obtaining information from government officials. In 1954 Moss introduced legislation to make government records available to the public.

The Government Information Subcommittee noted many instances of federal agencies refusing to release information, such as:

the National Science Foundation stating it would not be in the “public interest” to disclose competing cost estimates submitted by bidders for the award of a multi-million dollar project;

the Navy ruled that telephone directories fell within the category of information relating to “internal management” and could not be released;

The Postmaster General ruled that public was not “directly concerned” in knowing the names and salaries of postal employees;

Twenty-four separate reasons were used by federal agencies to deny releasing information including: “top secret”, “secret”, “confidential”, “official use only”, “non-public”. Due to the efforts of Congressmen Moss all of the above items and more are now made available to the public.

At the local government level the Freedom of Information Law and NY Open Meeting laws are often violated due to the ignorance of elected officials or an unwillingness to comply with such laws.

I envision a board of directors consisting of attorneys, journalists, activists, academics, grant writers, and tech geeks. The first meeting for this organization will take place on Tuesday June 28th, 5:00 p.m. at the Partnership for Public Good office located at 617 Main Street (the Market Arcade Building) in downtown Buffalo. If you are interested in attending or would like more information, please contact me at paulwolf2@gmail.com.