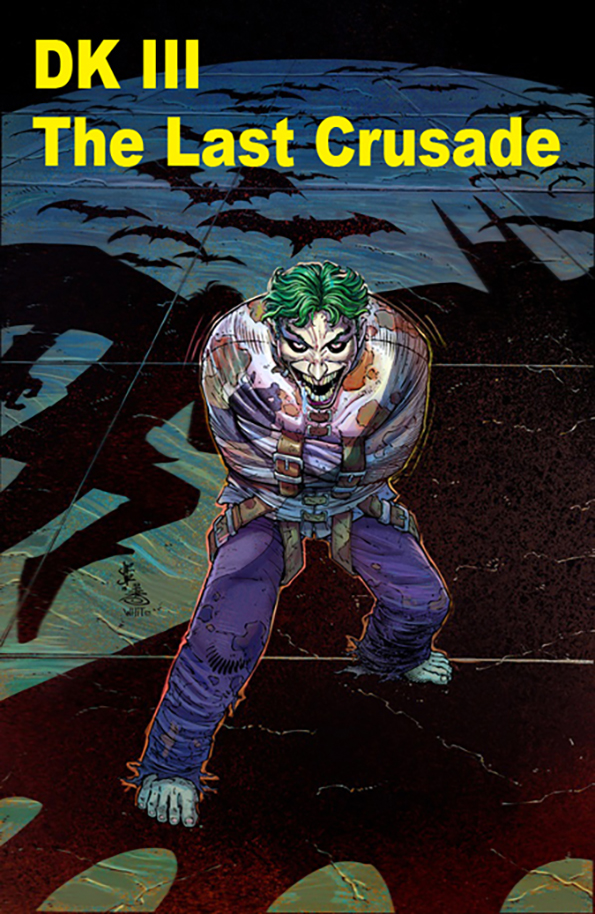 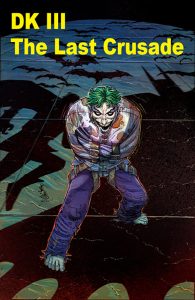 By Frank Miller and Brian Azzarello (Authors) and John Romita Jr. (Illustrator) DC Comics (Publisher)
Review by Joe Tell.
The Dark Knight Returns: The Last Crusade is a prequel to the legendary 1986 comic book mini-series Batman: The Dark Knight Returns. For those of you unfamiliar with The Dark Knight Returns, the series was both immensely popular and critically acclaimed. The Dark Knight Returns is truly a masterpiece of storytelling and arguably the best Batman story of all time. Many elements from the latest DC movie, “Batman v Superman: Dawn of Justice,” were inspired by The Dark Knight Returns. John Romita Jr.’s artwork for The Last Crusade is highly reminiscent of Frank Miller’s dark and gritty style on the original series. Romita’s stylistic art packs a heavy punch as he pencils in some violent, hard-hitting action; the bloody fight between Batman and Killer Croc is very brutal. The story highlights the relationship between Batman and Robin and how it is affecting the emotional state of Bruce Wayne’s young ward, Jason Todd. There is a growing tension between them as the brutality of endless nights of violent crime-fighting are beginning to take a physical toll on Bruce Wayne. The book reveals a vulnerable side of Bruce as he confronts his legacy and realizes that his days as Batman are numbered. Jason and Alfred Pennyworth, the butler, seem to think that Robin is ready to take over the mantle of Batman but Bruce disagrees. The narrative also focuses upon the Joker’s mind-bending psychosis as he brainwashes the inmates of Arkham Asylum and uses them to help him break out once again. As the book reaches its tragic climax, we learn that Bruce Wayne is correct on his judgement of the rebellious and headstrong Jason Todd. 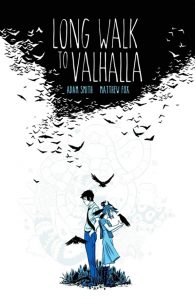 By Adam Smith (Author) and Matthew Fox (Illustrator)
Boom! Studios/Archaia imprint (Publisher)
Review by Jack Dumpert.
The Eisner Awards, named for comics pioneer (and creator of The Spirit) Will Eisner (1917-2005), are the comic book industry’s equivalent of the Oscars, Emmys or Grammys. To be nominated in the graphic novel category, a genre generally credited as having been created by Eisner in 1978 with A Contract with God and Other Tenement Stories, is a sort of double honor. Among the five nominees this year is Long Walk to Valhalla, the debut graphic novel by Adam Smith and Matthew Fox. In the book, which its creators call a “Southern fable,” Rory’s car breaks down way out in the country. On his walk back to town, he is joined by Sylvia, who appears to be a young girl. But she tells Rory she’s actually Maiden of Odin, a thousand-year-old Valkyrie who takes warriors to Valhalla. She surely seems to know a lot about Norse mythology and a lot about Rory’s life: his troubled older brother to whom he’s devoted; his gawd-awful abusive father; and a tragedy that Rory has never been able to confront. “Today,” she tells him, “you’re gonna die.” Astute readers will recognize that we’re in Neil Gaiman country, where the supernatural is natural and sometimes even mundane. Smith’s engaging story is beautifully complimented by Fox’s illustrations, which inhabit the border between realism and cartoon. The coloring, all washes of shades of blue, adds a certain sense of poignancy. And if there was an Eisner award for design, the handsomely packaged Long Walk to Valhalla would be the hands-down winner. The 2016 Will Eisner Comic Industry Awards will be presented at the San Diego Comic-Con on July 22.

“The Ride” by Cynthia Hunt
AKRAM SHIBLY: A LIFE OUTSIDE THE BOX