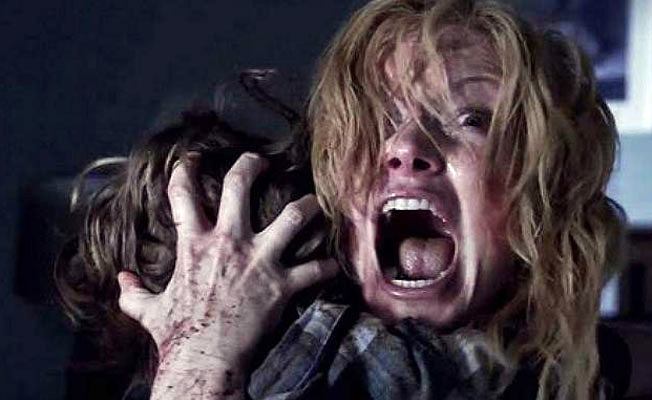 Swedish Director David F. Sandberg struck Hollywood gold when he released a three-minute short film called “Lights Out” directly on the internet. It went viral and was seen by a major producer who had the cash and connections to get it made into a full length feature that will be playing just about everywhere in Buffalo this weekend.

It is a scary movie, based on the premise that the mother, played by Maria Bello, has an imaginary friend named Diana who turns out to be a malevolent she-demon. “Lights Out” premiered earlier this week at the Los Angeles Film Festival.

The premise is simple. It starts with a batty mother and her imaginary friend, an estranged older daughter (Teresa Palmer) who left home following her father’s mysterious disappearance, and her half brother (Gabriel Bateman), whose own father has mysteriously died.

Realizing her brother is about to go through whatever it was she went through years earlier, she takes the boy, but is forced by Child Protective Services to bring him back. Rather than letting her brother face the terror alone, she returns with him.

Diana can only exist in the darkness, which is why the older sister suffers from insomnia, and most of the film takes place in the dark with illumination provided by flashlights, candles and whatnot. It gets scary very quickly and stays that way until the end.

Comparisons have already been made between “Lights Out” and “A Nightmare on Elm Street,” which are fair enough. Like Diana, Freddy Krueger was a malevolent demon who preyed on children in their sleep and – like Freddy Krueger – Diana comes equipped with a set of wicked fingernails capable of carving wood and shredding carpeting.

But where “Nightmare” made considerable use of special effects to achieve its scares, Sandberg and Director of Photography Marc Spicer depend on nuance and lighting to set the stage.

The movie’s 80 minutes long, and about 10 minutes of that is devoted to explaining – twice – how the evil demon Diana was created, first in a flashback scene and then as the older sister explains it to her brother. That we could have done without one of the two, or maybe even both of them, is the one rap that can be made.

The cast is uniformly fine. Bello’s mom off her meds performance is spot on, Palmer’s concerned daughter dealing with her own issues is familiar and Bateman’s wide eyed fear is perfect. But of course the picture is stolen by Alicia Vela-Bailey, the Hollywood stuntwoman who plays the crazed demon Diana.

There are a lot of movies coming out this weekend, but you won’t find a scarier one than “Lights Out.” And the rags to riches story of the film’s director makes this PG rated feature all the more compelling.