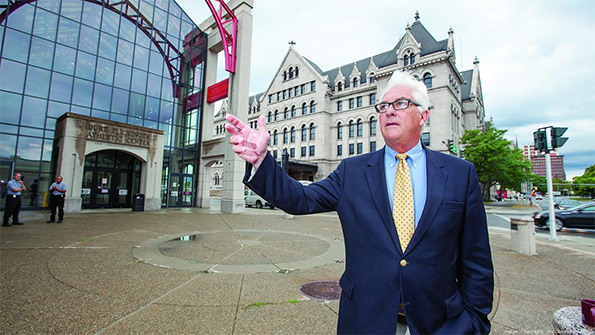 Jack Quinn’s strong political connections helped land him the job as president of Erie Community College back in 2008 even though he lacked the academic credentials normally required for the position. Now that Quinn has announced he will retire next June, sources say it is unlikely another politician would be able to win final approval from the State University of New York (SUNY) to lead the college, which is struggling from declining enrollment and severe financial problems.

A former high-ranking ECC official, who declined to speak on the record, told me “I don’t think SUNY would go for another politician,” given the serious problems the college faces, some of which insiders blame on Quinn’s tenure punctuated last January by a scathing state audit report that criticized the lack of oversight of college resources under Quinn.

Quinn could not be reached for comment, but in a press release new Board Chairman Dennis Murphy said the board will vote today (Aug. 25) to accept Quinn’s retirement request and create a 10-month transition plan and name a search committee with the goal being to have a new president in place a year from now.

Perhaps the most serious problem facing ECC is declining enrollment, which has forced the college to raise tuition and raid the reserve fund over the last several years.  And that condition may get worse in the immediate future.

When Quinn was hired in 2008 as ECC president after a 12-year stint as a Republican member of Congress (1993-2005), the full-time equivalent enrollment at ECC was 12,170, according to the college website.  The 2016-17 projected enrollment in the budget is 10,520 and sources say if that number is high, as many think it will be, it will further damage the school’s financial picture with less tuition money coming in.  The final enrollment figures won’t be known for sure until early September even though classes begin Aug. 29.

Quinn’s announcement comes as work begins on the $30 million STEM technology building at the Amherst North campus, which, according to Murphy, is a result of Quinn’s leadership.

In remarks published in the Buffalo News, Murphy said, “If it wasn’t for Jack Quinn, that building would not be happening.”  The building is finally moving forward after years of delay but many believe the final cost will far exceed the $30 million price tag that has been used given all the delays, including a challenge from a contractor and no budget to furnish the new building. In a news release announcing his plans to retire next year, Quinn said “I’ve had a great career in public service and I’m proud of what I’ve done serving the people and the students of Western New York.   I’m going out on a high note and I’m pleased with ECC’s progress:  We break ground on a $30 million STEM building this week and our $6 million nanotechnology wing will be finished next year.  This will help us meet the promise that each student walks out of our college ready to go anywhere and do anything.”

ECC is the second largest college in Western New York, and while Quinn has a master’s degree in education, he does not have a PhD in higher education, which is often– but not always–necessary for such a position.  And he also lacked the ground-up experience in higher education that would groom a candidate to lead such an institution.   Quinn currently earns $192,500 in salary from ECC and also has income from several outside positions including on the board of California-based Kaiser Aluminum.  Many insiders have quietly criticized Quinn for being in effect a “part-time” president given his other projects, but he was able to hold on to support from the ECC board although according to some former board members, they were often kept in the dark on his outside pursuits including his behind-the-scenes bid to become president of the Buffalo Niagara Partnership a few years ago.

But Quinn did have lengthy political experience locally and in Washington and during his tenure at ECC he has had strong control over what some critics have charged was a go-along board of trustees which came in for serious criticism for lack of oversight on Quinn’s hiring practices involving his senior staff in the critical state audit.   The report said Quinn made his hiring decisions and handed out raises in bonuses in many cases without board approval, as was required.   A corrective plan is now in place and we will revisit the progress of that plan in the near future.

As for Quinn’s legacy, it may be some time before it can finally be written when it comes to ECC.  While he cited personal issues in announcing his plans to retire, sources say he may have no longer had complete control of the board given several new members, and one of his top supporters at SUNY, Chancellor Nancy Zimpher, is stepping down.

The search committee that will soon begin work to find a new president will have to follow state rules in that search, as did the last committee which was able to complete its work for about $20,000, that including receiving and protecting 52 resumes.  If a headhunter is required, that cost could easily exceed $100,000.

“This is a critical time for ECC,” said GOP County Legislator Kevin Hardwick in an email.  “The next president must have a clear plan for tackling the college’s many challenges, as well as the experience and skills to implement the strategy.”

Hardwick, who helped build consensus to settle the long-standing dispute with the ECC’s faculty union, is a logical choice to play a major role with the new search committee given his experience dealing with ECC’s many challenges and his willingness to step on political toes when necessary to try and get things done.  Hardwick is right; this is a very critical time for ECC and politicians should not apply.  The new president should have the skills and experience, as Hardwick said, to lead this important institution and training facility in the years ahead.

For the record, Chairman Murphy contacted me at press time and agreed to answer questions about the search committee process.  We will meet with Chairman Murphy and report on that interview in next week’s newspaper.