In this weekend’s The Buffalo News, this news story indicating that Congressman Brian Higgins is raising criticisms and concerns that the Erie Canal Harbor Development Corporation has gone astray from its task of developing the Inner Harbor and Outer Harbor.

The biggest question I have is why has it taken this long for Congressman Higgins to come to these realizations and conclusions?

The Erie Canal Harbor Development Corporation’s entire history is a legacy of construction delays, cost overruns, failure to follow its mission statement of development of the Inner Harbor in a timely manner, and have lorded over a development district which should by now be a world class waterfront destination, but instead is a hot mess of portable toilets, shanties and shipping containers, painted chairs and other assorted bric brac.

Congressman, consider just these shortcomings or failures, all occurring these past five years:

1) In 2011, the ECHDC signed a $21-million contract with Dipizio Construction to build the historically aligned canals on the Aud Block. It was an eight month project, yet it took three years to complete. Delays, overruns, firing of the contractor, a whole summer wasted while a new contractor was secured, and now Dipizio is suing the state for tens of millions for what they say is their unjust termination. Their case looks very strong. We’ll be on the hook for millions. We’re already paying millions just for the legal fees.

2) In 2013, the ECHDC downgraded the east canal to a water feature, again at the cost of millions. The seasonal fountains look very nice, especially at night, but did anyone think of doing utility relocation while that entire parcel was dug up, to make that development parcel across the street from 716 shovel ready? Of course not! Hofbrauhaus in our future? Only once someone figures out who will now pay for that expensive underground work.

3) New buildings? Along with the 2009 MGPP came pretty renderings of a dynamic live-work-play district for Canalside that would be truly a great destination. But consider this – other than a snack shack, not ONE single structure has been built. In the pipeline is a children’s museum and a pavilion to hold a solar powered carousel. Of course, those construction deadlines keep getting pushed back into the future, with no specific timetable.

4) Instead of permanent structures, there are oceans of port a potties. With all that NYPA relicensing money in the bank, would it be so difficult to design and build a permanent comfort station? I believe the MGPP called for such a structure on the north side of Scott St almost directly under the Skyway, along with an information center. Why cant this being done?

5) The wooden central wharf, the cobblestone street grid, the lit up grain elevator, all very nice. Why do these public projects take so long to get off the ground?

6) The Webster Block. The ECHDC tried mightily to get their mitts on this parcel, but the City said no, and sent out RFPs instead. So what we have today is the magnificent HarborCenter, all thanks to the efforts of the City of Buffalo, and in spite of the ECHDC. Had the development corporation been successful in getting control of this valuable property, mark my words,..it would still be a parking lot, or a repository for some stupid urban garden, painted chairs, and of course, more and more and more portable toilets.

7) The north Aud block, a vacant pit, is an embarrassment and an eyesore. Yet there is no discussion on getting this parcel developed. It is quite astonishing that the private sector interests who spent millions developing HarborCenter and One Canalside have been so patient while this decrepit mess sits vacant with no plans in sight.

8) The development corporation boasts a larded public payroll of administrators, engineers and communication specialists, but their day to day work pretty much consists of overseeing a concert schedule, lawn games and artisan markets. Perhaps picking out flavors of ice cream to be sold at the snack shack. 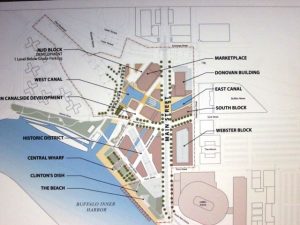 You ask what to do, Congressman? I suggest a summit meeting with the state officials, its ESDC subsidiary, the city and county leaders who sit on the ECHDC board, and lay out a specific timeline and performance targets for the buildout of Canalside within a reasonable time frame. the 2004 Master Plan and the 2009 MGPP are compelling and still relevant blueprints. Either develop according to plan, or bring in another entity who will fulfill that mission statement.

Andrew Kulyk covers Buffalo Sabres hockey and Buffalo Bisons baseball for Artvoice, and sometimes opines on politics, items of local interest and development issues. The opinions and commentary contained here are his own. Follow Andrew on Twitter @akulykUSRT.