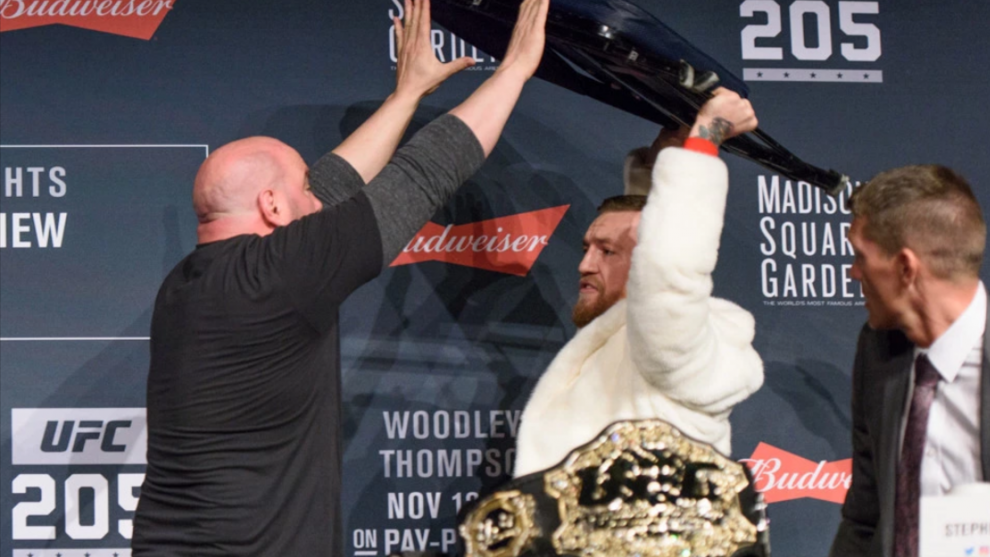 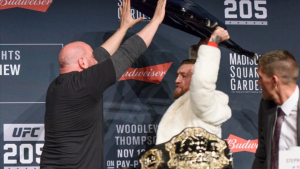 Madness ensued once again at Madison Square Garden today for the UFC 205 Press Conference. The Notorious Connor McGregor lived up to his name as only he can. The 145lb champion was nowhere to be found as UFC President Dana White called the event to order before the capacity crowd of 5,500 screaming, cheering, chanting fans. McGregor’s opponent, 155lb champ Eddie Alvarez, was none to pleased with neither the absence of the Irish superstar, nor the jeers and cusses he was getting from McGregor’s die hard fan base.

After repeated call outs on Alvarez’ part went unanswered by McGregor, Alvarez got up and walked off stage as he said “call me when he decides to show up.” Some time later, after UFC President Dana White’s repeated assurance to fan’s that “he’s here, he’s here. McGregor is here I promise” instantly brought the raucous crowd to chants of “Ole Ole Ole” so powerful you could feel the vibrations in your seat, show up he did.

The historic nature of this event means that the building was packed with famous and noteworthy fighters not on the card and media figures, some of them public figures in their own right, from all corners of the globe. But, unless you’re a fight fan, you would not know it. When Connor McGregor walked into the Madison Square Garden Theater however, people half way back to Buffalo knew it. As McGregor walked onto the stage in a bright red outfit complete with a white fur coat the ear piercing screams turned to more chants of “Ole Ole Ole” as he grabbed Alvarez’s belt from the still empty chair and placed it in front of him. When you could eventually hear again McGregor, in response to being questioned on his absence said “I’m on my time. I do what the f**k I want.” Which only reignited the fire of the crowd. 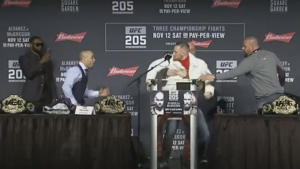 Alverez, however, returning to the stage to see McGregor sitting there with his belt and grinning like a cheshire cat, did so with a fire of his own. After snatching his belt back from McGregor all hell broke loose. With the nearly 6 foot tall, 217 pound Dana White physically unable to contain the two, security rushed the stage from both sides as chairs and bodies alike flew. As one grabbed a chair from upstretched hands of McGregor, another bear hugged the superstar and drug him to the far corner of the stage and others acted in similar fashion with Alvarez.

In any other sport, that’s a night folks thanks for coming out. But with Dana White and the UFC, the fans always get what they want, and these fans wanted more. So, as per White’s instructions, staff returned chairs, tables, belts and fighters to their original and upright position and security escorted the two headlining champions to their seats with newer and larger escorts to remain at their side.

With crowd on fire and on their feet for remainder of the discussion, it was difficult for anyone to understand much of the remaining conversation. That is with the exception of Alvarez demanding an apology from McGregor for things that were supposedly said in reference to Alvarez’s family. When that didn’t happen Alvarez, choose to let loose claims of his own, in that McGregor’s highly anticipated post fight announcement is, Alvarez claimed, that McGregor’s girlfriend is currently pregnant with not one but two of the superstar’s children.

Security, in the form of White and company, was needed once again at the post conference stare downs as things for physical both with McGregor and Alvarez needing to be separated. Woman’s 115 pound champion, Joanna J?drzejczyk, also took exception to inaudibles from her challenger, Karolina Kowalkiewicz. JJ, as she is better known, needed to be separated by White from Karolina K ensuring what fans from New York to their native Poland a barn burner in both men’s and women’s divisions.

If the UFC and New York City’s finest can contain these caged animals for just another 48 hours, UFC 205 is sure to go down in the history books. While Artvoice cannot tell you what the temperature outside Madison Square Garden will be on Saturday night, we can tell you this. Any sports fans that wasn’t watching, is now.

Keep it locked in here for more from Day 3 of UFC 205 Fight Week at tomorrow night’s official Weigh-ins.