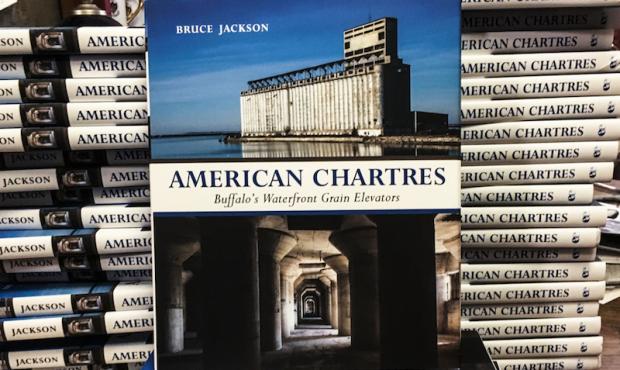 Books that matter for the holidays, 2016:

The top choices for 2016 gift-giving for Buffalonians near and far are likely to be two books that have recently been released: The Electrifying Fall of Rainbow City, Margaret Creighton (Norton), a terrific history of the 1901 Pan-Am Exposition, a new look at the moment often-regarded as the apex of Buffalo’s history, as well as the harbinger of its decline; and Right Here, Right Now, edited by Jody Biehl (Belt Publishing), a collection of essays about Buffalo now, written by current and former Buffalonians (full disclosure—I am a contributor, and Talking Leaves is co-hosting a publication release party with the publisher at the Market Arcade from 4-6 on Saturday, December 10th). Both books have much to say about the city, past and present. Bruce Jackson’s evocative and memorable collection of photographs of the grain elevators along the Buffalo waterfront, American Chartres (SUNY Press), will make it into a lot of area homes as well.

2016 has been a good year for fiction—both John Wray and Lauren Belfer (Buffalo-raised authors) released well-received novels in the spring (The Lost Time Accidents (FSG)and And After the Fire (Harper); both dealing in their own unique way with traveling through time. Colson Whitehead’s The Underground Railroad (Random House) conceptualizes the Underground Railroad as a literal underground track, with conductors and engineers, as he chronicles a young female slave’s bid for freedom, and in doing so meditates on our nation’s history of slavery and bondage.

Zadie Smith returns with Swing Time (Penguin Press) a tale of the linked lives of two brown girls who meet in dance class and their diverging searches for identity and meaning in their lives. Jonathan Safran Foer released Here I Am (FSG), a book about a collapsing marriage and a catastrophic earthquake in the Middle East, about the claims of history, family, identity in a broken world. In Everybody’s Fool (Random House) Richard Russo revisits the site and characters of his acclaimed Nobody’s Fool, three decades later, older maybe wiser, maybe not. Anyone who somehow overlooked the work of speculative fiction master Ursula LeGuin over the past half century has the chance to have that oversight rectified with a choice of new books: a Library of America publication of the Complete Orsinia, or two collections from Saga Press, Found and Lost: Novellas, and The Unreal and the Real: Selected Short Fiction.

Here’s five important non-fiction books that should make their way under more than a few trees this holiday season: White Trash (Viking), Nancy Isenberg, the first sustained look at class in the US in a very long time; Blood in the Water (Pantheon), Heather Thompson, a highly acclaimed look into the 1971 Attica Prison Rebellion and its aftermath; The Fire This Time (Scribner), an anthology of writings about race in America that responds to and updates James Baldwin’s The Fire This Time, 50 years later and in the wake of Trayvon Martin, Ferguson, and the like; Writing to Save a Life (Scribner), novelist John Edgar Wideman’s dissection of the Emmett Till case through a look at Till’s father and Wideman’s own history; and Alan Taylor, American Revolutions : A Continental History 1750-1804, a magisterial history of the nation’s founding. And two books with local connections: Thomas Grace’s Kent State, a new look at that famous incident and its aftermath by one of the students wounded by National Guard that day, a Buffalo native, and Almighty (Blue Rider), Buffalo born journalist Dan Zak’s investigation of a group of peace activists’ break-in, with bolt cutters and hammers, into the supposedly most secure nuclear facility in the US, and from that, into the state of the country’s nuclear defense industry and security.

As usual, there’s a wonderful new crop of books for children. Highlights include A Celebration of Beatrix Potter (Frederick Warne), tribute by 30 contemporary children’s authors and illustrators to their literary forbear and her rabbits, and A Child of Books (Candlewick), Oliver Jeffers and Sam Winston’s stunning prose poem on the rewards of reading and sharing stories. Buffalo’s Janet McNally will release her debut young adult novel, Girls in the Moon (Harper), next week—a Buffalo teen’s search for truth and her own voice in a family of complicated and contentious storytellers and story evaders.

You’ll find these and plenty more to give and receive, to read and to hear, as you explore the iceberg these books are just a sampling of the tip of, at independent bookstores across the country and in your hometown. Shop local to infuse much-needed capital into our local economy—thus giving the gift of books to your friends and family, and of increasing economic stability to your hometown.

On the ground in Buffalo, New York, or on the web at www.tleavesbooks.com

HIT LIST: THINGS TO DO THIS WEEK
GRAPHIC TRAFFIC