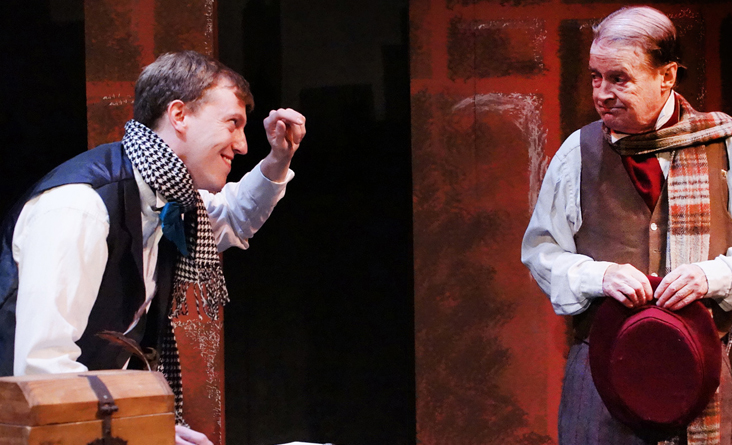 Road Less Traveled has mined the works of Charles Dickens, and playwright John Hurley has devised a stage version of the 1844 tale, “The Chimes: A Goblin Story of Some Bells that Rang an Old Year Out and a New Year In,” written one year after his more familiar “A Christmas Carol.”

Richard Lambert of the New Phoenix Theatre has concocted an adaptation of Carlo Collodi’s 1883 classic, “The Adventures of Pinocchio,” called, “Buffalo Pinocchio.” 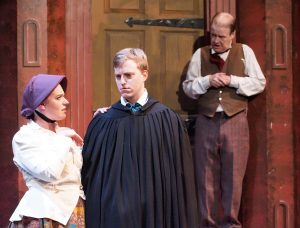 THE CHIMES, A GOBLIN STORY

Opening on Friday, Dec. 2nd, “The Chimes, a Goblin Story” features actors Andrea Andolina, Gerry Maher, Lisa Vitrano, Nick Lama and Steve Brachmann under the direction of Hurley.  These five actors play nineteen characters in what the company is calling “a warm-hearted fable of fun and fright.”

Set on New Year’s Eve, “The Chimes,” introduces old Toby Veck and his daughter Meg who have “little in life except each other’s love.” When the ancient church bells chime at midnight, the “Goblins of the Bells” teach Toby a frightening lesson about what it really means to be rich in life.

“Dickens took the formula he’d created for ‘A Christmas Carol,’ and he inverted it,” says Hurley.  “Instead of Scrooge, a rich man who is selfish and cruel, we follow a poor man who has love in his life but takes it for granted.  It’s like ‘A Christmas Carol’ mashed up with ‘It’s a Wonderful Life’!”

Hurley explains how he happened upon “The Chimes.”

“Scott [Behrend] and I had been looking for a Christmas play, and we realized that there are really very few good ones, and they are done all the time.  “A Christmas Carol” is done everywhere, because it is wonderful.” In Buffalo, Alleyway Theatre is known for their popular version adapted by Neal Radice.

Indeed the repertoire is fairly predictable, even when we toss in “It’s a Wonderful Life,” Dr. Seuss’s “How the Grinch Stole Christmas,” “Little House Christmas,” “A Christmas Story,” “Miracle on 34th Street,” and the like.

“We began reading scripts, looking for something as good as the well-known shows,” Hurley continues.  “We were thinking it would be great to find a good Victorian Christmas ghost story, along the lines of ‘A Christmas Carol,’ and that lead us right back to Charles Dickens himself.  I did not know that he had actually written five holiday stories back in the 1840s.  ‘The Chimes’ was the second of these, and we loved it.  It has characters you care about. It has depth but is also entertaining.”

Hurley reveals that the greatest challenge of the adaptation was to preserve the texture of Dickens’ expository and descriptive prose.

“The initial temptation when adapting something to the stage” he observes, “is simply to pull out the dialogue.  But if you do that with Dickens, you lose the most characteristic quality of his voice. The characters are vivid, and you can even tell what neighborhood of London they are from, but the story will no longer sound like Charles Dickens.  We had to find ways to preserve the author’s narrative voice. I hope we have done that!”

“Dickens is so full of political and social statements,” he notes.  “In this story, we hear comments about people not voting, and politicians on all sides condescending to the poor. The same observations could be made about society today!  Of course, being Dickens and a holiday story, he does provide a happy ending!”

“The Chimes, a Goblin Story” opens on Friday and runs through Sunday, December 18, at the Road Less Traveled Theater, 500 Pearl Street. 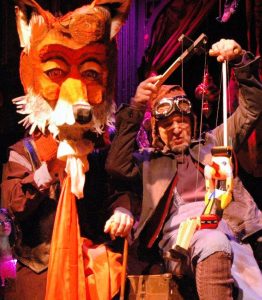 “The presidential campaign was just so upsetting for me,” Lambert reveals.  “And then Election Day confirmed my anxieties.  I was so in the mood for something optimistic and for a happy ending!”

Lambert’s “Pinocchio” is set in a post-apocalyptic Buffalo where a war is raging. A group of war survivors take refuge in an abandoned West Side theater, where an old man tells a story of life’s creation, the frustrations of trying to make plans for an unpredictable future.”

“I have been thinking about the idea of change,” says Lambert, “and of the anxiety and hope it brings.  He quotes Carl Jung, “Thoroughly unprepared, we take the step into the afternoon of life. Worse still, we take this step with the false presupposition that our truths and our ideals will serve us as hitherto. But we cannot live the afternoon of life according to the program of life’s morning, for what was great in the morning will be little at evening and what in the morning was true, at evening will have become a lie.”

“I started to think about ways to assuage the feeling of doom I was experiencing,” says Lambert, “and it occurred to me that there are times when the theater is the only place for comfort!”

“Over the past few years,” Lambert recalls, “we have done very well at the New Phoenix retelling classic stories with a new twist, from ‘Peter Pan’ to ‘Tom Sawyer.’ These are stories that explore societal mores, question our worldview, and comment on the change that is inevitable in life. This past year, with everything that has happened on the political scene, these issues were weighing heavily on my mind. Honestly, I found myself frightened that my way of life and my hope for the future was threatened. I was thinking, ‘there is no way in hell that this could be happening!’

Not taking life’s blessings for granted is a common theme in holiday stories.

Lambert refers to the magic created by the puppets.

“A puppet hangs lifeless on the wall,” says Lambert, “but when you pick it up, it comes to life and becomes what you want. When Betsy [Bittar] picks up the Blue Fairy, magic really happens.  Magic can happen!  That is our holiday message!”