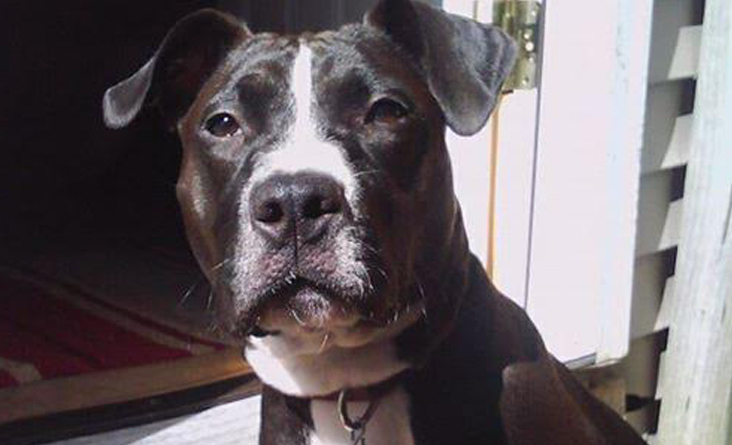 An expected lawsuit arising from the police raid of a Buffalo man’s home that resulted in the death of his dog, an 18 month old male black and white pit bull, is apparently proceeding.

The dog’s owner, Michael Urban was examined by a City of Buffalo attorney late last month, a precondition to the lawsuit against the City.

Police say killing the pit bull during a Buffalo Police Narcotics Division raid on the morning of July 29, 2016 was justified because the dog represented a danger to officers.

“While executing a search warrant (I) did fire one shot from a Glock 45 caliber in defense of a pit bull terrier killing same,” wrote Detective Charles Militello in his ‘Use of Force’ report on the incident.

But Urban says his pit bull, named Gotham, was no threat to police when he was shot in their second floor apartment on Weaver St.

Urban claims his friendly pit bull was looking calmly at Det. Militello when the detective shot Gotham in the head, splattering the dogs’ brains throughout the apartment.

No drugs were found on Urban or stored in his home. Based on the description of the suspect in the search warrant, police may have raided the wrong house. The hulking, red headed Urban stands more than 6’ 4” and weighs over 300 pounds while the suspect named in the warrant – allegedly a dealer in Suboxone – is described as blond haired, slender and less than 6 feet tall.

On Nov. 29, the City of Buffalo’s assistant corporation counsel, Maeve Huggins examined Urban and seemed somewhat concerned with Urban’s contact with local media concerning the killing of his dog.

During the examination, Huggins asked, “you make a claim for severe emotional distress and trauma…  What do you specifically mean by that?

Urban: I’m pretty messed up now. I don’t sleep, I don’t eat, I cry, I’m going to be going to counseling. I don’t know what else to say….

Huggins: Have you received any other medical or mental health treatment after this incident?

Huggins: Where do you plan to receive that counseling?

Urban: I’m not sure.  I was talking to an Army vet, and he was giving me a couple places for post traumatic stress.

Huggins: Were you injured in any way during the incident on —

Huggins: You mentioned that on that day you went to work and said you needed the day off but then were fired?

Huggins: Were you able to obtain employment after that?

Urban:  I’m — to be honest, I’m still not ready to go back to work but I need to start trying.

Urban responded: I wanted to get this out there. I want people to know what’s really going on in the Buffalo police force. Cowards. Suited and booted with an Army truck on my lawn…

Jami Krafchak lives in the apartment below Urban. Her home was also raided. No drugs were found at Krafchak’s apartment and it appears possible that police raided the wrong home since the target of the search warrant, a slender black man, does not match the description of Krafchak, who is white and female. Krafchak is also suing the city.

Photographs suggest that the bullet that killed Gotham went through Urban’s floor and into Krafchak’s apartment leaving a hole in her kitchen ceiling. Fortunately, Krafchak was in her bedroom when the bullet entered her kitchen.

During her examination, the city’s lawyer, Huggins asked Krafchak about Gotham’s “disposition”.

“He was very calm and friendly,” Krafchak said. “He was always on the front upper balcony and he would just wag his tail. He was a good dog and we never even heard him bark or anything….  Everyone in the neighborhood loved that dog. Take him for walks and the old ladies across — down the street would all come out.”

Huggins asked: Were you injured at all during the incident on July 29th, 2016?

Krafchak: Not physically, but emotionally definitely.

Huggins: What do you mean by that?

A word of explanation is in order here:

Krafchak claimed she was surprised out of bed at their 6:30 am raid, as a dozen police in paramilitary garb entered her house and surrounded her in her bedroom. Finding her in her bra and underwear, they manhandled her, she claims, and at least one officer began taking pictures of her with a cell phone camera before allowing her to cover herself with a robe. About the same time, a gunshot sounded from upstairs and a bullet came through the ceiling of her kitchen.

Krafchak explained to Huggins:  Every day when I wake up and I see that [bullet] hole, all of these feelings come rushing back and it’s hard for me. I can’t really sleep. If I hear a loud noise or if I hear trucks going up the street and they go over a bump or something, I jump. People who are close to me, if they go to put their hand near me, I don’t like people being near me, I don’t like being touched.

Huggins: Have you received any medical or mental health treatment as a result of this incident?

Krafchak: No, but I plan on going through…

Huggins: Could you describe how it’s affecting you at work?

Huggins probed Krafchak about media sources she may have spoke with then began to ask Krafchak if she “had any conversations” with City employees about the raid.

Krafchak: I mentioned it to police officers that I know….

Huggins:  What are their names?

Krafchak: ….  You want me to list all of them? Because I’ve spoken to about twenty of them.

After naming one officer, Krafchak said, “I don’t feel comfortable listing all the officers I spoke to off of the record about something that happened within their department”…

Huggins: I’m asking you who you had conversations with and who works for the City regarding the claim you’re making against the City…. I’m going to direct you to answer the question.

Krafchak: Okay. I don’t remember the rest of them.

Her lawyer, Albert intervened:  Are you afraid to say all the names?

Krafchak: Yeah, for sure, I’m absolutely afraid to say their names.

Huggins: Why are you afraid to say their names?

Krafchak: They weren’t involved with what happened, I don’t want them to get in trouble or something.

Huggins: Again, I’m just going to repeat, you’re making a claim against the City and they are City employees, so my question is who specifically have you had conversations with?

Krafchak:  I don’t remember the rest of them.

In trying to ascertain whether Urban and Krafchak were isolated cases, Artvoice reviewed the case of Adam Arroyo, a decorated Iraqi war veteran. Arroyo was at work on June 3, 2013, when a SWAT team from Buffalo Narcotics mistook his west side apartment for the actual apartment named in the search warrant and busted down his door.

His pit bull, a two year old female named Cindy, was killed by Detective Joseph Cook. This detective earned some notoriety after Artvoice revealed he led Buffalo Police in dog killings, having dispatched 25 dogs from 2011 to 2014. Det. Cook’s ‘Use of Force’ report states that shooting Cindy was in self defense. In fact, on every occasion he shot a dog, Det. Cook reported that he or other officers were in danger.  With deadly accuracy, Det. Cook only failed to kill one dog of the 26 he shot in recent years.

Arroyo disputes Det. Cook’s story and claims Cindy was tethered on a leash, which confined her to the kitchen and that she could not reach Det. Cook or other officers when they broke down the door. Officers could have called in animal control to place Cindy in a cage before conducting the search, he contends.

While the City of Buffalo admits police searched the wrong house when they entered Arroyo’s home, the City is expected to argue that the lawsuit has little monetary value since the market value of a pit bull is less than $500.

The case of Alicia Robinson, whose Rhodesian Ridgeback, the late ‘Sarabi’, was shot during a raid of her residence by Buffalo Narcotics Police is also pending in Federal court. Robinson’s attachment to her dog prompted her to rush to the side of the fallen animal, which permitted an errant bullet fired from one of the officers’ guns to strike Robinson.  She also claims she suffered bruising and swelling to her face when police slammed her head into the surface of her automobile after she displayed distress from witnessing her dog killed in front of her.  Police deny the allegation.

Then there is the case of Cory Meer, whose six-year old pit bull, Damian, was shot to death in front of Meer’s two-year old son. The toddler narrowly escaped death himself when officers kicked in the door to enter the residence, according to his father. The child had been standing behind the door a moment earlier.

As the toddler stood watching, and crying, Erie County Sheriff Deputy Chris Ginnare shot Damian who, he claims in his “Use of Force” report, was “coming down the stairs in an aggressive manner. As the pit bull charged within three feet … (I) had no other choice than to discharge my duty rifle (4) times at the pit bull in effort to prevent serious injury to myself and other SWAT members.”

Dr. Helene Chevalier, who performed the necropsy, wrote that Damian “was shot at a distance”.

The raid may have been a ‘wrong house’ raid since Meer had no drugs in his possession or in his house. He is suing the city.

Albert, whose aggressive style has pitted him frequently against police, said this about his clients.

“Comparative analysis of cases around the country however show damages are being settled by municipalities at figures that are commensurate with the pain and suffering that victims go through. Yet the City of Buffalo takes on a dismissive attitude towards these cases, and rejects the notion that their officers shouldn’t be shooting dogs at record rates. Are they taking this attitude because they don’t have much regard for dogs or because they don’t have any regard for the mostly minority and poor residents of Buffalo who own and cherish their dogs?”