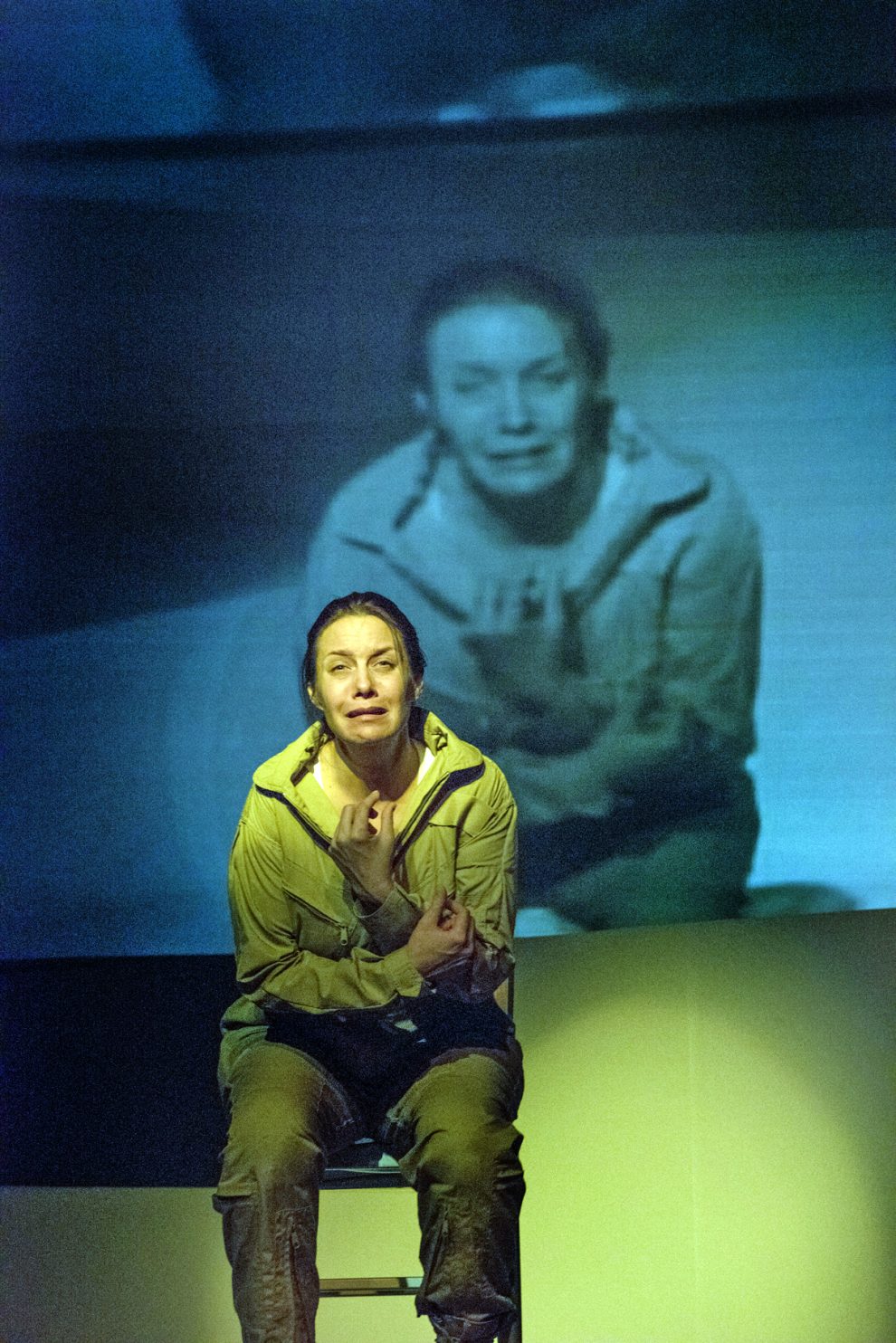 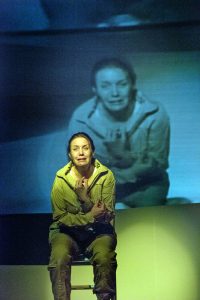 The Aleks Malejs phenomenon just seemed to sneak up on us.  Suddenly there was a beautiful and confident leading lady in town who disappeared into the characters she played and quickly landed roles that used to go to others. Her stage presence was radiant; her choices were smart and fascinating.  We saw her in Both Your Houses, Proof, The City of Conversation, Arrivals and Departures – all at the Kavinoky.  Then there she was in the coveted role of film star Alexandra del Lago in Tennessee Williams’ Sweet Bird of Youth at the Irish Classical Theatre Company.

Now she’s back at the Kavinoky, this time in Grounded, George Brant’s solo play about a fighter pilot assigned to drone duty. The play received high praise when it debuted in New York City in 2014 and again, when Oscar winning actress Anne Hathaway played the role at the Public Theatre a year later, in a production directed by Julie Taymor. Brant has created the portrait of a woman whose brash self-confidence is threatened by the realities of a technologically fought war.

At the Kavinoky, Kristen Tripp Kelley directs, with a multi-media set by David King and Brian Milbrand that incorporates projections and live video, as well as original music by Buffalo music legend David Kane. Aleks Malejs fans should be delighted to see the actor hold the stage, solo.

For those who want to know more about this luminous talent who swept into Buffalo with an acting degree earned in the Big Sky Country of Montana, ARTVOICE posed a few questions to her, which she has been most gracious to answer.

What is your “Why I came to Buffalo” story?

I was born here!  My family is all originally from Buffalo.  But in the ’80s, a lot of us migrated west. I’ve lived in Oregon, Arizona and Montana. I spent a decade in New York City studying and performing, and after 10 years I was seeking a change. I still have some family here and I thought, “While I figure out what I want to do, I’ll hang out in Buffalo for the summer.” That was in April of 2013. Well, I got a summer job teaching theater right away, and met some folks from the Kavinoky and asked to audition for “Proof”.  And the rest is history!  I haven’t stopped working since.  I’ve worked more here as an artist and a teacher in less than four years than I did during my ten years in New York City!

Where did you get your theater training?

I have a BFA from the University of Montana and an MFA from The New School for Drama in New York City.

What have been your most formative theater experiences?

All of my experiences have been formative in one way or another.  I think I really opened up as an artist in graduate school.  I was blessed to play Queen Elizabeth in Richard III.  I had never done Shakespeare.  It taught me that fear can be a healthy motivator.  I learned a lot about preparation and trusting my own work.  And I discovered how to own my powerful presence on the stage.  While I was having some insecurities, my director at the time said to me, “Be the leading lady that you are!”  That changed me.  I have been on a couple of National Tours with the Montana Repertory Theatre.  Those tours were really incredible — to be able to do a really long run.  The character development just never stops.  It’s wonderful.  And to be able to visit all of the beautiful theaters in communities all across America is an amazing way to see the country!

How do you feel about the one-person play experience?

Terrified.  There have been many days in the past few months that I have asked myself, “How am I ever going to pull this off?”  I have a confession to make.  I have never been a fan of a monologue.  I have struggled with monologues my entire career.  So isn’t it just hilarious that I am now doing a 55-page monologue?  It has been a grueling process.  So many words.  So much emotion both on and off the stage.  This experience has tested every part of my being: mental, emotional, physical and spiritual.  What I am starting to come to terms with is that it’s not about me, Aleks.  It’s about her.  The Pilot.  Her story.  George Brant’s story.  This VERY relevant story.  It is my job to tell this story.  And I will.

Closing this weekend, Grounded by George Brant at the Kavinoky Theatre runs through Sunday, January 22nd. For tickets, call (716) 829-7668 or visit kavinokytheatre.com.