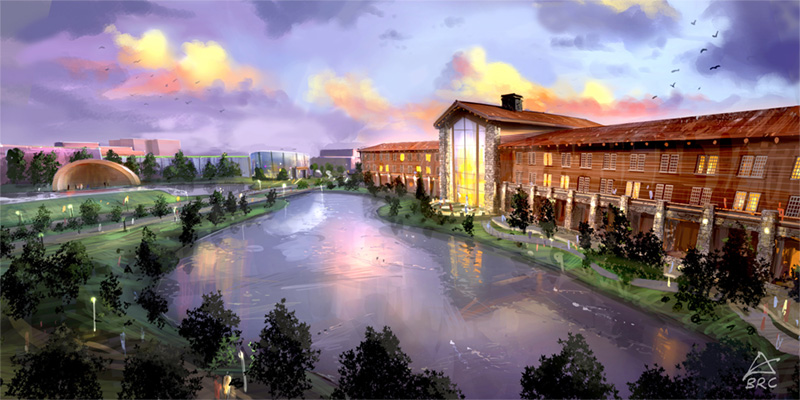 Gov. Andrew Cuomo’s controversial proposed “lodge” on Goat Island in the Niagara Falls State Park has been scaled up in size, according to design sketches posted by USA Niagara this week.

USA Niagara is a subsidiary of Empire State Development, the state development agency charged with “encouraging growth and renewal of the tourism industry in the City of Niagara Falls,” according to its mission statement.

According to www.niagaraexperiencecenter.org, a website maintained by USA Niagara, and updated recently with this new information, “The lodge will feature three stories of guest accommodations, 250 rooms in total, with a wraparound veranda offering breathtaking views of the Falls and State Park… Additional features of the lodge include an elegant main dining hall, smaller private dining rooms and a family health spa with a swimming pool and ‘green roof.”

At 250 rooms, the lodge is far larger than what Governor Cuomo and USA Niagara president Christopher J. Schoepflin have told the public recently.

Schoepflin said, “The lodge the governor envisions would have 75 to 100 rooms – ‘a very boutique property.'”

The news of a 100-room lodge on Goat Island caused an outcry of opposition decrying it as not in keeping with Olmsted’s plans.

The first mention of plans for a lodge on Goat Island came in a never-acted-on, 2014 USA Niagara Development Corp. Request for Proposals (RFP) which called for developers to consider proposing retrofitting the small, historic Calvert Vaux Carriage House on Goat Island into a “small inn.”

If built on Goat Island, it would be the first overnight accommodations ever developed in the Niagara Falls State Park, and a plan that was specifically opposed by Frederick Law Olmsted who designed the park and whose name is invoked in the state’s advertisements for the park.

Sergeant Aljoe takes first step in lawsuit against police who killed his dog in wrong house raid
Dux: A botched attempt to kill Trump adviser Roger Stone, or send him a warning? But who’s behind it?