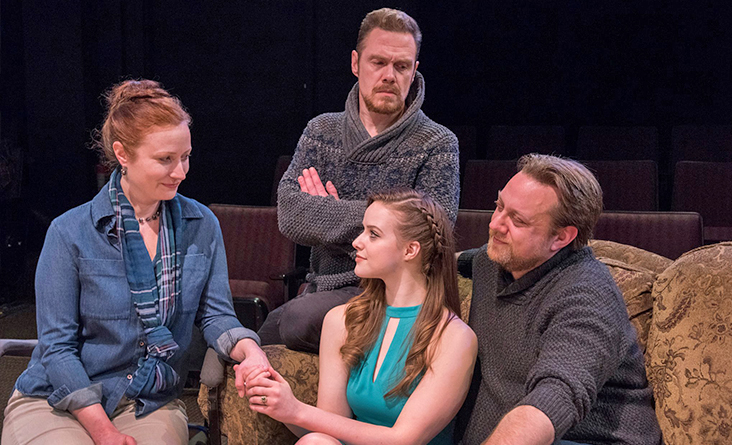 “Love is all truth; Lust full of forged lies,” or so Shakespeare would have us believe. In a medium that plumbs the depths of human truth, this week, three of Buffalo’s theaters explore the untruths that allow human beings to strut and fret our way through love. To be specific, these plays demonstrate how lies allow people to strike a balance between their sexual desires and their moral obligations — in other words, (sorry Shakespeare), the ways in which true love lies. 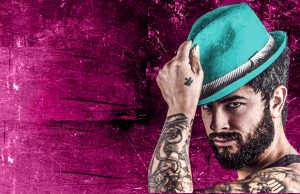 The Motherfucker with the Hat

I first became aware of playwright Stephan Adly Guirgis when the New Phoenix Theatre in Buffalo produced his script from 2000, Jesus Hopped the ‘A’ Train. A few years later, I saw his similarly sacred and profane work, The Last Days of Judas Iscariot at the Public Theatre in New York.

The attraction on the latter occasion was not so much the playwright as it was the cast, which featured Buffalonian actors Stephen McKinley Henderson as Pontius Pilate and Jeffrey DeMunn as the judge, in a play that imagined a trial for the apostle who betrayed Jesus. The moral juggling and clever reversals of that script stayed with me, however, and so when Guirgis finally made it to Broadway with The Motherfucker With the Hat in 2011, I was neither misled by the startling title, nor dazzled by the star power of a cast that boasted Bobby Cannavale and Chris Rock. This time, the playwright was definitely the attraction. I was ready for a play that makes the most masterful use of urban vernacular language since David Mamet, and offers shrewd insights into the moral ambiguities that people face every day.

In The Motherfucker…, Jackie is a former drug dealer, trying to put his life together after doing some prison time. He’s managed to satisfy the unending demands of his parole officer. He’s just landed a legitimate job. He’s even managing to stay sober despite living with his girlfriend, Veronica, who is an active drug user. Everything seems to be coming together for Jackie, until –just as he’s getting ready to jump into bed with Veronica for celebratory sex — something catches his eye. It’s a hat. It’s a man’s hat. And it’s not his.

What ensues is a frenzied ride through mistaken assumptions and bald-faced lies as Jackie tries to work through his obsession with the unidentified owner of the abandoned headwear.

Road Less Traveled Theater has some history with Guirgis. They produced a credible production of Last Days of Judas Iscariot and even hosted the playwright in Buffalo as part of their American Theatre Master series. Now, under the direction of Victoria Pérez, the company has assembled a compelling cast for a highly engaging production of The Motherfucker with the Hat.

Anthony Alcocer is a standout as beleaguered Jackie. A notably strong and charismatic actor, Alcocer often taps into his capacity for cartoon theatricality. Here, however, he shows another side of his talent, giving an entirely controlled and realistic performance.

The same could be said of Melinda Carpeles-Rowe, who plays Veronica. As the aunt in the recent Raices Theatre Company production of Karen Zacarías’s Mariela in the Desert, she was a presentational caricature.  Not this time. Even in bold, energetic, and often wildly comic performances that escalate into unbridled, unreasonable frenzy, both actors stay within the realm of believability and manage to evoke our empathy, a turnaround that is critical for the play’s conclusion.

The rest of the cast is also excellent.  Greg Howze Jr. walks the fine line between mischief and steady helpfulness as “Ralph D.,” Jackie’s seemingly devoted AA sponsor. Rolando Gomez is wonderfully endearing as Jackie’s cousin Julio.  Rosa Fernandez, while less experienced than her seasoned fellow actors, is especially good as the braying off-stage voice of Ralph D.’s wife Victoria, and manages to hold her own onstage as well.

Given the overall polish of the production, a miscalculated set by Lynne Koscielniak is somewhat of a surprise.  One apartment is meant to represent very different locations with minimal alterations, but the furnishings are far too specific to pull off this sleight of locale. Her use of New York City subway signs, however, is quite delightful, and the action is, frankly, too fast-paced for us to give the visual confusion much notice.

The production continues through April 2nd. 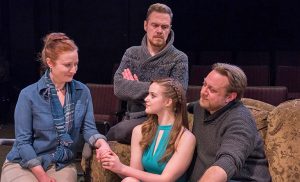 Bryan Delaney’s The Seedbed, now at the Irish Classical Theatre Company, follows a middle-aged Irish couple, Hannah and Thomas.  As the play begins, their once estranged teenaged daughter, Maggie, is returning home for a visit after a period of tumult, marked by boozing and promiscuity. The occasion, or so Maggie claims, is to help celebrate her parents’ 17th wedding anniversary. We soon discover, however, that this young woman has not been entirely truthful. This is the first of layer upon layer of deception. She is really home to introduce her parents to her fiancé, Mick, a man who turns out to be old enough to be her father, and to collect her things. Thomas does not react with enthusiasm.

The script begins with crisp efficiency, clever and economical writing that doles out the exposition easily and establishes the characters with clarity.  Once we get into the permutations of the family lies, however, events slog down.  Efforts to leaven the loaf with food prop mayhem come across as being contrived for theatrical effect. We begin to hear the same story again and again, and the march to the obvious conclusion feels burdened.

At the center of the piece is a powerful story of multilayered deception and illicit desire. The story varies, depending upon who is telling it, but unlike the Rashomon effect, the variations here are willful. Hannah and Thomas have lied about their marriage; they’re having trouble.  Either Hannah or Thomas is lying about why Maggie has run away – and why she has come back.  Only Mick seems to be innocent in this web of inadmissible deceit.

I kept wishing that Delaney had treated the entire play with the economy and power that characterizes its opening scene. Instead, we get lost in ruminations on his themes, an avalanche of heavy symbolism, and some pretty obvious attempts to generate theatrical excitement with unnecessary tricks. (That sort of food fight went out with the silent movies).

While the acting is good and the actors are seasoned and well-suited to their roles, the production, directed by Greg Natale, suffers from some mis-calibration in the casting. As Maggie and Mick, Arianne Davidow and Eric Rawski do not make an especially startling mismatch. Either she is too womanly, or he is too young.

An effort has been made to rough Mr. Rawski up in the costuming and by graying his beard, but in general, he is left adrift to play over the top of his character. With equal gifts for comedy and pathos, he does manage to pull pure poignancy out of Mick’s final realization that he has been used by the love of his life.

Ignoring her scene partners for the moment, Ms. Davidow is a superb actress, and renders the character beautifully, replete with her discomfiting contradictions.

Likewise, Kristen Tripp Kelley’s performance as Hannah is a revelation of nuance, as she allows her character to lose control by exquisitely perceptible increments. Chris Kelly gives a lively and entertaining performance as Thomas, but seems somehow too mercurial to hold the weight of this man’s darker desires.

With a handsome set by Paul Bostaph, this production continues through April 2nd at the Andrews Theatre. 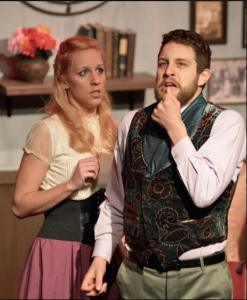 Director Jeffrey Coyle has a genius for absurd comedy.  For Curtain Up, he directed and starred in the musical, Urinetown, a blissful amalgam of comic invention.  He has now turned his humor to Steve Martin’s The Underpants, an adaptation of a 1910 German comedy by Carl Sternheim, now running at American Repertory Theater of WNY, 330 Amherst St.

The happy, if humiliating accident that sets this farce in motion has occurred before the play begins.  It’s Germany in 1910. Louise and her husband Theo have gone to a parade. While stretching to get a better view of the king, Louise’s panties somehow slip down around her ankles.

Theo is livid and convinced that their very livelihood is threatened by this scandal.

The play makes fun of middle-class pretentions.  It also skewers the repressiveness and inequality of middle-class marriage. The question here is, “What’s a woman to do when love, itself, is a lie?”

Theo is a controlling and unfeeling man. Louise is miserable in the relationship. Her life will change, however, when two men from the parade, witnesses to her embarrassing mishap, find their way to Louise and Theo’s home in order to rent rooms so they can be closer to the woman whose panties have ignited their passions. Presented with this opportunity, Louise tries to figure out how to deceive her controlling husband.

It’s all very silly, but like every good farce, the play has serious undertones. Coyle has assembled an excellent cast: Candice Kogut as Louise; David C. Mitchell as Theo; Ben Caldwell and Rich Kraemer as Louise’s ardent suitors; Michael J. Starzynski as a repressed would-be tenant; and Pamela Mangus as the oversexed older woman and official bad-influence of a neighbor.  All are well-suited to the comic types they play.

The production continues through April 1st.

ON THE BOARDS: What’s Playing on Area Stages
THEATER | STAGEFRIGHT by Javier Bustillos