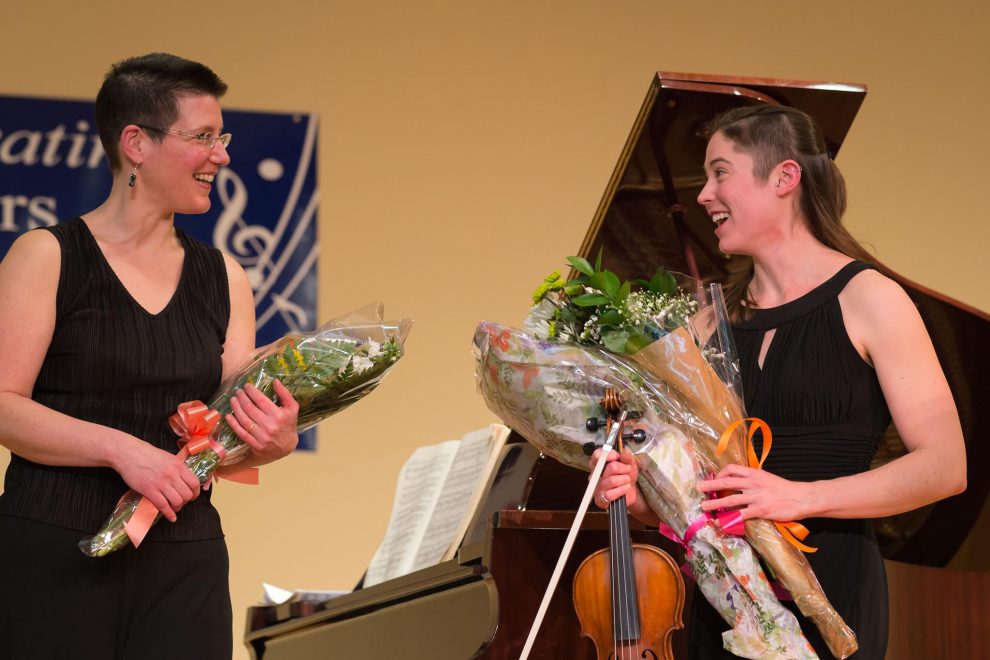 On Sunday April 9 at 2pm, cellist Natasha Farny and pianist Eliran Avni will celebrate the welcome return of spring in a free recital that they are calling “Tribute to Spring: Fantasy, Lyricism, and Romantic Diversion” at Holy Trinity Lutheran Church, 1080 Main, located across the street from the Anchor Bar.

In the spirit of Spring, the Fredonia School of Music faculty colleagues are presenting a program of Romantic music interwoven with themes of fantasy, young love, and bird song. In addition to traditional cello and piano music by Johannes Brahms and Frederic Chopin, the duo will also present a richly romantic and exuberant early work by Paul Hindemith. “Hindemith wrote the now rarely performed Fantasy, Op. 8, No. 2 while in his twenties”, says Natasha, “before he began to embrace more dissonant terrain. The Fantasy takes its style from the music of Richard Strauss and Robert Schumann, two great Romantic forebears from Hindemith’s native Germany. Continuing to trace ideas through the German Romantic lineage, we will present transcribed music by Schumann, including the beloved Violin Sonata in A minor, op. 105, and three selections transcribed for cello and piano from the song cycle Frauenliebe uLeben. Schumann’s song cycle tells a story of young love, very fitting for spring, the season of new life and hope, from the point of view of a woman. Although this cycle is usually sung by a mezzo soprano, the music serves the cello’s lower register quite well, perhaps partly because of the instrument’s naturally mellifluous voice-like tone”.

Best known now as a composer, Schumann was also an influential music critic. He was the first to recognize and generously praise, the early works of Johannes Brahms, who will be represented on the program by his Sonata in E minor, op. 38. The program will begin with a serenade on love which features the sound of morning birdsong by the earliest Romantic composer on the program, Franz Schubert. His song “Staendchen” is sometimes better known by the first lines of its Shakespearean text, ‘Hark, Hark, the Lark’. The recital will conclude with a performance of the Introduction and Polonaise Brillante, Op. 3 by Polish composer Frédéric Chopin, who many might think of as the quintessential Romantic composer.

The free concert will be repeated on Tuesday April 11at 8pm, at Rosch Recital Hall, on the SUNY Fredonia Campus.

On Tuesday April 11 at 7:30pm, BPO violinist Megan Prokes will be joined by Eastman School of Music and UB Department of Music pianist Alison d’Amato in the Montane Cultural Center, located on Main Street on the Canisius College Campus for an appearance on the Informally Formal Chamber Recital Series.  “I first met Alison” says Megan, “when she performed in a collaborative project with the Buffalo Chamber Players (BCP) several years ago, and I found her to be an absolutely fabulous pianist”. Pretty much anyone who has had the pleasure of hearing Alison d’Amato perform at the keyboard over the last decade or so, either as a soloist, or as one of the of the finest accompanists in the area, would have to agree with Megan.

Violinist Megan Prokes, currently in her fifth season as a member of the first violin section of the Buffalo Philharmonic Orchestra began studying the violin at the age of four. Her first 14 years of instruction were completed at Buffalo Suzuki Strings, where she was a student of Alice Keith Knowles and Mary Cay Neal. As a member of the advanced ensemble at Buffalo Suzuki Strings, she participated in concert tours to the southeast United States, Chile, Peru, England, and Ireland. Megan continued her studies at Carnegie Mellon University, where she earned her BA and her MFA degrees in violin performance as a student of Cyrus Forough. Megan has appeared as a soloist with the BPO and the Ars Nova Chamber Orchestra, and she has been a member of the Richmond Symphony Orchestra and the Virginia Symphony Orchestra. An active chamber musician, Megan performs regularly with the BCP and has participated in the Roycroft Chamber Music Festival for the past three years. She spends her summers at the Breckenridge Music Festival and the Lake George Music Festival.

Francesco Maria Veracini (1690-1768) was an Italian virtuoso violinist and composer who’s formally shining star until recently has been obscured by his more famous compatriots, such as Corelli, Tartini and above all Vivaldi, so it is good to see that Veracini’s Sonata in e minor will open the program.  Megan will also perform the Berceuse, Op. 20, by another great violinist, the early 20th century Belgian virtuoso, Eugène Ysaÿe, as well as the heart-melting Romance in f minor, Op. 11, by Czech composer Antonin Dvorak. An advocate of the best, most accessible contemporary classical music, Megan has programmed the Morning Porch (MacDowell) movement from the Buffalo-based composer Caroline Mallonée’s comprehensive collection of works known as String Tunes, a work that has recently become something of a signature piece for her. Megan’s recital will conclude her recital with one of the core pieces of any violinist’s repertoire, Johannes Brahms’ Sonata No. 3 in d minor, Op. 108.

Tickets: $15/ $7 students at the door or online at www.canisius.edu/artscanisius