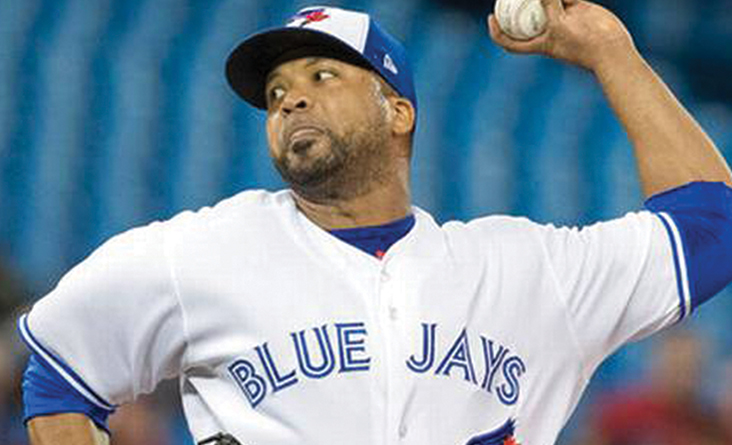 For a team that made it to the American League Championship Series last season and had real title hopes, this was the year that the Toronto Blue Jays were supposed to take that next step for a return to the World Series after a 24 year absence.

It’s less than a month into the season, but already fans and pundits are comparing their league worst won-loss record to those teams that had similar poor starts, and a quick consensus is emerging that the team is already doomed from any chance of returning to the playoffs for a third straight season.

Right now few fans up in Toronto are paying attention. Their Maple Leafs have been electrifying to watch, and no matter what the outcome of their NHL first round playoff series, for their long suffering fand it is already a year to remember. The Toronto Raptors are in the NBA playoffs, and playing before packed houses and thousands more spilling into the streets outside the Air Canada Centre.

But some of the offseason moves made by Blue Jays front office executives Mark Shapiro and Ross Atkins are already being second guessed. The big one, of course, was losing Edwin Encarnacion to free agency. But since the season has started, the team has lost two huge bats – second baseman Josh Donaldson is out two to four weeks with a calf injury, and just this past weekend shortstop Troy Tulowitzki was put on the ten day disabled list with a hamstring strain.

All this has resulted in the team placing 25th in batting average (.220), 28th in runs scored, all while sitting at the bottom of the standings in earned run average and home runs allowed. No offense. Poor pitching. Shoddy defense. And that has the Blue Jays sitting dead last in Major League Baseball.

Only two teams in the last 70 years have made it to the playoffs after starting with a 4-13 record. The 2001 Oakland Athletics went on an amazing tear, finishing that year 102-60. In 1951 the New York Giants went 98-59 to win their division pennant.

Mind you, the threshold was higher then because there were no wild card berths available then. Nonetheless, the Jays would have to put together some impressive winning streaks to climb out of their hole. 95 wins is a good threshold to get into the postseason, meaning the team has to start playing like a 100 win team. Right now.

There are train wrecks in the day to day lineup right now. The well traveled Jarrod Saltalamacchia, playing for his seventh major league team in his eleven year career, is a dreadful .056 at the plate.  More alarming, however, is the play of all star slugger Jose Bautista, who has appeared in every game but is just batting .123 with only one home run and 4 RBI. Bautista signed a one year contract extension in January for massive dollars, following the departure of Encarnacion to Cleveland, yet many questioned the move by the Jays after seeing Bautista’s play tail off in 2016. At 36 years old, age may be the main factor slowing Bautista down, although he had a superb spring training as well as his performance at this year’s World Baseball Classic.

The Blue Jays are the fifth oldest team in the majors right now, and loaded with free agents. That puts the spotlight on the Buffalo Bisons roster as well as the AA roster in New Hampshire.

Already called up to Toronto has been Bisons 3rd baseman Chris Coghlan, who is seeing day to day action with the Blue Jays while Donaldson is on the mend. Starting pitcher Casey Lawrence, who had been scheduled to pitch for the Bisons on Opening Day, has had two call ups these past three weeks. The parent club has summoned several relief pitchers to bolster their sagging bullpen.

All this hasn’t affected the Bisons, who are leading the league as the team headed for their first extended road trip this past Monday after playing most of their schedule in the friendly confines of Coca Cola Field.

With Toronto’s on field problems, one might wonder if it’s just a matter of time before they shake things up at the big league level, leading to call ups and demotions between the two teams. Manager Bobby Meacham says that won’t be the case.  “Oh gosh no. I have enough to figure out here in Buffalo so I’ll let them handle that. We just have to keep playing well and playing hard and hopefully that will be able to help them.”

Looking long term, Toronto’s problems should eventually mean investment in scouting, drafting, and priming their farm system to develop prospects into big leaguers. That should augur well for the Bisons, and for the Blue Jays. That organization has never had much on field success and championships at the minor league level. But with the parent club aging and swooning in the MLB standings, all that might change, and sooner, rather than later.