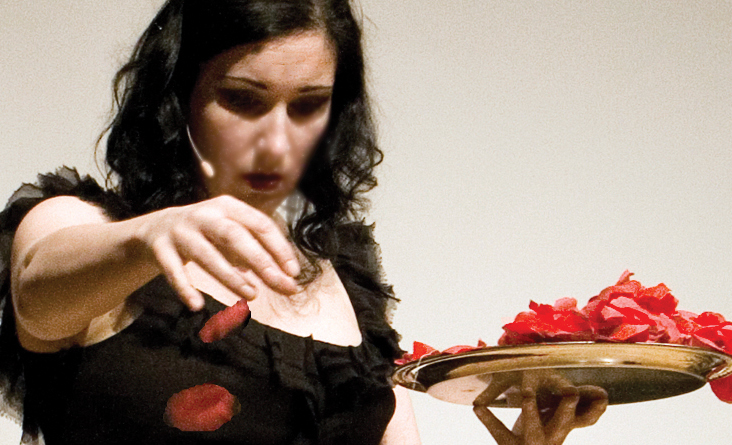 On Friday May 12 at 8pm, in the Burchfield Penny Art Center on the Buffalo State Campus. soprano Tiffany Du Mouchelle will be featured in Roger Reynolds’ Justice Songs, a harrowing adaptation of ‘Agamemnon’, Aeschylus’s ancient Greek tragedy considered to be the ‘urtext’, or ‘original text’ of Western Civilization’s dramatic tradition. Tiffany will be joined for the performance by Stephen Solook, percussion, and Paul Humbree, computer musician, for a program which also includes works by Maurice Ravel, Alexander Scriabin and the contemporary Argentine composer Alejandro Viñao.

Imagine, for a moment, that you are a wife and a mother, married to Agamemnon, the most powerful king in the Heroic Age of ancient Greece. The Greek fleet is becalmed at Aulis, unable to depart for Troy. Agamemnon consults a seer who tells him that he must appease the anger of the goddess Artemis by sacrificing his only daughter Iphigenia if he wants the winds to be released. Unable to prevent him, his wife Clytemnestra, warns him that there will be dire consequences if he sacrifices their daughter, but he has her sacrificed anyway and the fleet sails to Troy. Fast forward ten years later and Agamemnon, the triumphant conqueror of Troy, returns home only to meet his fate – death at the hands of his wife Clytemnestra.

Aeschylus wrote his play Agamemnon more than 2400 years ago, and the powerful tragedy still resonates strongly, both with modern audiences and contemporary creative artists. Inspired by ‘Agamemnon’, the Pulitzer prize-winning American composer Roger Reynolds has worked on what he calls his Red Act Project for almost twenty years. Commissioned by the Library of Congress, where the work received its premiere, Reynolds created Justice, his chamber opera based on Agamemnon in 1999-2001.

“Perhaps the most powerful impression any narrative text has ever left on me”, writes the composer Roger Reynolds “is that inscribed by Aeschylus in Agamemnon, the first play of the Oresteia trilogy. Again, there is an intersection of intellectual implication, moving narrative, associations through imagery and oppositions that is magnetic. Nevertheless, it is the flow of the language itself as rendered into English by Richmond Lattimore that cemented my resolve to embark upon the Red Act Project. I was engaged with it for more than a decade”. Roger Reynolds, professor of composition at the University of California at San Diego since 1969, has been a senior faculty member of UB’s nationally acclaimed June in Buffalo Festival on numerous occasions.

“In the original conception of this work”, says Du Mouchelle, “Clytemnestra was conceived as a tripartite being, performed by actress, soprano, and percussionist. The actress lines most directly articulated and closely related to speech, the soprano a lyrical extension of those lines, and the percussionist further amplifying and articulating the thoughts, words and actions of the actress and soprano. Here, in Justice Arias, the actress and soprano roles are fused together, but the compositional divisions are still present in the various forms of articulation”.

Alejandro Viñao composed Hildegard’s Dream, his 1994 work for soprano and computer using Latin texts by Hildegard von Bingen. As the composer explains, “Hildegard von Bingen, the legendary visionary, composer, poet and religious figure of the Middle Ages was continually plagued by illness throughout most of her life. In 1141, these afflictions receded and gave way to a series of religious visions. When I was composing ‘Hildegard’s Dream’ I imagined that amidst these visions, Hildegard had a dream, too awesome, too frightening, too beautiful to be recorded or even to be acknowledged to anybody, perhaps not even to herself. It was a musical dream: the armies of the Islam are overrunning Europe. Hildegard is attending a performance of one of her vocal compositions which the Lord had ‘revealed’ to her in one of her visions. The piece is being sung by 80 nuns of her own convent. The dream would be an intolerable nightmare if the music were not so overwhelmingly beautiful. Hildegard is suddenly woken up by her own singing”.

Fredonia School of Music violinist David Colwell, and Ithaca College School of Music pianist Dmitri Novgorodsky have been one of the most talented violin and piano duos on the local performance scene for the last few years, and they will make a welcome return to this series with their performance of Ravel’s pyrotechnically brilliant Tzigane.

The young Hungarian violinist Jelly d’Aranyi, the grand-niece of the great violinist Joseph Joachim, and a frequent recital partner of Béla Bartók, who dedicated his two sonatas for violin and piano to her, commissioned Ravel to write Tzigane. Soon after the successful premiere of the work in London in April 1924, Ravel orchestrated the piano part, and Tzigane is one of those rare works that remain equally popular, in both their orchestral and chamber versions. While the title might be best translated as ‘Gypsy’ the one movement work contains no authentic Gypsy melodies, but demonstrates a kind of popular musical exoticism through its virtuosic violin showmanship reminiscent of 19th century virtuoso composers like Pablo de Sarasate and Niccolò Paganini.

Novgorodsky will also perform Scriabin’s Sonata No. 2, Op. 19. According to Scriabin’s biographer, “No one was more famous during their lifetime, and few were more quickly ignored after death”. Influenced by Chopin initially, then later by theosophy and his personal brand of mysticism, he developed a more dissonant style. He worked on his Sonata No. 2, also known as the Sonata-Fantasy for five years before it was published in 1898. One of Scriabin’s most popular works, the two movement, technically demanding piece applies a touch of impressionism to its Chopin influenced romanticism.

The Opera Impresario of Buffalo
One Soprano, “Three voices”