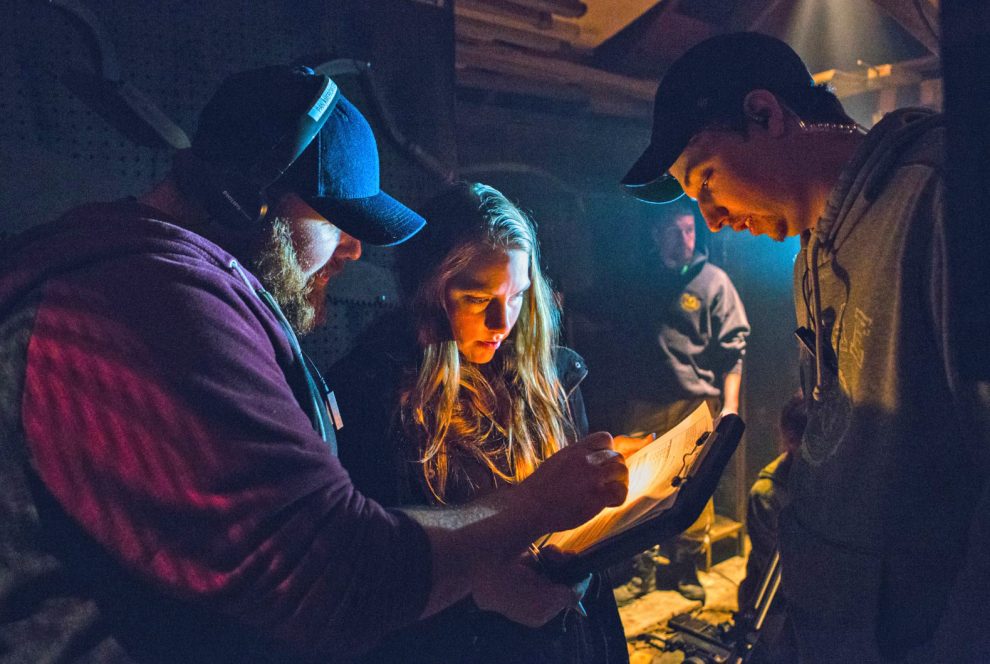 Despite only having one feature to his name, Mecca has created a name for himself helping around in the local film community. Wherever he can, he tries to put his fingerprints on almost every production going in the Queen City.

Thus far, he has aided on local productions such as the recent Gregory Lamberson effort, Johnny Gruesome, and 2015’s Two for One to the big-budget Marshall (with Chadwick Boseman and Josh Gad) and Teenage Mutant Ninja Turtles: Out of the Shadows. Kyle wouldn’t want it any other way.

His 8-year-old self would probably high-five his current self, since this is the life Mecca wanted to live since he was a little boy.

Mecca grew up in Buffalo’s suburb of Kenmore. His mother brought him up on a steady diet of Alfred Hitchcock and other black-and-white suspense thrillers. It is those films that Mecca claims had the most influence on his career. When he was 10, his father won a camcorder at a work function one night. A young Kyle Mecca gravitated toward the camera and soon began making his own mini-movies with friends. He did this for the next eight years.

His entire family had been very supportive his filmmaking, but the pivotal moment of Kyle’s life came just before he graduated high school.

“You always have that moment where you struggle with whether you pursue something you know will get you a job or do you study something you love and hope for the best,” said Mecca, “I struggled with that a bit, but then I just thought I had to go for it.”

Kyle entered Buffalo State Collegr, spending his first year studying Media Arts, but his decision to just go for it was about to turn into a kismet decision. Buffalo State decided to open their new Television and Film Program. It wasn’t open to everyone, though.  You had to apply to get in. Kyle submitted one of his screenplays for acceptance.  Luckily, it was accepted.

Kyle worked through the program until he was presented with his first big challenge: a 10-minute senior thesis.

The film he ended up creating was the film that gave him his first leap into recognition. Filmed in 2012, Tail was shortly entered in the SUNYWide Film Festival, taking home Best Narrative Short.

From there on, Mecca collaborated with friends and other filmmaking professionals, eventually helping to expand the fledgling-yet-quite-locally-successful ND Studios.  ND is a collaborative film production company based in Buffalo. Here, Mecca serves as screenwriter on various pictures as well as assistant director. Some of his credits working with ND include sci-fi short, Locke, directed by friend and local filmmaker, Joe Boldgett, and Buffalo International Film Festival entry, Trew Calling, which Kyle aided in screenwriting.

“I met this group of people and we just became this Buffalo filmmaking family,” said Mecca, “it was great because those collaborations helped me in creating my first feature.”

This feature became Dwelling, Mecca’s first and only feature length film that has already made a buzz around the Western New York community.  The film centers around a young family who moves into a new house and encounters a mirror that has been painted over in black paint. After removing the paint, the family begins experiencing paranormal terrors.

The film is a showcase of how Kyle has been influenced by the people around him: the story was inspired by one of his grandfathers many imaginary stories (in turn inspired by a story written by Alfred Hitchcock) and was brought to fruition with the help of fellow ND Studios participant, Brandyn T. Williams, who also serves as Mecca’s main producer for BeWILDered Media Productions.  The result was a 91-page script and a two-year endeavor.

“We went out to LA for casting, got some locals, too and we ended up shooting in and around Buffalo quite a bit.,” said Mecca, “It was definitely Hitchcock-influenced, but it was just a story that I wanted to tell”

That desire to tell a story has guided Kyle Mecca since he first submitted Syndicate at Buffalo State.

Dwelling ended up as the special screener at last year’s Buffalo International Film Festival and, in the surprise of his lifetime, will see distribution by SONY Pictures Home Entertainment when it hits Walmarts and Best Buys around the country on July 4.

“It was pure luck that happened, actually,” said Mecca, “yeah, we sent in screeners and tried the festival circuit, but this was really lucky.”

Mecca said that the experience of making Dwelling and the result of SONY picking it up for distribution has been the greatest accomplishment of his career.

Since Dwelling’s screening, Mecca has been behind the scenes of various movies, including the big-budget features Marshall and the second Teenage Mutant Ninja Turtles film that was filmed in Buffalo.

Although he finds work whenever he can, do not expect Mecca to be making big-budget special-effects-driven features anytime soon.  What Mecca respects the most about filmmaking is the storytelling aspect of it.  He sees it mostly in his favorite and most influential directors, including Christopher Nolan and James Wan.

“It all comes down to storytelling and that is what those guys do best,” said Mecca, “special effects aren’t even really needed.”

Mecca’s taste in film, though, does not reflect the types of films he wants to make. His favorite movie of all time is Back to the Future and others he highlights are the Nolan pictures Memento and The Dark Knight, classics such as Roman Polanski’s Chinatown and Spielberg’s Jaws, and the Hitchcock films Strangers on a Train and The Birds.

In terms of what the next move is for Mecca, he plans to stay around Buffalo, the city he loves and his forever home.

“I don’t have to move to LA or New York City,” said Mecca, “I love it here, I love the supportive community, and I’m excited to see Buffalo flourish under our city film commissioner.”

Down the line, there’s no sign that Kyle Mecca won’t remain a loyal, humble filmmaker who just enjoys scaring the pants off of audiences with Hitchcock-infused suspense. Even so, he always wants to be known as a regular-joe with a Stanley Kubrick approach to filmmaking.

“I just wanted to be known as the small, everyday type from Buffalo, New York,” said Mecca, I want people to say ‘Not only is he a successful filmmaker, he is doing it his way, with his vision. He is creating what he always set out to do.’”

NEWS OF THE WEIRD
THE STRUTS – Thursday, May 18