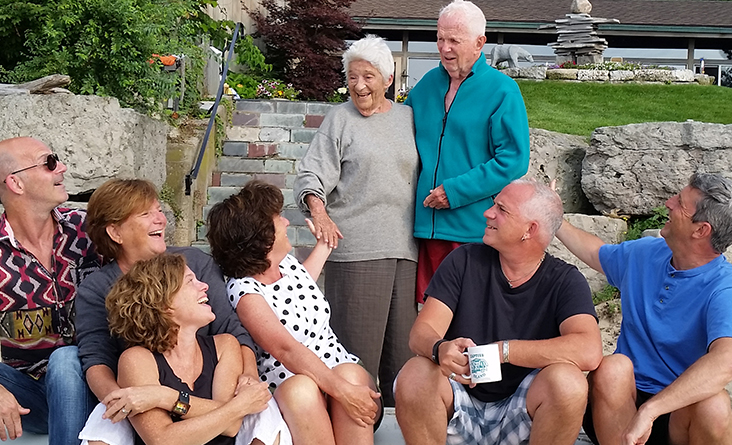 Sometime in the summer of 2000 or 2001, school board member and former Sabres owner Larry Quinn invited me to take a drive with him up to Bay Beach, Ontario.  He wanted me to meet his good friends, Joan and Peter Andrews.

“I think you have a lot in common,” he said.

So up I went with Larry to meet “the Andrews” at their beach house overlooking Lake Erie. It was to be a fateful afternoon. Joan and Peter would become two of the best and certainly most vivid friends of my life.

Joan and Peter made a dynamic and colorful couple.  They had unlimited interests, which they pursued with unbridled energy, supporting such local institutions as the zoo, Temple Beth Zion, and the Buffalo Seminary. They effectively founded the Burchfield Penney Art Center by donating the first Burchfield painting, “December Storm”; Charles Burchfield had been a personal friend.

And oh yes, they shared my passion for the theater.

When Joan died on May 15th at the age of 86, the loss left a large void in my world. Few people could talk about the theater with as much knowledge, insight, and passion as she could.

I never met Robert Brustein in my life. Joan knew him well. She got him to sign the book for me.

The Andrews Theatre, home of the Irish Classical Theatre Company is named after them.  She served on the Studio Arena Board, which she and Peter helped establish as a resident regional theater. In fact, Joan and Peter named Studio Arena, wanting the theater to echo the name of Washington’s Arena Stage, where they had also exerted enormous influence.  They were connected to the Kennedy Center Theater, Washington’s Wooly Mammoth Theatre, Shakespeare Theatre Company, and Theatre J.

Ruben Santiago-Hudson, a native of Lackawanna and a noted playwright, director, and Tony Award winning actor, attended her funeral and spoke at the luncheon afterwards.

There are couples who finish each other’s sentences.  Joan and Peter were not that sort.  They interrupted each other constantly as the conversation careened from one topic to the next, and often sparks would fly – quickly and briefly, for they were also entirely devoted to each other.

Peter likes to tell the story of when he proposed to Joan.  They were both working at the Courier Express newspaper, which Peter’s uncle owned.  The two had recently had an argument.  They were walking around the lake in Delaware Park behind the Albright-Knox Art Gallery.

Peter pulled out a diamond ring and asked Joan to marry him.

Joan refused him, immediately and summarily.

Peter shrugged, said, “O.K.” and hurled the ring into the lake.

Aghast, Joan protested, “Have you gone crazy? What have you done?”

“Ohhhhh!” said Peter, pulling the real ring from his pocket. “So you do want to marry me after all?”

He had thrown a fake into the water.  The two were married for 61 years.

Peter had anticipated that Joan could be impetuous and stubborn.  He loved that about her.

In recent years, Peter confided in Larry Quinn that he knew he had married a woman who was a force to be reckoned with.  Anyone who knew Joan, knew that.  But over the years, Peter said, his love for Joan had been renewed over and over again.  He particularly recalled one night in 1965 when he was working in Washington and a fire broke out in the house in Buffalo.  Joan woke up, and through her decisive action, she saved the lives of the entire household.  In Peter’s mind, Joan was a hero who had saved their children, and he couldn’t imagine his life without her.

In time, Peter’s job at the Courier took the family to Washington permanently. They lived in the Georgetown area of Washington, D.C. in a house once owned by actress Myrna Loy – Joan bought the house while Peter was away, without consulting with him.  She would live there, with Peter, for the rest of her life.

Still, Joan and Peter were native Buffalonians with a single-minded love of this city. Peter was a “Conners,” a family that included William J. “Fingy” Conners, tycoon of the Erie Canal harbor whose influence included ownership of the Courier Express newspaper. Joan’s father was an executive with the Kleinhans men’s clothing retailer. The couple met working at the Courier, after Joan graduated from Vassar College, and married in 1955.  They made sure that their children felt a powerful connection to Buffalo as well.

Joan had a profound sense of social justice.  She was on the founding board of Buffalo’s Planned Parenthood.  She gravitated to theater projects that highlighted social issues.  She and Peter once brought their friend Theodore Bikel to Buffalo to perform “Disputations,” a play about the historic debates between Christian and Jewish theologians during the Middle Ages – the event took place on the campus of Catholic Canisius College.

In recent years, Larry Quinn confided that part of the reason he had actually introduced me to Joan was that she had started to feel alienated from the arts community that was so dear to her.  I had been enlisted to help reconnect Joan to the Buffalo arts community, and to help her feel appropriately valued.

“She began to feel that she had lost touch with the real artists of buffalo,” said Quinn, “and that she was being treated as if she was nothing more than a checkbook, not the passionate and knowledgeable supporter of the arts that she was. At her funeral, I said that my grandmother used to say that we Irish will fight for something even if we don’t know what it is.  Joan would fight for things, but she knew exactly what she was fighting for! I think that is what attracted her to artists.  An artist is, by definition, a fighter.  An artist will step forward and say things about our society that aren’t popular.  An artist will live life in an unconventional way.  Joan admired that and she was willing to fight for that.”

I recall in 2008 when Joan learned that the high profile Kennedy Center production of August Wilson’s entire “Century Cycle” – readings of all ten of his plays about African American experience, done over ten days — had not given a first rate party, she was appalled.  She immediately arranged a cast party at her Georgetown home and pulled out all the stops.

“In ‘Ma Rainey,’” recalled Joan, “August Wilson says that white people will befriend African American artists, but they won’t invite them over to their houses. That’s just wrong.  This cast deserves a first rate party, and we’re having it at our house!”

Tony Award nominated actor Stephen McKinley Henderson was there.  He remembers the event as a night that would go down in D.C. theater lore.

“Joan threw an incredible party!” says Henderson.  “And everybody was there!”

Through our shared interest in the theater, Joan and I did have a lot in common. All major donors to well-known theaters have an enthusiasm for theater going, but how many can write scholarly and insightful program notes and provide dramaturgy for the use of the director?  Joan could.

From the moment I met her, she was gregarious, opinionated, and fabulous.

Most phone calls to Joan were greeted with a demand to know why you hadn’t called sooner.  Every goodbye was punctuated with Joan extracting a promise for you to call again soon, or better yet, to visit, and an unsubtle request to be told that she was loved.

Joan was loved, and the love she demanded, she returned generously.

I will miss her.