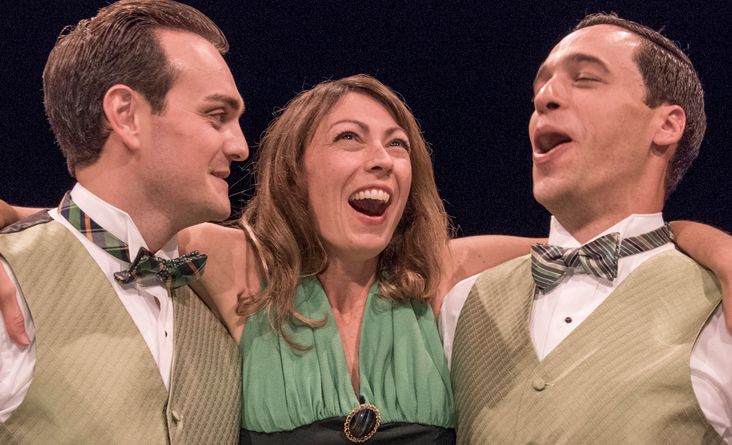 In the opening scene of Noël Coward’s comic masterpiece, Private Lives, when Amanda’s new husband assures her that she is entirely “normal,” she objects, “I think very few people are completely normal really, deep down in their private lives.”

This idea could serve as the theme of Coward’s entire career as a playwright. In the world of his plays, desire is a quality that cannot be contained by traditional monogamy. It is uncontrollable, and for this reason, nobody is completely normal.

Design for Living, currently enjoying a stylish production directed by Katie Mallinson at the Irish Classical Theatre, is a happy reminder of Coward’s genius for playful social critique. In this play, Gilda, played by Kate LoConti, cannot decide between two men who ardently love her. At the same time, these men, Otto, played by Adriano Gatto and Leo, played by Ben Michael Moran, clearly love each other. When jealousy intervenes, their happy ménage a trois seems to be unsustainable. That is until the three manage to devise a happy “design for living.”

The play itself was not much loved during the Coward’s lifetime. Written specifically for Coward to perform alongside his close friends, Alfred Lunt and Lynn Fontanne, Coward would later lament:

“Design for Living has been liked and disliked, hated and admired, but never, I think, sufficiently loved by any but its three leading actors. This, perhaps was only to be expected, as its central theme, from the point of view of the average, must appear to be definitely anti-social. People were certainly interested and entertained and occasionally even moved by it, but it seemed to many of them ‘unpleasant.'”

Coward was, clearly, quite attuned to his play’s social subversiveness. Despite the fact that many themes and events are identical to events in the perennially popular Private Lives, the conclusion of Design for Living has proven to be especially problematic in this regard. Gilda will (spoiler alert) opt to ditch her husband, Ernest, and keep both lovers. In putting their socially stigmatized desires above their social responsibilities, Gilda and Otto and Leo seem to have used and abused poor Ernest rather willfully. Unless you hit the right tone, the play just seems mean.

Less problematic today, but worth noting is the fact that the world of the 1930s was not oblivious to the play’s homosexual undertones, and not entirely tolerant either. In his 1933 appraisal, George Jean Nathan, the foremost American drama critic of the first half of the 20th century is unequivocal, and aims for the jugular.

As to Design for Living … I can see in it little more than a pansy paraphrase of [George Bernard Shaw’s] Candida, theatrically sensationalized with “daring,” gay allusions to hermaphrodites, “gipsy queens,” men dressed as women, etc., and with various due references to “predatory feminine carcasses” and to women as bitches. The big scene is simply a rehash of the one played by the two drunken women in the same author’s Fallen Angels and here given, relevantly, into the hands of two men.

Director Katie Mallinson graciously agreed to attend a performance of her production of Design for Living with me. I was intrigued to hear the observations of a director with her background in dramaturgy, about a play I know well. I have been very impressed with her previous work, notably the marvelous Road Less Traveled production of Dinner With Friends. I had also once seen an excellent production of Design for Living, like this one, done in the round. That was the widely admired and successful 1985 Circle in the Square production, starring Jill Clayburgh, Raul Julia, and Frank Langella. I was interested to see how Mallinson approached the challenge of the circular Andrews Theatre.

At the first intermission, I asked about the physicality of the staging, particularly Kate LoConti’s superior embodiment of Gilda.

Mallinson seemed pleased and said they had worked on this particularly in rehearsal.

LoConti’s performance is notable for its light agility and for the unflinching confidence of her speech. This is established immediately, when, without saying anything, she collects herself to answer the door of her Paris apartment, and subsequently, throws herself full-throttle into a diversionary conversation with Ernest, played by Eric Rawski. This deceptively dense dialogue sets up the thematic landscape of the entire play.

Everything about LoConti’s performance is satisfying. She exudes the requisite charisma, as well as the necessary girlish impudence. While it is never quite fair to compare one actor to another, I will admit that in flashes, she reminded me of young Leslie Caron. Rawski, while miscast again, and too young for paternal old Ernest, gives a game and amiable performance.

Mallinson was decidedly closed-mouthed and protective of certain aspects of the rehearsal process. I was especially intrigued, because the production was handed to her, already cast and with the creative team already in place, after another director was obliged to bow out. We discussed working in the circular stage of the Andrews Theatre, which presents certain challenges, and the director was interested by my recollections of the Circle in the Square production.

Right from the top, I was curious about her choice to make it entirely clear who is in Gilda’s bedroom at the start of the play. I have seen this detail played as a surprise elsewhere. Mallinson’s is a valid choice, but I missed the spirit of mischief and unpredictability, not to mention the dramatic momentum of making the actor’s entrance a revelation. I also noted that there were large sections of the first act in which actors seemed to be wading through pages of Coward’s language. These sections became very challenging for the audience at a three-hour play.

Alfred Lunt who originally played Otto, and Lynn Fontanne, the original Gilda, were, arguably, the most successful acting couple in the history of the theater. They worked almost exclusively together and rehearsed constantly, developing an acting style whereby they would overlap each other’s sentences with astounding precision. This practice must have proved invaluable for a play like Design for Living.

The Irish Classical Theatre production is most successful in the more rapid-fire exchanges. These land very successfully. For that reason, the third act, with its larger population of actors, and shorter exchanges, is particularly strong.

In the same vein, some of the smallest characters resonate quite vividly under Mallinson’s direction. Jennifer Fitzery is sublime as Gilda’s morally inflexible housekeeper Miss Hodge, endowing the woman with the perfect blend of flint and bluster. Even her walk is funny.

Late in the play, Lisa Vitrano makes a distinct and memorable person of Manhattan socialite Grace Torrence, a woman with billion bucks in the bank, but a bohemian sense of adventure. In the same scene, Conor Graham and Anna Krempholtz are acerbically funny as incompatible Henry and Helen Carver.

Mallinson conceded that the rehearsal period of four weeks is stressful for its brevity. Such economy of time is also necessary in a town like Buffalo, where audiences almost always number fewer than 200, and a theater cannot recoup enough to pay for longer rehearsal periods, or for preview performances. The burden is upon actors to learn words, to analyze scripts, and to make choices outside of rehearsal.

I admired the work of Adriano Gatto as Otto, and Ben Michael Moran as Leo, but would have been happier with clearer distinction between the two characters. In their favor, they are both dashing young men, and successfully projected the rascally fun of the piece.

The celebrated drunk scene between Leo and Otto comes at the end of the second act. Thinking that Gilda has run out on them forever, the men get drunk together on “Armadildo” sherry and try to comfort each other; they touch and hold each other; they thank God for each other and convince themselves that they are better off without her. Finally, however, they move past this suggestively homoerotic episode and lament that they are going to be horribly lonely without her

I would like to report that these gents nailed the scene, but I flat out could not see what was going on. It was played on a sofa with a decidedly high and opaque back. I was seated behind it. At the intermission, I quipped to Mallinson, “A love seat would have been funnier.” To her credit, she laughed. She did not comment on this design decision, and I did not press.

This was, to be fair, an anomaly, in a production that generally takes care to keep the picture revolving and moving, and which does not favor one side of the audience above another. It is also notable that three hours fly by very quickly and I felt fresh and energized as the play continued.

Beyond the hilarity of Otto and Leo’s surface absurdity, scenes like Otto and Leo’s drunk scene (or like the fights in Private Lives, or like the murder attempts in Blithe Spirit) lie at the heart of Noel Coward’s comedic project.   Whereas his contemporaries thought he was focused on the depraved few, in todays world we are much more comfortable with the idea of universal depravity. Find a spouse who has not felt jealous, or taken advantage of, or ignored, or who has not, deep down in his or her private thoughts, contemplated the murder of a spouse, coveted his neighbor’s wife, or yearned for the company of an ex-husband.

In her production, Mallinson successfully walks this delicate balance. I was particularly impressed by her admirable third act. Gatto and Moran shine especially brightly at this point. In an unscripted gesture, Gilda gently and compassionately pulls the boys back while Ernest is railing against their depravity. This is followed by the delightful, unbridled laughter that famously concludes this most elegantly subversive play.

Back in 1933, condemnation from George Jean Nathan might have seemed reasonable and persuasive. Today, there is something thrilling about finding this titan of 20th century criticism in a moment of critical hysteria. “Pansy paraphrase” is an epithet out of control. Nathan seals his own position in posterity, when he predicts historical oblivion for Noël Coward, who, on the contrary, remains one of the most produced playwrights in the world more than 80 years after the opening of Design for Living.

“Mr. Coward occupies the successful place in our theatre today that the late Clyde Fitch occupied twenty and thirty years ago,” wrote Nathan. “Where will the plays of Mr. Coward be when as many years have passed? As in the case of my critical reflections on Fitch in his fashionable heyday, I leave the answer to the calendar.”

Because the perfect conventional matrimonial norm is, itself, a fiction, Coward’s plays endure, and even achieve a surprising universality. If we could speak across time, we might remind poor Nathan, that many a worthless degenerate has been revivified since 1933, for deep down in our private lives, few of us are truly normal. Beyond the hilarity of Otto and Leo’s surface absurdity, scenes like Otto and Leo’s drunk scene (or like the fights in Private Lives, or like the murder attempts in Blithe Spirit) lie at the heart of Noel Coward’s comedic project. Each of us needs to forge a design for living. Katie Mallinson’s production at the Irish Classical Theatre certainly and very pleasurably delivers this comical and important message.