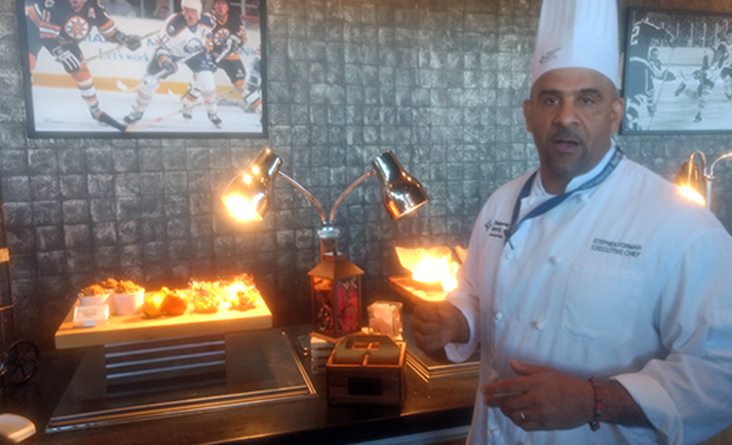 Sabres ramp up the culinary delights at KeyBank Center

Anyone remembering the old days at Memorial Auditorium surely recalls three escalator rides to ferry up to the orange balcony seats way at the top of the building. And right there, steps off that escalator, was a long and narrow concession service stand lining the wall. The choices were popcorn, nachos drenched in cheese, hot dogs, soda pop, and beer. Sportservice was the concessionaire, and the food, to be polite, wasn’t all that great. Classic arena dreck was the appropriate description.

How far the game day food experience has changed.

Today it’s all about food. Ballpark food. Specialty items. Craft beer. Fine wines. Locally sourced products and ingredients. And of course, revenue streams for the host teams looking to greet their patrons hungry and then leave them satiated.

This week, the Buffalo Sabres unveiled their updated concession lineup, in preparation for Thursday’s home opener against the Montreal Canadiens. The team has pulled all stops in presenting an exciting array of menu items, sandwiches, and upscale meal experiences to entice just about any fan at the game.

“Ten, twenty years ago fans came to the game just to watch what was going on down on the ice. Now it’s so many other things, concessions, different beverages, arena entertainment. Now there’s so much in more coming to a game, the apps and social media, all that stuff. And the food being done by Sportservice is all a part of that,” explains Sabres Senior Vice President Mike Gilbert.

Sportservice. That’s the food subsidiary behemoth run by locally headquartered Delaware North Corporation. That company is the concessionaire for literally hundreds of sports venues around the world, and Gilbert readily admits that the Sabres organization gleans ideas and information from peer arenas around the league to see what works and what is popular around the rest of the league. “It’s something we do all the time. Delaware North, they are the experts, they run around the world with their business. But we bounce ideas off them all the time to see what fits our fans needs and wants,” said Gilbert.

Executive Chef Stephen Forman is the guiding hand overseeing the new creations, working with a team of sous chefs and culinary personnel, which translates into a small army. Forman wasted no time in rolling out some of his new creations that fans can expect to see on the concession marquees this season. “Our signature item is ‘The Enforcer’, an Italian sausage served on a Costanzo roll, topped with pulled Buffalo chicken, blue cheese slaw and bbq sauce,” said Forman.

“We feel our customers coming in will enjoy the variety of food we have to offer. We want people to understand it’s more than peanuts, hot dogs and pretzels.”

The new sandwich offerings are plentiful… taking the mainstay Buffalo bologna and onions to a new level is the Bologna Po Boy, served with slaw and Weber’s mustard. There’s Moe’s Hawaiian Burger, grilled pineapple, pickled jalapeno and red pepper, peppered bacon, American cheese and sriracha mayo. “We named it after the creator, Moe, who is one of our club level concessionaires,” said Forman.

And this year, there will be a mac and cheese stand, offering the creamy concoction topped with a variety of choices, including bbq pulled pork or teriyaki meatballs.

Fans on the club level will find a new concession area titled “Our Eats”, featuring food items with a Buffalo flair. On the menu are half a rotisserie chicken marinated in Chiavetta’s sauce, Buffalo chicken wings, pretzels dipped with Genesee craft cheddar beer sauce, and for the sweet tooth, Ru’s apple pierogi with caramel stout drizzle.

Andy Altemore is the food and beverage director at KeyBank Center, and realizes the importance of food diversity and quality as an important component of the game night experience. “The demand of the customer is changing. The more informed they are about food, the more they want to try different things. It’s on their phones, it’s on their TV’s. The fan experience is changing to more than just the game.”

There are unique food items staged in various other cities in their sports facilities. Mention Pittsburgh and the famed Primanti Brothers sandwich comes to mind. In Kansas City, it’s their barbecue. Florida has the Cuban sandwich. In Green Bay and Milwaukee, it’s all about their signature bratwursts and cheese. We already know that Beef on Weck and wings are Buffalo’s gastronomic gifts to the world.

So we asked Altemore, name one item on the KeyBank Center concession menu which the out of town visitor just has to try. “No doubt, it’s ‘The Enforcer’” Altermore replied. “That’s our signature which our chef put out to headline our list of items.”

One tradition popping up on menus elsewhere which Buffalo refused to emulate was that signature monster sandwich. Some creative chef puts together a monster sandwich with eight or so burgers, slathers in five different cheeses, adds crazy ingredients like peanut butter and jelly, piles on the bacon, of course, and then garnished with lettuce and tomato so we don’t feel guilty–a belly buster containing 5000 calories. Add on a $35 price tag and the sports blogs have a field day.

“I’ve seen and heard about the ‘Burgerizza’ in Atlanta, for example,” said Altermore. (For those who don’t know, this is a one pound burger sandwiched in between two cheese and pepperoni personal pan pizzas, available at SunTrust Park in Atlanta). “We don’t have anything like that on our menu. We want items that fans can easily take back to their seats and consume without difficulty.”

So this season raise a glass of craft brew, enjoy The Enforcer, and toast the old days of boiled hot dogs served up on stale buns. If the team on the ice is a good as the food offerings in the concourses and club lounges at KeyBank Center, come this spring we’ll be watching live hockey in May.

P.K. SUBBAN… RAISING THE BAR ON THE ATHLETE PROTEST ISSUE
CELERY SET TO RETIRE FROM RACING By Andrew Kulyk and Peter Farrell