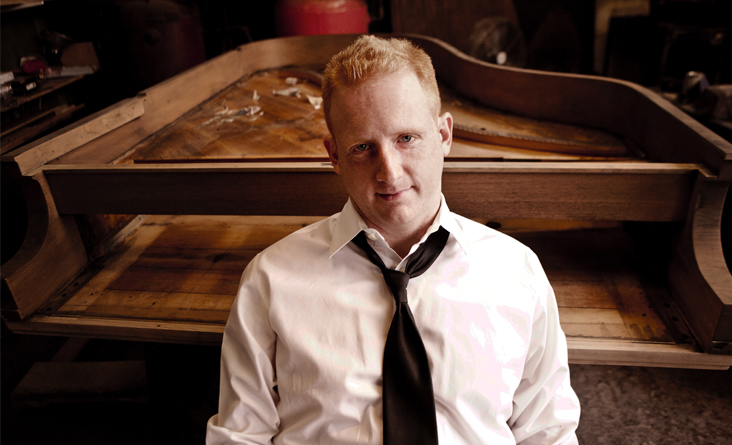 The University at Buffalo has this semester been more than living up to its well-earned reputation as the place to hear some of the heavyweight avantgarde works from the post-World War II era, up to and including the latest contemporary cutting-edge additions to the repertoire. The UB department of music started out its concert season by hosting a hypnotic, two-hour long performance of Morton Feldman’s work for piano solo, Triadic Memories, by the visiting pianist Thomas Moore, who is based at the University of Maryland Baltimore.

This Saturday, October 14 at 7:30pm in Slee Hall on the Amherst Campus, UB’s Center for 21st Century Music will present another lengthy work for piano, but one written for two pianos in this case, by the late German avant-garde composer Karlheinz Stockhausen. His evening length work, Mantra, for two pianos and electronics will be performed by New York Philharmonic Orchestra staff pianist and UB associate professor, Eric Huebner, and Steven Beck, a renowned New York City based contemporary music specialist. The two have collaborated frequently since their student days at Juilliard and have performed together with the New York Philharmonic and in numerous New York City based new music ensembles.

“Stockhausen’s Mantra is a piece I’ve wanted to perform since I was a high school student” says Eric Huebner, “and I’m very grateful to finally be able to perform it in Buffalo. The music is a world unto itself. Everything you traditionally want in music –  hummable melodies, poignant harmonies, rhythmic intensity, calm repose- is in Mantra but it’s all strange and different, partially as a result of the use of electronics. The two pianists manipulate digital ring modulators which brings a psychedelic quality to the piano sound. We also occasionally play wood blocks and crotales, which are small bells. Stockhausen came to believe that he’d been born on a planet orbiting the star Sirius, and that he was put on earth to write a “cosmic music”.  He believed that his was a ‘universal music’, that the main currents in contemporary art music began and ended with him. While this was obviously overblown, it’s difficult to argue that within the world of Mantra he is the master of his domain. Steve and I have very much enjoyed working on the piece and are looking forward to Saturday’s performance!”

“Although the score of Mantra is tightly conceived compositionally”, writes program annotator Katherine Chi, “the leap from conception to performance is enormously difficult, making performances of this approximately seventy to eighty-minute piece rare. Stockhausen demands that the performers embrace a wider definition of virtuosity, and its execution requires a complex setup that is beyond the basic knowledge of a traditional classical pianist. Besides performing a piece that is physically demanding at the keyboard, the pianists must also learn how to use electronic and percussion instruments, and to respond to a new spatial environment. Mantra, as the title page of the music score clearly states, was written not for two pianos, but rather for two pianists. The title suggests the idea that the physical presence and the physicality of the pianists are of great importance; hence the ‘musical-theatre’ of the pianists comes to the forefront. The pianists are required to utilize a space beyond the confines of the keyboard. They need to incorporate mallet work on the crotales and woodblocks into their keyboard work and constantly be adjusting the frequency of ring modulation throughout the piece. In one particular section Stockhausen’s fascination with Japanese Noh Theater is integrated into the piece requiring the pianists to use their voice and to act. Another important component that is weaved into the texture is Morse code that is simulated electronically and also by the pianists on the keyboard.”