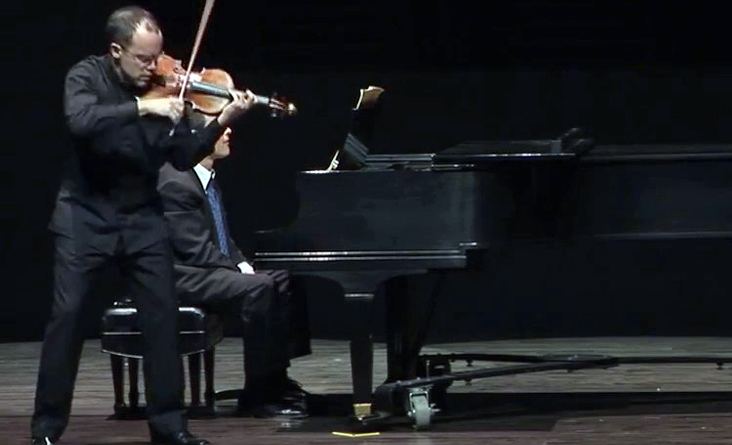 The Friends of Vienna offer an area premiere

The Friends of Vienna will welcome violinist David Colwell and pianist Dmitri Novgorodsky for the first time to their concert series on Sunday, October 29 at 3:30pm in the Unity Church, 1243 Delaware Avenue in Buffalo. Colwell and will offer a pair of favorite sonatas by Beethoven and Grieg, and the area premiere of the Much Ado About Nothing Suite by Erich Wolfgang Korngold.

Until recently, Korngold was best known in America for the wonderful symphonic film scores that he composed in the 1930’s and 1940’s in Hollywood. He first came to the United States in 1934 at the request of Max Reinhardt to arrange Mendelssohn’s incidental music for Reinhardt’s film version of A Midsummer Night’s Dream. He composed his first original film score in 1935 for Captain Blood, and after winning an Academy Award for his score for the movie Anthony Adverse in 1936, he went on to write scores for The Prince and the Pauper (1937), Juarez (1939), The Sea Hawk (1940), The Sea Wolf (1941), Kings Row (1941) and Deception (1946).

Korngold, who was a genuine child prodigy, composed his first original works at the age of eight. When his father Julius Korngold, the most influential music critic in Vienna, took him a year later to meet and play for Gustav Mahler, the composer proclaimed him a genius. Korngold’s two-act ballet/pantomime Der Schneemann was premiered in 1910 by imperial decree at the Vienna Hofoper on Emperor Franz Josef’s name-day, when he was thirteen, and later that year his Piano Trio, Op. 1 was premiered in Munich and New York. In 1916 at the age of nineteen, his two one-act operas, Der Ring des Polykrates and Violanta were instant successes under the baton of Bruno Walter in Munich.

Korngold composed the incidental music for a production of Shakespeare’s play Much Ado About Nothing in 1920, the same year that saw the double world-premiere in Hamburg and Cologne of Korngold’s operatic triumph, Die tote Stadt (The Dead City). The Vienna Burgtheater production of Much Ado About Nothing was a smash hit, helped in no small measure by Korngold’s score, which prefigured his later film scores, with its imaginative use of harmonic lushness and tone color offering immediately recognizable melodic characterizations. When the play run was extended, with many of the original orchestra members no longer available to perform, Korngold adapted the orchestral music for violin and piano, and ended up playing the piano part himself. He later extracted the four-movement suite for violin and piano, which is on this program, from the updated version of his original score.

Beethoven composed his Violin Sonata No. 8 in G major, Op. 30, No.3 in 1802, dedicating it to Tsar Alexander I of Russia. The Opus 30 set of violin sonatas show a great advance in the musical style and in the writing for the violin over his earlier works in the genre. The principal theme is shared between the instruments in each movement of the three works, with the Sonata No.8 being the most light-hearted and graceful in the set. While the potential of the violin and its technical capabilities has advanced, most amateur musicians of the period would have still been able to play these works, an important consideration for the publisher of the collection.

Edvard Grieg’s Sonata for Violin and Piano No. 3 in C minor, Op. 45, once very popular piece, for reasons unknown rarely finds a place in contemporary recitals. Grieg composed his third and final violin sonata in the autumn of 1886, and it was his personal favorite. Norwegian folk melodies and rhythms are used in this sonata, but not to the extent that the composer employed them in his second sonata. Grieg himself played the piano part at the work’s premiere in Leipzig accompanying the Russian violin virtuoso Adolph Brodsky.

A native of Alberta, Canada, David Colwell completed his undergraduate education at the University of Alberta under Martin Riseley. As a full scholarship student at Yale School of Music, he entered the studio of Peter Oundjian and Ani Kavafian. He holds the Master of Music, Master of Musical Arts and Doctor of Musical Arts degrees from Yale. As a winner of a Johann Strauss Foundation Scholarship in both 1998 and 1999, David was afforded the opportunity to study at the Internationale Sommerakademie Mozarteum in Salzburg, Austria with, among others, the Russian violinist Igor Oistrakh. He became a member of the performance faculty at the University of Virginia in 2006, before being appointed assistant professor of violin at the Fredonia School of Music in 2011.

Dmitri Novgorodsky was born to a musical family in Odessa, Ukraine. By the age of 16, he had won the First Prize at the Kazakhstan National Piano Competition, and later the Gold Medal of the National Festival of the Arts. After graduating from the studio of Professor Victor Merzhanov at Moscow Tchaikovsky Conservatory with high honors, Novgorodsky immigrated to Israel in 1991. In 1992, he was offered a full scholarship for advanced studies at Yale University School of Music in the United States, where under the tutelage of Boris Berman, he earned the Master of Music, the Master of Musical Arts, and the Doctor of Musical Arts degrees. In 1999, he was granted the “Extraordinary Abilities in the Arts” permanent U.S. residence, “as one of a small percentage of those who have risen to the top in their field of endeavor.” He has been on the piano faculty at the University of Wisconsin, the Lawrence University Conservatory of Music, the Jerusalem Academy of Music, and the Fredonia School of Music, before joining the Ithaca College School of Music as an assistant professor in 2015.