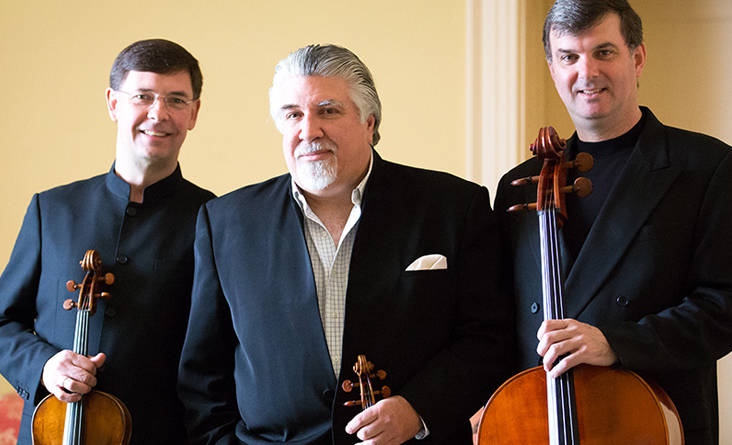 On Tuesday November 14 at 8pm the Buffalo Chamber Music Society will host the debut appearance of the Diaz Trio on its long running series in the Mary Seaton Room of Kleinhans Music Hall. Composed of three internationally acclaimed artists, Andrés Cárdenes, Roberto Diaz and Andrés Diaz, the trio is one of the few professional string trios in existence today, and it performs regularly in recital and at festivals around the world. In 1993 at the invitation of Isaac Stern, the trio performed at Carnegie’s Weill Recital Hall to celebrate the next one hundred years of music-making at Carnegie Hall. Other appearances include performances in Los Angeles, Seattle, Pittsburgh, Boston, Austin, and Lincoln Center in New York, as well as the Mostly Mozart Festival at Kennedy Center, Newport Festival, Cape and Islands Chamber Music Festival, Festival de San Miguel de Allende in Mexico, St. Cyprien International Festival of the Arts on France, the Kuhmo Festival in Finland and an extensive tour of Chile. Their debut tours of Canada, in collaboration with Canadian pianist Angela Cheng and guitarist Norbert Kraft, were a resounding success. For several years, the Diaz Trio was the trio in residence at the Brevard Music Center.

The occasion has an additional special significance for area classical music lovers since violist Roberto Diaz will perform on a 1690 Stradivarius housed at the Library of Congress and owned by the Baird family of Buffalo, New York.

So why are there so few professionally touring string trios? Some of the answers to that question might be found in the October issue of ‘The Strad’, a venerable British-based monthly classical magazine about string instruments and string instrument players that was founded in 1889. The cover article is devoted to the relatively new, Europe-based Trio Zimmermann, and another article in the same issue about the string trio repertoire by Geraint Lewis is tellingly titled “The Cinderella of string genres”.

Franz Joseph Haydn, the Austrian musical giant of the 18th century who created the overwhelmingly successful musical genres of the both the symphony, and the string quartet, also created that of the modern string trio as we know it, but as Lewis is quick to point out, “even if only just”. It turns out that 18 out of 20 of Haydn’s string trios have survived, but 17 of them were “scored, conventionally enough, for two violins and cello”, with only the Trio No.8 in B flat major calling specifically for violin viola and cello. Based on the musical language of these works, is appears that Haydn composed them early on, before he composed his first string quartets around 1755. Thereafter, Haydn, and most subsequent composers who choose to write for a small string ensemble preferred to do so making use of the greater possibilities offered by the four instrumental voices of the string quartet.

Mozart composed the one unquestioned masterpiece for string trio, his forty-five minute, six-movement Divertimento in E Flat Major for String Trio, K.563 in 1788, entering it into his catalog on September 27 of that year. It was probably first performed on April 13, 1789 when Mozart was passing through Dresden, with Mozart himself playing the viola part. He began to write another string trio, but only a 100-bar fragment of that work remains. The Divertimento, which was last performed on this series in February of 1999, will be the feature work on this program.

Beethoven at first avoided composing music for string quartet, perhaps intimidated at least in part by the masterpieces for the genre created by Haydn and Mozart. He did compose several works for string trio which remain part of the standard repertoire, including his String Trio in E-flat major, Op.3, a work which be performed on this almost century-long series for the first time at this concert. As Geraint Lewis aptly observes, Beethoven’s “Trio Op. 3, written between 1794 and 1795, is in E-flat major and cast in six movements: no more explicit homage to the Mozart of K563 could have been possible”.

WNED-FM radio host Peter Hall will host a pre-concert talk with the artists beginning at 7:15pm. There will be special post-concert reception with deserts and wine, welcoming the return visit of the Baird family owned 1690 Stradivarius viola, now housed at the Library of Congress.