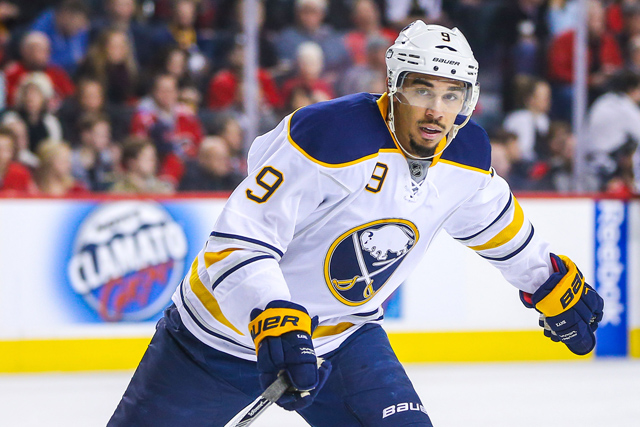 Hottest Sabres player this season likely to be dealt

In an all too familiar script that long-suffering Sabres fans have experienced these past few years, the team is pretty much done for the season as far as any hope for competing for the Stanley Cup playoffs, and we haven’t even entered December yet.

Let’s recap some of the ugly stats, shall we?

The team ranks dead last in goals for this season, with 55 goals. The last two games – at Montreal and then home against Tampa Bay, the Sabres suffered back to back shutouts. The last time they scored was a week ago at home to a tired and dispirited Edmonton Oilers team.

On the power play the team ranks 30th, with only a 12.8% success rate when holding the man advantage.

It doesn’t get much better with goal against, allowing 84 to place them 29th in the 31 team league. Starting goaltender Robin Lehner has a 2.92 goals against average with a .906 save percentage. The numbers are even more bleak for backup Chad Johnson, an eye popping 3.59 GAA and a .886 SV%.

Generational player Jack Eichel is 66th in the league in scoring and his box car contract will kick in next season. Ryan O’Reilly, Jason Pominville, Kyle Okposo and Sam Reinhart, all players earning hefty seven figure contracts, trail Eichel. And Matt Moulson, is pointless this season, and has spent a number of games as a healthy scratch viewing the games from the pressbox.

Number of goals by the defensemen this season. Any of them. ZERO.

There is but one player on the roster right now who would command any trade interest amongst bidders and buyers, and that is forward Evander Kane.

Kane is enjoying his best season as a Sabre, with 12 goals and 11 assists for 23 points. He is on pace right now for 39 goals, which would be the best of his young career.

At the end of this season his contract will finish with the Sabres and he then becomes an unrestricted free agent. This season he is making $6-million. He has kept his cards close to the vest in terms of telegraphing his intentions on a new contact with Buffalo, but based on his performance this year, will certainly command higher dollars in the open market.

Kane’s time in Buffalo has come with some controversy, his legal troubles and his penchant to get himself into bad situations well known around town. He has established few roots here, not buying a home like most other players have done. The speculation amongst the media is he is a top candidate for trade. Canada’s sports network TSN has had him listed as first in their “Top 10” trade bait board for much of the season.

But who could Buffalo get in return?

Just this past week, Canadian commentator Elliotte Friedman speculated that the Los Angeles Kings, Columbus Blue Jackets or Tampa Bay Lightning would make the most likely destinations for Kane. Defensemen Jake Muzzin or Alec Martinez would provide desperately needed help for Buffalo’s beleaguered defensive corps. Would Columbus be willing to part with blueliners Jack Johnson or Seth Jones? Possibly, with their depth in that position.

As for Tampa Bay, imagine the bolster they’d get to their powerhouse offense with Kane in their lineup.

Kane was the centerpiece of a blockbuster trade with the Winnipeg Jets. The five players moved – Tyler Myers, Joel Armia, Drew Stafford, Brendan Lemieux, and a pick that became Jack Roslovic, are all contributing to that team’s success.

For first year general manager Jason Botterill, the Kane dilemma will be his biggest test in his new position. Getting Eichel signed was a test. And a chore. But everyone new it was something that somehow and someway would get done, and good for Botterill for getting it done before this season started.

But either trying to sign Kane now, or letting him go via trade, will have ramifications that will be felt here for years.

-As reported in this corner two weeks ago, The Sabres generous $25 300 level seat promotion on Military Appreciation night must have been such a startling success, that the front office extended the offer on Cyber Monday, for any game starting on December 12.

So Taro checked out two resale sites for the game on the 12th vs Ottawa – Stubhub and Seatgeek to do a price shopping comparison. On Stubhub, upper deck tickets can be had starting at $6.49. Over at Seatgeek, save a few pennies and buy a ticket for $6. The savings can then be applied to that $6.75 slice of La Novas pizza or $9.25 can of Yuengling beer at the Key Bank Center concession stands.

-For the bargain cost of just $100, Bills and Sabres season ticket holders can purchase the experience of skating on the open ice at New Era Field, on the days prior to the World Juniors USA v Canada game held there on Friday, December 29. That experience will come with an upper deck game ticket.