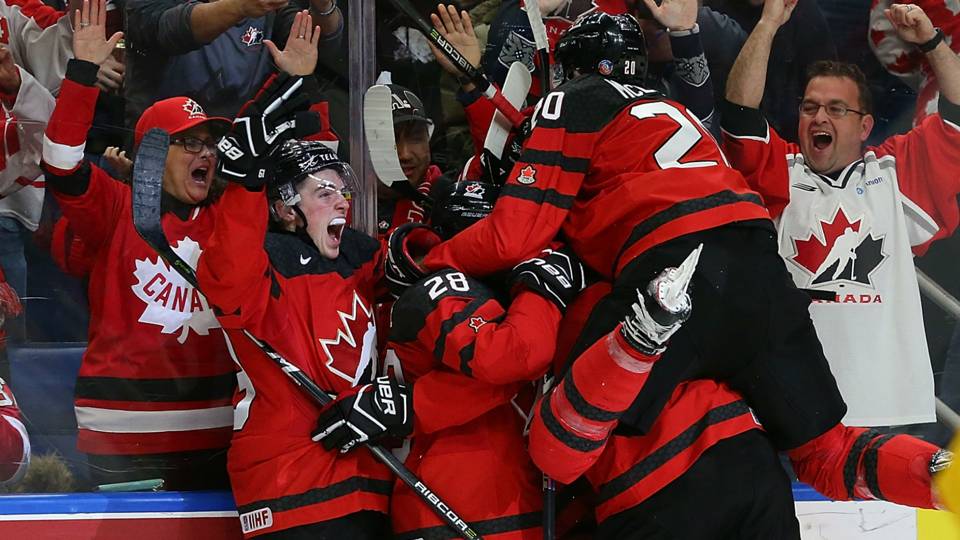 By many metrics, this year’s IIHF World U-20 Championship, better known as the World Juniors, was a rip-roaring success here in Buffalo. At least that’s the spin the organizers put on the tournament which wrapped up last Friday with Canada winning the gold medal before a full-throated packed house at Key Bank Center.

The tournament sold over 200,000 tickets to the 30 games staged at KeyBank Center, HarborCenter, and New Era Field. That’s down over 100,000 from the previous tournament hosted here back in 2010-2011. And those numbers include the highly successful and first-ever outdoor game held at the stadium, which sold over 44,000 tickets, a new outdoor record for a hockey game at the juniors level. “This puts us in the top ten of this tournaments in terms of tickets sold,” said Dave Fischer, Communications Director for USA Hockey and one of the senior members of the organizing committee.

Nonetheless, this World Juniors faced almost a perfect storm of bad timing, bad luck, appallingly poor marketing and pricing strategies, and an oversaturation of this and similar events held in this region the past decade.

To begin with – the weather. Nobody could have predicted that Western New York would be blanketed with bone-chilling arctic temperatures, which started on Christmas weekend just before the December 26 tournament kickoff and lasted throughout the event. Every single day. By last Friday’s gold medal game, Buffalo was in the throes of a Code Blue alert issued by County Executive Mark Poloncarz.

Even with the boxcar pricing, fans and youngsters at home on winter break who might have made the game day decision to attend a game or two most likely stayed home, not venturing into downtown and the fierce winds blasting off the lake.

And those winds? Organizers made an attempt to do something fun. “Championship Village” was set up amongst the flexible lawns and portable toilets of Canalside, complete with a toboggan hill, ice sculptures, and temporary fiberglass huts to provide warming stations and venues for music and beer. A nice concept, but one that landed with a thud, and completely at the fault of the cold weather. The lesson to be learned here is that Canalside will never be a true year-round entertainment destination until actual structures are erected on all those development parcels.

Next. Overkill. In the past eight years, the Buffalo and Southern Ontario region has been the host for four World Juniors championships, two women’s U-17 World Juniors, here and in St. Catharines, and a World Cup of Hockey up in Toronto in 2016. That’s a lot of national jerseys and flag waving, and the ticket-buying public perhaps decided it was time for a break. IIHF president Rene Fasel admitted as much at a free wheeling press conference held last week at the arena. “We tried, but it shows us in the future to be more careful. Here you have such a big country in the United States and Canada. Vancouver already has over 50 percent of the tickets sold. Going back now to the west, the interest of the people is there.” Vancouver and Victoria will be the hosts of the 2019 IIHF World Juniors.

The Canadian dollar. Like it or not, this event is shaped around Canada, their game, their pride and their hockey programs. This is why the event is staged in Canada for almost half of all the tournaments, and why Buffalo makes a perfect destination for ticket buying, day tripping Canadians. In 2010-2011, not only was our dollar weaker but for a time was actually trading at less than the Canadian dollar. Customers then were getting a small premium for their loonies, and that translated into ticket sales, not to mention ringing cash registers at local hotels, restaurants, bars and bistros, and area shopping malls. For eleven days, scarlet wearing Canadians literally took over the streets of downtown Buffalo.

This time around, little such presence. With the greenback costing Canadians roughly $1.27 in their currency, a game day in Buffalo became more of a heavy lift. What might have been a few days visit and multiple games might have turned into one game on a day trip, or no game at all. It showed, with room availability at several downtown hotels and local bars searching for patrons in this slow time of year.

But the biggest detriment, ticket pricing. The IIHF and their marketing partners stand strong with the concept of “packages”, not unlike buying a season ticket or a mini pack to one’s favorite team. And in fact, the Sabres rolled out these packages early last year, offering three separate tiers of commitment, and in almost a threatening and menacing tone, told the ticket-buying public that “the only way to guarantee your seat to the outdoor game is to sign up for one of these packages.”

It was all nonsense. Tickets to the outdoor game were plentiful, and by the time the game got to within two weeks, there was even a Groupon promotion on their Canadian site offering tickets to the game at New Era Field for C$35.

By the time single tickets went on sale, the ticket prices for all pool matches were identical – so a Canada vs Switzerland game sold for the same price as the, say, Denmark vs Slovakia game.

Imagine instead if the IIHF and the Sabres offered any and all tickets not involving the USA or Canada at $10 each or $25 for family packs, instead of at prices starting at $30 and touching three figures. “You get experience only when you make mistakes,” replied Fasel. Sabres executive Mike Gilbert stressed that ticket prices for these games were actually somewhat lower than the last event held here, and also repeated the comments that the success of the tournament was not dictated by ticket sales alone.

At the rambling press conference, run by USA Hockey’s Fischer, things got so bad at one point that Fischer called out and insulted a Toronto based writer before apologizing later. At one point Fasel made a “time out” signal and asked for calm as reporters peppered the officials on the dais with more and more questions about the poor crowds and the horrible optics. Mind you, Fischer, hockey operations executive Jim Johannson, and other USA Hockey officials have built huge and solid relationships with the Pegula run Buffalo Sabres organization over these past few years. They are consummate professionals and do their jobs well. But even they must have been feeling the heat for some of the shortcomings of this event.

As for Vancouver, packages are indeed selling well for a tournament that has not seen that part of the world since 2006. Mind you, once again the ticket prices are in the stratosphere, and the “over 50%” which Fasel cited are up in the cheapest seats of Rogers Place in Vancouver, where tickets in the 300s are already sold out.

The games in Buffalo were stupendous. The intimate venue at HarborCenter offered a loud, raucous and exciting atmosphere for the games staged there. New Era Field was a snow globe of fun, and the mix of USA and Canada fans combined with a game that was settled via shootout had everyone buzzing. Team Slovakia’s last minute goal over Team USA gave that country their own “Miracle on Ice” moment, this, coming just a minute after Sabres prospect Casey Mittelstadt electrified the crowd with what was arguably the highlight reel goal of the tournament.

For all of Canada, they finally had their moment of glory on Buffalo ice, a moment seven years in the waiting after their brutal loss to the Russians here in 2011. The unsung hero was a player named Tyler Steenbergen, who gave the Canadians a 2-1 lead with 1:40 left against the powerhouse Swedes. An empty net goal sealed the deal and the full house sung “Oh, Canada!” to the rafters and the heavens. A fitting and feel good end for the tournament and our Canadian friends.

The tournament moves to British Columbia in Canada next year then on to the Czech Republic in 2020. “From there we will assess the rotation amongst this continent and Europe,” said Fischer. The World Juniors could return to the United States as early as 2022. “2025 looks more likely,” Fischer admitted.

Will Buffalo make another play to land the World Juniors at the next go around for a USA city? Sabres’ Mike Gilbert replied that the organization is always looking to bring top caliber events such as this one to the city. Buffalo will be the host for the NCAA men’s hockey Frozen Four in 2019, and another NCAA mens basketball subregional will follow a couple years after that.

While the betting line would be that it’s time to give other USA cities a shot (the competition was fierce amongst several bids for this 2018 event), lots can happen in the coming years.

So let’s call it out now… World Juniors 2025 to be hosted here in Buffalo, New York. The USA vs Canada game will be held in the inaugural year of the new stadium of the Buffalo Bills in downtown Buffalo, with the retractable roof open if weather conditions allow. Fans will partake in a bucolic Championship Village at Canalside, offering over 80 shops and restaurants along with a children’s museum and an indoor interactive winter park. Weather permitting the opening ceremonies will take place in the new Canalside amphitheater, complete with an electrifying fireworks display over the Outer Harbor.

Visitors from other countries can hop the newly opened Metrorail line running from downtown Buffalo to steps from the cataracts of Niagara Falls for day trip sightseeing.

The Sabres will offer three “packages”, a “Canada pack” with “A” pricing, a “USA pack” with “B” pricing, and “C” pricing $10 general admission tickets for all other games. Dollar hot dogs, soda pop and other refreshments will be available for any games not involving the USA and Canada.

We can dream, right?