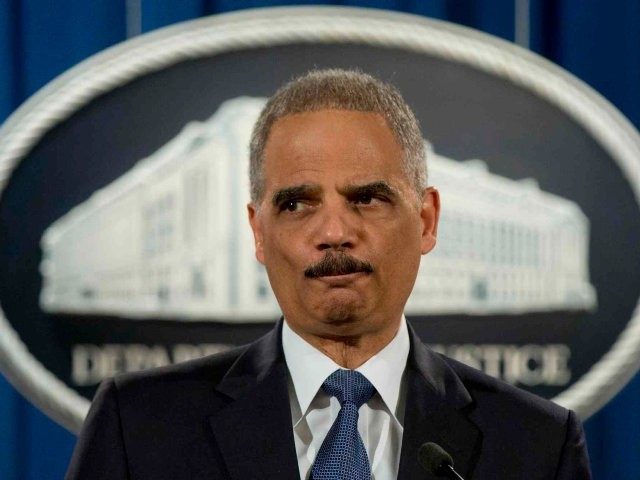 “You technically have an obstruction of justice case that already exists,” Holder said on HBO’s “Real Time with Bill Maher.”

“I’ve known Bob Mueller for 20, 30 years; my guess is he’s just trying to make the case as good as he possibly can. So, I think that we have to be patient in that regard,” said Holder.

Trump critics have hoped for an obstruction charge since Trump fired FBI Director James Comey in the midst of an investigation into potential ties between the Trump campaign and Russia.

Some think the president can fire an FBI Director any time he wishes.

Harvard Law professor Alan Dershowitz said, “You cannot charge a president with obstruction of justice for exercising his constitutional power to fire Comey and his constitutional authority to tell the Justice Department who to investigate, who not to investigate That’s what Thomas Jefferson did, that’s what Lincoln did, that’s what Roosevelt did. We have precedents that clearly establish that.”

“I have absolute right to do what I want to do with the Justice Department,” Trump told the New York Times in December 2017.

Attorney General Jeff Sessions recused himself from oversight of the Russia investigation due to his role on the Trump campaign. That decision paved the way for Deputy Attorney General Rod Rosenstein to appoint Mueller as special counsel.

Trump, more or less, dissed Session [who some argue has not been as loyal to Trump as Holder was to Obama] when he offered a left handed compliment to Holder.

Trump told the New York Times, “I don’t want to get into loyalty, but I will tell you that, I will say this: Holder protected President Obama. Totally protected him. “When you look at the [criminal, unethical, immoral, treasonous] things that they did, and Holder protected the president. And I have great respect for that, I’ll be honest.”

Holder rebutted, telling Maher, “The difference between me and Jeff Sessions is that I had a president I didn’t have to protect.”

While Holder claims he did not need to protect his old boss on Monday, the Department of Justice announced on Wednesday that additional documents related to the US government’s gun running scheme called Operation Fast and Furious will be released.
The Fast and Furious scandal occurred during the Obama administration and documents long fought by Obama and Holder to be hidden will be released to the House Oversight Committee.
Because these documents were possibly illegally withheld by Holder – he was voted in civil and criminal contempt of Congress for refusing to turn them over – he may yet face an obstruction of justice investigation.
He would have faced it at the time but President Barack Obama invoked executive privilege in June 2012 to prevent their release just hours before the contempt vote against Holder was held.In that respect, the two men – Holder and Obama – could be fairly said to have protected each other – just like Trump said.What they had to hide may soon be apparent.

Suggesting Holder, as attorney general, was anything but transparent, Attorney General Jeff Sessions said in a statement.“The Department of Justice under my watch is committed to transparency and the rule of law. This settlement agreement is an important step to make sure that the public finally receives all the facts related to Operation Fast and Furious,”

The Department of Justice issued a statement that the document release is part of “the conditional settlement agreement, filed in federal court in Washington D.C.” and  “would end six years of litigation arising out of the previous administration’s refusal to produce documents requested by the Committee.”

Operation Fast and Furious was a secret ATF program, overseen at the Department of Justice, which took place between September 2009 and December 2010. Border Patrol Agent Brian Terry was murdered by Mexican cartel rip crew members in December 2010. They were carrying guns illegally trafficked by ATF to Mexico through the Fast and Furious program.

[And the NRA is a terrorist organization?]

The Fast and Furious operation ended in 2010 when Agent Terry was murdered and years of coverups surrounding his death and the extent of the operation ensued. Hundreds, if not thousands of Mexican citizens have been murdered as a result of the U.S. government putting guns into the hands of narco-terrorist. A number of firearms trafficked during the operation have been found at additional crime scenes in the United States.

Will Jeff Sessions charge Eric Holder and Barack Obama for obstruction of justice in their conspiracy to coverrup the murder of Mexicans and American[s] from the illegal US government gun running scheme of the Obama administration?

Sessions may technically have an obstruction of justice case that already exists. He may just be trying to make the case as good as he possibly can. Trump supporters have to be patient in that regard.

Meantime, let’s everyone boycott the NRA.

Understanding Jury Nullification and why it may save America from the Deep State, Police State
DiLaura: Power to Prosperity Plan proposed by former FBI Special Agent