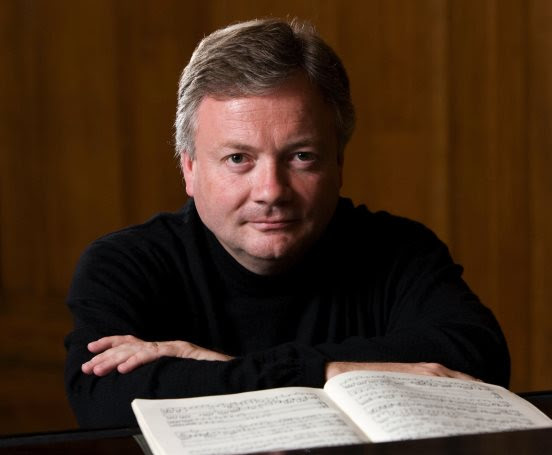 David Hill, who celebrates 20 years as Musical Director of The Bach Choir this year, has been honoured with the prestigious RCO medal alongside three other musicians who have made major contributions to the world of music.

The Royal College of Organists is to recognise the achievements of four distinguished musicians by awarding them its highest honour, the RCO Medal. The recipients of the RCO Medal in 2018 are:

The honorands received the RCO Medal at the College’s Conferment of Diplomas at Southwark Cathedral on Saturday 10th March 2018.

The Bach Choir, one of the world’s leading choruses, has sung in prestigious venues around the UK, collaborated with the Rolling Stones, and worked on blockbuster films including Ridley Scott’s Prometheus. The Choir’s next concert takes place on Sunday 18th March (Bach’sSt Matthew Passion) at the Royal Festival Hall.

Founded in 1876 The Bach Choir regularly performs classical repertoire in major London and international venues and has recorded widely, from a series of English music discs for Naxos to a range of music for film scores including: The Martian, Kingdom of Heaven, Prometheus, Robin Hood, The Chronicles of Narnia, Shrek the Third, and Jack the Giant Slayer.  In 2011, The Bach Choir collaborated with John Rutter and the Royal Philharmonic Orchestra on The Colours of Christmas, which reached No 3 in the Official Classical Charts.
RCO President Martin Baker said: “This year’s honorands have enjoyed international acclaim in their respective fields for many years and it is an honour for the College to acknowledge their many achievements by awarding them The RCO Medal. “Both organ performance and choral conducting, areas with which the College is inextricably linked, are represented in equal measure in this round of awards. I am delighted too that we can acknowledge the vast interdisciplinary endeavour that is music, by reflecting on the range of distinguished achievements for which ourhonorands are known. For instance, playing is allied to composition, playing and directing with the nurturing of young players and conductors, and performance with ground-breaking research. The Conferment Ceremony offered a wonderful opportunity to celebrate such endeavours alongside the achievements of the College’s members who have been successful in recent diploma and certificate examinations.”

Awarded for the first time in 2012, The Medal of the Royal College of Organists (‘The RCO Medal’) recognises distinguished achievement in one or more of the following areas relating to organ and choral music: performance, teaching, scholarship, composition, organ-building, conducting, administration, and philanthropy; it is also available to recognise specific service to the College.

Back in the 1980s, as Director of Music at Westminster Cathedral, David would walk from the Apse of Westminster Cathedral back to his office after a service. He remembers looking through the window into the Hall, watching Sir DavidWillcocks on the rostrum, with his close friend, the late John Scott, accompanying, and listening to the energy from the Choir. ‘‘I often wondered who would succeed Sir David when he retired, never for one moment thinking it would be me!’’

Mark Bridges, the Choir’s then Treasurer, sat on the appointment panel convened by Leopold de Rothschild to find Sir David’s successor. ‘‘At the outset, we were very concerned that we might not be able to find someone of the highest quality, who would be prepared to rehearse the Choir every Monday as well as conduct the concerts. I suggested David Hill, as I had friends with children who were choristers at Winchester Cathedral, where David was then Director of Music, and knew of the great things he was doing there. My only regret is that the demands of my professional life meant that I had to resign as a singing member a few years later, and now have to enjoy David’s inspirational direction from the auditorium.’’

There have, of course, been some notable names in the Choir’s history: Ralph Vaughan Williams, Charles Villiers Stanford, and Adrian Boult – to name just three. David Willcocks stands out for his length of service – 38 years – and David Hill was acutely aware of the responsibility to build on, and maintain, the Choir’s fine legacy. His first rehearsal was Elgar’s The Dream of Gerontius.

‘‘I was struck by the immediacy of the sound, the Choir’s precision, excellent intonation, rhythm, and the speed at which it could work. I have always adopted the view that when something is already very good, then continue to build on those firm foundations.’’ There was no sudden change of style or approach and, as one singing member remarked, ‘‘I remember the take-over from one David to the next being very smooth – no hiatus or hiccup, just a really efficient passing of the reins from one to the other, which gave us all confidence for the future.’’

David’s focus has been on text, choral colour and blend, and he has spent considerable time ‘voicing’ singers. Everyone isassigned a ‘colour’ – red, yellow, or white – depending on the particular characteristics of their voice, and seating the Choir with the red voices in the centre of each section, surrounded by the yellows, with the whites on the outside, allows singers to develop their own sound amongst others with similar qualities, and has a profound effect on the immediacy of the sound.

Both recording and commissioning were projects high on David’s agenda when he took over – and remain so today – and a series of discs of English music soon followed, with works – some undeservedly neglected – by Vaughan Williams, Howells, Delius, Stanford and Dyson, with more Howells planned for 2019. A new work was commissioned from John Tavener and performed at the BBC Proms in 2001, and others have followed at the rate of one or two every couple of years – from CarlRütti, Naji Hakim, Bob Chilcott, Jonathan Dove, Will Todd and James MacMillan.

Since David took over in 1998, the Choir has toured widely, with performances in Germany and The Netherlands, as well as further afield – Lebanon, Australia, China and Hong Kong. Singing together over an extended period of time really allows the Choir to finesse its sound as a group, and flying the British flag abroad is central to David’s ambitions for the Choir.

The first venture into Europe under David’s direction was a tour to Germany in 2001. Travelling between Frankfurt and Leipzig, we had the opportunity to stop off in Eisenach and to visit the house where Bach was born (now a museum), and the church he attended. Paul Collins, now an Associate member, remembers the Choir informally singing a couple of chorales from the St Matthew Passion in the church. ‘‘After that, David sat down at the organ, took his shoes off – exposing a natty pair of blue socks – and played Bach’s Passacaglia and Fugue in C minor from memory (pictured, right). Simplymesmerising!’’

In 2005 the Choir returned to Germany, this time to sing at the re- opening concert of the Frauenkirche in Dresden, restored following Allied bombing in the Second World War. David recalls that ‘‘a remarkable lady, who had lost her mother in the bombing of the city, joined us – as a member of the Choir – for an emotionally charged performance of Messiah.’’ As the Choir left the stage at the end, many members of the audience were visibly moved by the significance of the occasion.

Enduring memories are often created during down-time on foreign tours. David’s love of cars is well-known, but it reached new heights on a return visit to Dresden in 2007 – this time to perform Haydn’s Creation. The offer of a self-drive tour of Dresden in a genuine East German Trabant proved irresistible and, with a group of intrepid singers, none of whom were required to provide driving licences, David enthusiastically took the wheel of the 20-year-old vehicle which had certainly seen better days. Singer David Picton- Turbervill remembers: ‘‘We set off into the Dresden traffic, and the awful moment came to change from first to second gear. Despite the Trabant’s sophisticated double-declutch mechanism, it proved impossible to achieve, and we slowly ground to a halt in the middle of a major road. With a tram bearing down on us from one direction, and an enormous coach from another, along with much sounding of horns, David tried to coax the Trabantback to life accompanied by language definitely not suitable for printing in a St Matthew Passion programme!’’

In 2001 The Bach Choir marked its 125th anniversary with a Royal Gala at the Royal Opera House, Covent Garden, attended by HRH The Prince of Wales. David recalls ‘‘an incredibly special occasion, when Belshazzar’s Feast with Thomas Allen was particularly memorable. And I particularly remember the same work in the Royal Festival Hall some years later, when I lost my baton into the audience during the last minute!’’

One of David’s fondest memories is of long-standing singing member and the Choir’s archivist until his death, Basil Keen. ‘‘Basil was someone I so respected, and he was, quietly in the background, a mentor and confidant. We would meet annually for a round of golf; I tried to persuade him that this wasn’t necessary given the status of my game, but he always insisted on seeing whether I had improved! We would talk about the Choir the whole time and when I said that I hoped my up-beat before the Choir engaged its sound was better than the swing I was about to attempt, he burst into laughter and assured me it was, just as I managed to produce yet another display of golfing incompetence.’’

So how is The Bach Choir of 2018 different from the Choir of 1998? ‘‘The Choir still has the distinctive sound and directness which also belonged to the Willcocks era, but maybe the biggest difference is that we now have around 120 members under the age of 30. I believe it is the quality and diversity of our programming which engages the membership and brings us new singers month by month.’’ The opportunity to rehearse and perform under David Hill must surely be a factor too.