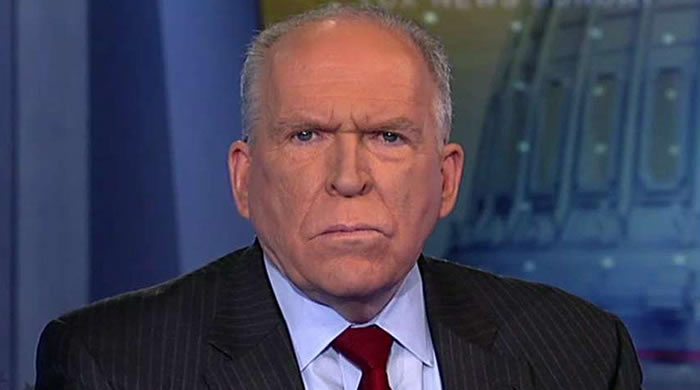 “DOJ statement and indictments reveal the extent and motivations of Russian interference in 2016 election. Claims of a “hoax” in tatters. My take: Implausible that Russian actions did not influence the views and votes of at least some Americans.”  – February 16, 2018 Tweet by John O. Brennan, former CIA Director.

There can be no doubt that panic is rapidly setting in among the principal players of the neo-leftist Obama-Clinton-Democrat crime cabal that has largely been consigned to watching –  impotently – from the sidelines as the central pillar of their plot to frame and take down President Donald J. Trump — the Trump-Russia collusion hoax – has begun to crash down on top of them.

At the heart of this Obama-Clinton-Democrat -FBI-DOJ-CIA-FISA Court cabal is the originator of the Trump-Russia collusion hoax himself, the deepest deep state denizen of the bunch, former CIA Director John O. Brennan.

As our country’s Russian Collusion Hoaxmaster General, John Brennan has good reason to be worried.

It is obvious to anyone near Brennan that he is bitter, acrimonious, hellbent on malicious retribution, and likely the Obama-Clinton coup plotter with the most to fear should President Trump, and a newly-inspired, freshly-fumigated DOJ actually perform its constitutional duty and prosecute these manipulative Obama-Clinton gangsters.

Thanks to the unflappable courage of the House Intelligence Committee Chairman and astute, stalwart truth-seeker Devin Nunes, John Brennan’s legal jeopardy is real and the most immediate of all the Obama-Clinton sedition mechanics.

Investigative journalist Paul Sperry broke the news last month that Nunes is initiating an investigation into Brennan’s central and leading role in promoting and leaking the “dirty dossier” in a manic effort to smear Donald Trump with any and every means at Brennan’s disposal. (Just consider the import of this proposition, given that Brennan was the DIRECTOR OF THE CIA!).

It is almost certain that Brennan perjured himself before the House Intelligence Committee in May 2017, at minimum, when he denied knowledge of the origin of the Steele dossier and that it was in any way used in the intelligence community “assessment” that the Russians were attempting to influence the 2016 election, specifically via the Trump Campaign.

Brennan testified that: “the information and intelligence revealed contacts and interactions between Russian officials and US persons involved in the Trump campaign that I was concerned about because of known Russian efforts to suborn such individuals. It raised questions in my mind about whether the Russians were able to gain the cooperation of such individuals.”

When Rep. Trey Gowdy asked Brennan directly about any evidence that Trump officials colluded with the Kremlin, Brennan said “I don’t know” and “I don’t know whether such collusion existed.”

Yet in the same response, Brennan said that there was a sufficient basis of information and intelligence that required further investigation by the FBI to determine whether or not US persons were actively conspiring or colluding with Russian officials.

Brennan also testified that he had no knowledge of who commissioned the anti-Trump reports, although senior national security and counterintelligence officials at the DOJ knew in 2016 that the Clinton campaign had funded them.

It is extremely unlikely that Brennan somehow didn’t know of Clinton’s role in the fake reports.

It was Brennan, after all, who in April 2016 supplied the reports to Obama and then briefed Hill Democrats on its existence.

If the Russians had a plan to destabilize and influence our elections then John Brennan was carrying out that plan to the letter.

What Title and Section of US Code is Mueller investigating?
Tablet reveals reason Mueller hangs on – not to find, but to cover up crimes