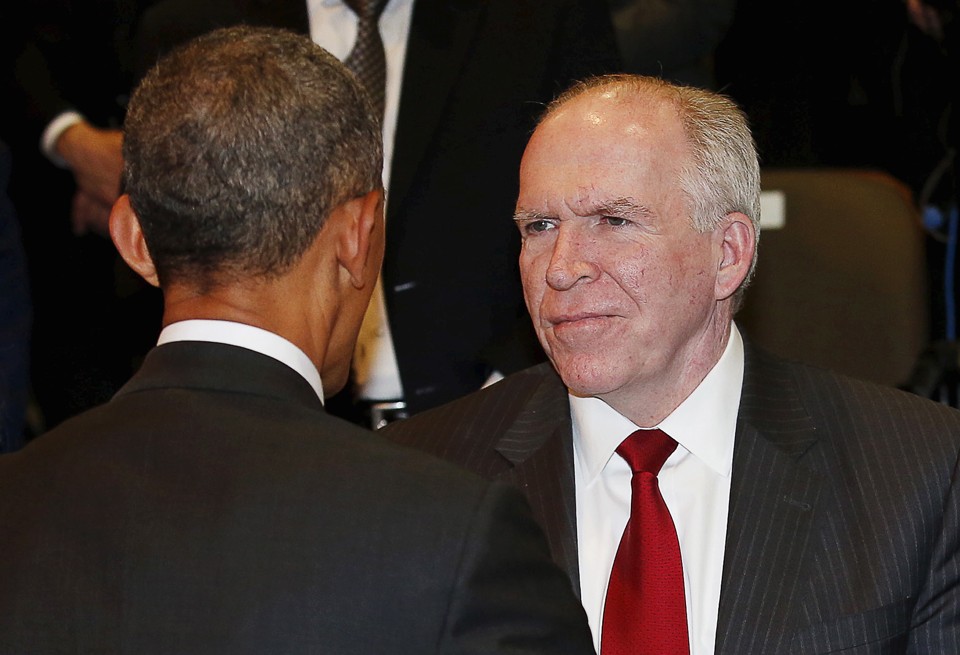 Former CIA field operations officer Gene Coyle said John O. Brennan was “known as the greatest sycophant in the history of the CIA, and a supporter of Hillary Clinton before the election. I find it hard to put any real credence in anything that the man says.”

In Brennan’s CIA Director confirmation hearing, he refused to answer questions by Sen. Rand Paul about the Obama administration’s use of lethal drone attacks on U.S. citizens in U.S. territory.

Brennan coyly responded that the U.S. “has not carried out such attacks” and “has no intentions of doing so.” The Obama administration did, however, conduct such attacks on U.S. citizens abroad.

In 2016, Brennan admitted that in the 1976 presidential election he supported the Communist Party presidential candidate – a hard line Stalinist named Gus Hall.

In March 2014 Brennan denied to Associated Press that CIA was involved in hacking U.S. Senate computers. Barely three months later, Brennan was back, publicly apologizing to the Senate Intelligence Committee leadership for… you guessed it… CIA hacking of Senate computers.

This little outrage clearly demonstrated that Brennan is both a manipulator and a liar, who has absolutely no respect for the notion of oversight by elected representatives, or for the sanctity of our 1st branch of government as representatives of the people.

The origins of the Trump – Russia collusion started when John Brennan used phony and uncorroborated intel provided by Estonian spies to British intelligence assets purporting to show a link between the Kremlin and members of Trump’s campaign.

The BBC’s Paul Wood reported last year that the intelligence agency of an unnamed Baltic State had tipped Brennan off in April 2016 to a conversation that supposedly indicated that the Kremlin was funneling cash into the Trump campaign.

Even Brennan’s equally bald-headed Obama administration soulmate, Director of National Intelligence James Clapper, discounted the report saying, “we could not corroborate the sourcing.” That should have put an end to the whole thing.

Brennan didn’t think so and despite having no corroboration for the Estonian intel he attached the information to an official report to President Obama.

Brennan also included these unverified allegations in a briefing he gave to Hill Democrats known as the “Gang of Eight,” practically guaranteeing that it would be leaked.

Of course, it was.

The Washington Times reported that “[m]embers of President Trump’s inner circle charged Sunday that former CIA director John O. Brennan is trying to undermine the relationship between the new administration and the intelligence community on his way out the door.”

When President Trump officially visited the CIA headquarters for the first time to support and bridge any gap with the intelligence community, Trump blamed it on “dishonest” media reporting.

Brennan used the opportunity to take a swipe at Trump.

President Trump tweeted an immediate rebuttal: “Brennan says that Trump should be ashamed of himself…Is this the leaker of Fake News?”

Then-White House Chief of Staff Reince Priebus added, “I think that Brennan has a lot of things that he should answer for with regard to these leaked documents…I think perhaps he’s bitter.”

There is much about John Brennan that warrants investigation.