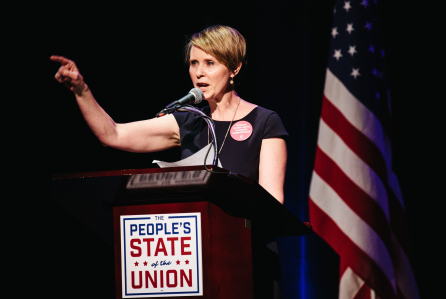 The crisis began when factories in the small Rensselaer County community of Hoosick Falls  contaminated the public water supply with Perfluorooctanoic Acid, known as PFOA. PFOA has been linked to at least 6 serious illnesses: thyroid disease, kidney cancer, testicular cancer, ulcerative colitis, pregnancy-induced hypertension, and diagnosed high cholesterol. Testing found high levels of PFOA in the drinking water and in the bodies of local residents.
Democratic Candidate for governor Cynthia Nixon visited Hoosick Falls yesterday and met with residents who provided firsthand accounts of what it is like to deal with the toxic contamination of their drinking water.
Nixon was joined by community members and environmental activists to discuss the state’s response to the crisis.

The State Health Department was aware of the drinking water problem for 18 months before local residents were told of the problem by the State. State and county health department held secret negotiations with the polluter in an effort to reach an agreement on how to deal with the problem, leaving unsuspecting residents, including children and pregnant women, to consume contaminated water every day.

“No family should have to live through what these people have had to endure,” said Nixon. “As a parent, I cannot imagine having to wonder about whether giving your child a glass of water could have put them at risk of future sickness. It is deeply troubling that the New York State Health Department, an agency that exists to protect our health, knew about this problem and did not tell local residents about it. We need a state government that puts the health of our people over the interests of corporate polluters.”

The federal Environmental Protection Agency ultimately stepped in and advised residents not to drink the water after a lack of action by the state Health Department. The contamination is so severe that parts of Hoosick Falls have been designated as Superfund sites, on both the New York State and federal EPA Superfund list.

If elected governor, Nixon said she will:

Nixon was joined by environmental leader Judith Enck. As EPA Regional Administrator during the Obama Administration, Enck instructed residents to stop drinking the contaminated water. Enck previously served as New York’s Deputy Secretary for the Environment in the Spitzer and Patterson administrations.

“As the federal official who alerted the public about the risk of drinking the toxic water in Hoosick Falls, I continue to be concerned that the State of New York has not learned the lessons from their water crisis,” said Enck. “It is time for new environmental leadership in New York.”