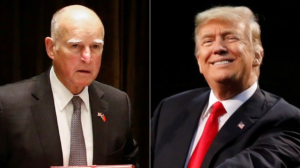 On Tuesday, California Gov. Jerry Brown defended his decision to pardon five illegal aliens who have criminal records and were facing deportation.

Trump criticized the pardons in a March 31 tweet, saying, “Governor Jerry ‘Moonbeam’ Brown pardoned 5 criminal illegal aliens whose crimes include (1) Kidnapping and Robbery (2) Badly beating wife and threatening a crime with intent to terrorize (3) Dealing drugs. Is this really what the great people of California want? @FoxNews” Brown responded, “I’m trying to deal with the human crisis. We have people deported. These children don’t have parents.”