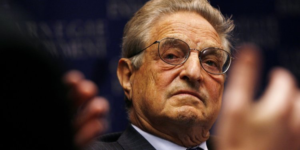 It is headed by Colombian lawyer Ivan Velásquez, and known for left alliances. Soros’ OSF describes the CICIG as “a potential model for other states”. The U.S. government has funded it with approximately $36 million in taxpayers’ money.

Barack Obama’s ambassador to Guatemala, Todd Robinson, and Velásquez collaborated to promote changes to the Guatemalan constitution. The Trump administration has supported Velásquez and the CICIG.

A multitude of entities funded by the U.S. government further Soros’ agenda in Guatemala and get money from the billionaire. The report identifies a dozen of them, their mission and their ties to Soros’ OSF. Among them is Chemonics International, a private development firm that partnered with OSF in Albania and received a $37 million grant from the U.S. Agency of International Development (USAID) for a Guatemalan youth and gender justice project.

A Sorors-funded group called Fundación Para El Ecodesarrollo y la Conservación (Foundation for Ecodevelopment and Conservation) got $1 million USAID grant for sustainable water management project in Guatemala and $156,000 from the U.S. Fish and Wildlife Service for a rainforest protection project.

In 2018 Soros is projected to expend more than $500 million to promote his agenda in the world.

Last year Judicial Watch reported on a collaborative effort between the U.S. government and Soros in Macedonia.

Records obtained by Judicial Watch in that investigation show that the U.S. Ambassador to Macedonia worked with OSF to dispense $5 million American taxpayer dollars through the State Department and USAID.

Judicial Watch says this was “an interference of the U.S. Ambassador in domestic political affairs in violation of the Vienna Convention on Diplomatic Relations.”