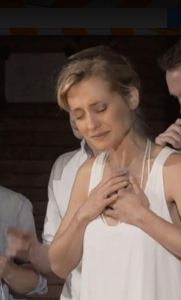 Today the prosecution in the US v Allison Mack will make their argument before the judge seeking to prevent Mack being released on bail.

Here is their letter to the court:

The government respectfully submits this letter to set forth the government’s position with respect to bail in anticipation of the defendant Allison Mack’s arraignment on the above-captioned indictment. For the reasons set forth below, the government respectfully submits that Mack poses a risk of danger and risk of flight and should only be released
pursuant to a substantial, heavily secured bond, commensurate with Mack’s financial resources, signed by a number of financially responsible sureties unaffiliated with Nxivm, and subject to additional conditions of release including, among others, home detention with electronic monitoring.

On April 19, 2018, a grand jury sitting in this District returned an indictment
charging Keith Raniere and Allison Mack with sex trafficking, sex trafficking conspiracy and conspiracy to commit forced labor. As described in the complaint filed against Keith Raniere on February 14, 2018 (18-M-132), in which Mack (hereinafter, the “defendant”) is referred to as “CC-1,” the defendant is alleged to have recruited and persuaded young women into joining a secret organization called “DOS” or the “Vow.” DOS is comprised of “masters” who recruit and command groups of “slaves.” The defendant recruited prospective DOS slaves to join DOS by describing it as a women’s empowerment group or sorority. The defendant had women provide her with “collateral,” which consisted of naked photographs, assets, criminal confessions and other damaging information, to prevent the women from leaving the group or disclosing its existence to others. Once they joined, DOS recruits were required to provide additional collateral, which they did, fearing that their original collateral would be released.

DOS masters, including the defendant, also demanded that DOS slaves
participate in “readiness” drills, which required them to respond to their masters any time of day or night, causing DOS slaves to be seriously sleep-deprived. DOS slaves were also branded in their pelvic regions with a cauterizing pen with a symbol that, unbeknownst to them, incorporated Raniere’s initials.

For the reasons set forth below, the government respectfully submits that,
given the serious risk of flight and danger to the community that the defendant poses, the defendant should be released only pursuant to a substantial secured bond signed by several financially responsible U.S.-based sureties who are unaffiliated with Nxivm. In addition, the
Court should order home confinement with electronic monitoring.

By contrast, detention based on dangerousness must be supported by clear and convincing evidence. 18 U.S.C. § 3142(f).

The concept of “dangerousness” encompasses not only the effect of a
defendant’s release on the safety of identifiable individuals, such as victims and witnesses, but also “‘the danger that the defendant might engage in criminal activity to the detriment of the community.’” United States v. Millan, 4 F.3d 1038, 1048 (2d Cir. 1993) (quoting legislative history). In addition, when a finding of dangerousness is related to violent conduct, it need not be shown that the defendant personally engaged in violence. United States v. Colombo, 777 F.2d 96, 98 (2d Cir. 1985).

II. The Defendant Is a Risk of Flight and a Danger to the Community
A. Nature and Circumstances of the Crimes Charged.

The charges the defendant faces are extremely serious. The defendant is
charged with using force, fraud and coercion to recruit and maintain DOS slaves, and instructing those slaves to engage in sexual acts with Raniere, among other assignments. The defendant aggressively recruited DOS slaves and required those slaves to recruit slaves of their own. As alleged in the complaint charging her co-defendant, the defendant was focused
on recruiting attractive young women who could meet Raniere’s sexual preferences. The government’s evidence includes admissions by the defendant to witnesses reflecting the defendant’s understanding of the true purpose of DOS, including that DOS slaves would be instructed to have sex with Raniere.

The defendant’s slaves were kept seriously sleep-deprived and emaciated to the point where they stopped menstruating. During the ceremonies in which her slaves were branded, the defendant placed her hands on the slaves’ chests and told them to “feel the pain” and to “think of [their] master,” as the slaves cried with pain. The defendant also provided
naked photographs of her slaves to Raniere and was aware of Raniere’s proclivity for having sex with multiple young women.

Reflecting the seriousness of the charged offenses, the sex trafficking count set forth in Count One carries a mandatory minimum sentence of 15 years’ imprisonment and a maximum sentence of life imprisonment. Such a heavy term of incarceration creates a substantial incentive to flee. The Second Circuit has held that the possibility of a severe sentence is an important factor in assessing flight risk. See United States v. Jackson, 823
F.2d 4, 7 (2d Cir. 1987); Martir, 782 F.2d at 1147 (defendants charged with serious offenses whose maximum combined terms created potent incentives to flee); United States v. Cisneros, 328 F.3d 610, 618 (10th Cir. 2003) (defendant was a flight risk because her knowledge of the seriousness of the charges against her gave her a strong incentive to
abscond); United States v. Townsend, 897 F.2d 989, 995 (9th Cir. 1990) (“Facing the much graver penalties possible under the present indictment, the defendants have an even greater incentive to consider flight.”); United States v. Dodge, 846 F. Supp. 181, 184-85 (D. Conn. 1994) (possibility of a “severe sentence” heightens the risk of flight).

B. History and Characteristics of the Defendant
The history and characteristics of the defendant also militate in favor of a
substantial bail package and restrictive pre-trial conditions. Given her status within DOS and her access to DOS slaves’ collateral, the defendant poses a particular threat because of her ability to direct others to carry out activities on her behalf. In light of the number of witnesses who are themselves members of DOS and have provided collateral and vows of
obedience to the defendant and other DOS masters, there is a significant and unique risk of witness intimidation and tampering which must be mitigated. Cf. 18 U.S.C. § 3142(f)(2)(B) (court may also order detention if there is “a serious risk that the [defendant] will . . . attempt to obstruct justice, or . . . to threaten, injure, or intimidate, a prospective witness or juror”).

The government has obtained evidence that after its investigation was reported in the press, high-ranking members of DOS undertook efforts to undermine potential witnesses, including by registering domain names such as [Witness Name]exposed.com, with the intention of publishing damaging information regarding those witnesses.

Although the defendant has in the past year rented an apartment in Brooklyn, her ties to the Eastern District of New York are limited, as her family lives in California. She has also traveled extensively within the past five years and has powerful contacts associated with Nxivm across the United States and abroad. For instance, the son of a former Mexican
president is the head of a Nxivm center in Mexico. When Keith Raniere was apprehended in Mexico, the defendant had been living with him at a luxury villa which cost over $10,000 a week to rent. Other high-ranking members of Nxivm have access to vast financial resources, in the millions of dollars.

In the absence of a substantial bond with extensive conditions, the Court
would not have sufficient means to ensure that the defendant would not commit additional crimes during any period of release or that she would not otherwise violate bail conditions, such as by contacting her former coconspirators or other witnesses who could testify against her.

C. Evidence of the Defendant’s Guilt
Finally, the weight of the evidence against the defendant is strong. The
government’s evidence includes witness testimony that is corroborated by, among other evidence, electronic communications between the defendant and her co-conspirators and other documentary evidence and records. These electronic communications evidence the defendant’s involvement in DOS recruitment, her participation in conducting “readiness” drills and the assignment of tasks and penances, and other efforts aimed at the continued manipulation and coercion of DOS slaves. This factor, too, strongly favors detention in the absence of a significant bail package.

For the reasons set forth above, the government respectfully submits that the defendant should not be released unless and until she posts a substantial secured bond, as well as the signatures of several financially responsible sureties who are not affiliated with Nxivm. Further, any such release should be under the conditions of home confinement with
electronic monitoring, among other restrictions.