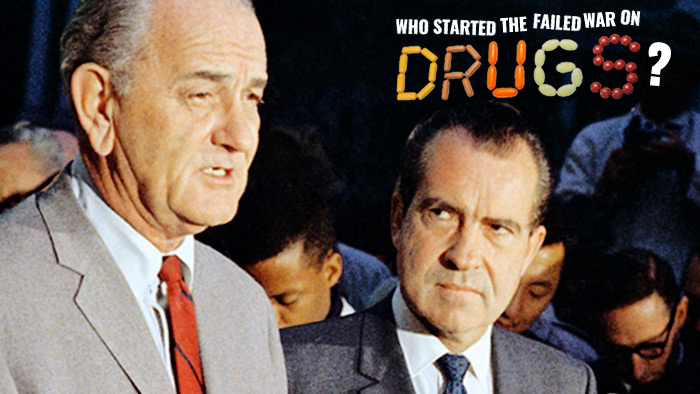 For many years it was assumed that Pres. Richard M Nixon had started the failed war on drugs. My research however has determined that it was none other than President Lyndon Baines Johnson who launched this ignominious, racist failure of public policy. Here is LBJ’s message of February 7, 1968

Message of the President

To the Congress of the United States:

In my first Reorganization Plan of 1968, I call for the creation of a new and powerful Bureau of Narcotics and Dangerous Drugs.

With this action, America will serve notice to the pusher and the peddler that their criminal acts must stop.

Today, Federal investigation and enforcement of our narcotics laws are fragmented. One major element—the Bureau of Narcotics—is in the Treasury Department and responsible for the control of marihuana and narcotics such as heroin. Another—the Bureau of Drug Abuse Control—is in the Department of Health, Education, and Welfare, and is responsible for the control of dangerous drugs including depressants, stimulants, and hallucinogens such as LSD.

Neither is located in the agency which is primarily concerned with Federal law enforcement—the Department of Justice.

This separation of responsibilities—despite the relentless and dedicated efforts of the agents of each Bureau—has complicated and hindered our response to a national menace.

For example, more than nine out of ten seizures of LSD made by the Bureau of Drug Abuse Control have also turned up marihuana—but that Bureau has no jurisdiction over marihuana.

In many instances, we are confronted by well organized disciplined and resourceful criminals who reap huge profits at the expense of their unfortunate victims.

The response of the Federal Government must be unified. And it must be total.

Today, in my Message on Crime, I recommended strong new laws to control dangerous drugs. I also recommended an increase of more than thirty percent in the number of Federal agents enforcing the narcotic and dangerous drug laws.

I now propose that a single Bureau of Narcotics and Dangerous Drugs be established in the Department of Justice to administer those laws and to bring to the American people the most efficient and effective Federal enforcement machinery we can devise.

—consolidate the authority and preserve the experience and manpower of the Bureau of Narcotics and the Bureau of Drug Abuse Control.

—work with states and local governments in their crackdown on illegal trade in drugs and narcotics, and help to train local agents and investigators.

—maintain worldwide operations, working closely with other nations, to suppress the trade in illicit narcotics and marihuana.

—conduct an extensive campaign of research and a nationwide public education program on drug abuse and its tragic effects.

The Plan I forward today moves in the direction recommended by two distinguished groups:

—the 1963 Presidential Advisory Commission on Narcotic and Drug Abuse.

This Administration and this Congress have the will and the determination to stop the illicit traffic in drugs.

But we need more than the will and the determination. We need a modern and efficient instrument of Government to transform our plans into action. That is what this Reorganization Plan calls for.

The Plan has been prepared in accordance with chapter 9 of title 5 of the United States Code.

I have found, after investigation, that each reorganization included in the plan is necessary to accomplish one or more of the purposes set forth in section 901(a) of title 5 of the United States Code.

I have also found that, by reason of these reorganizations, it is necessary to include in the accompanying plan provisions for the appointment and compensation of the five new positions as specified in section 3 of the plan. The rates of compensation fixed for these new positions are those which I have found to prevail in respect of comparable positions in the Executive Branch of the Government.

Should the reorganization I propose take effect, they will make possible more effective and efficient administration of Federal law enforcement functions. It is not practicable at this time, however, to itemize the reduction in expenditures which may result.

I recommend that the Congress allow this urgently needed and important Reorganization Plan to become effective.

To Reform Policing, We Must Use Our Brains
FINAL REMAINING CONSERVATIVE VOICES ON FACEBOOK WILL BE ELIMINATED BY ELECTION DAY LIBERALS CAN’T HANDLE THE TRUTH!
Comment