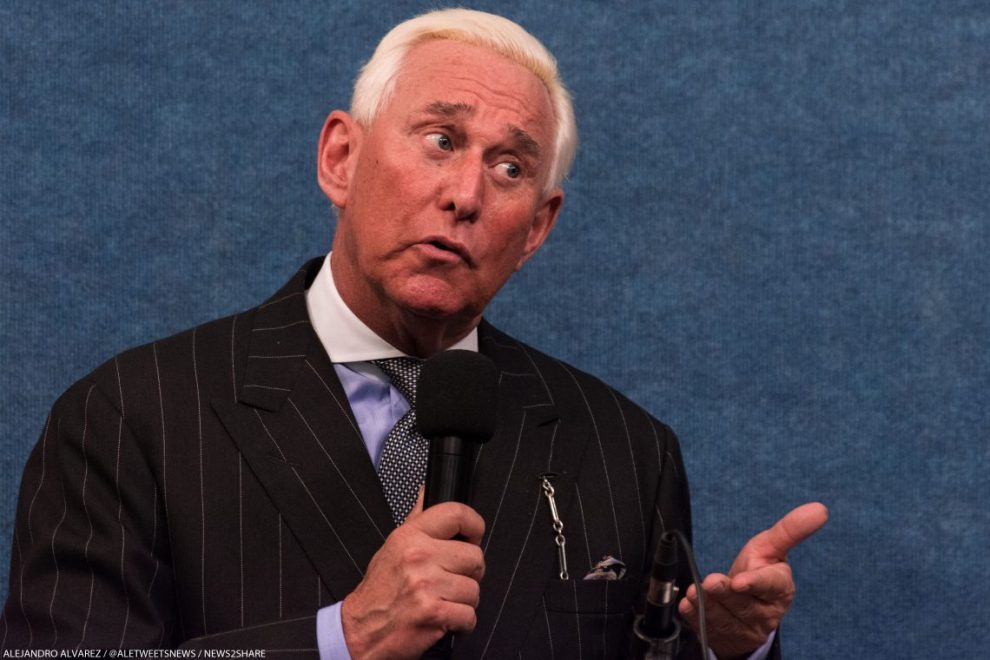 Gates, an associate of Paul Manafort, and a low level minion of the Trump campaign, was indicted in October 2017, by a Mueller grand jury on charges of conspiracy to defraud the United States and of false statements, among other charges, all having nothing to do with Russian collusion, collaboration, conspiracy or cockamamie.

Poor Gates. He pled guilty in February 2018 to one count of conspiracy against the United States and – because he was dumb enough to enter Mueller’s perjury trap – one count of false statements. These felonies entail potential years in prison. But, as part of the plea bargain, Gates agreed to “cooperate” with the Mueller probe. This can mean anything from the full provision of truth, to, as Alan Dershowitz calls it, “composing” facts to suit.

And Stone keeps batting down falsehoods like so many blood engorged mosquitoes; the blood sucking here however is on Stone’s pocketbook; he has to hire attorneys to fend off one after another false assumptions under the color of a true crime investigation. It may cost Stone a million dollars – defending against non existent relationships with non Russian, non colluders.

But anyone is, or could be Russian these days – if it helps get Trump unelected.  CNBC “reports” Mueller is focused on ‘dinners and meetings’ Stone had with Gates.

Stone says he knows of only one dinner he ever attended where Gates was at table. It was a public affair, a poor choice for secret Russian colluding. Stone told Artvoice, “I attended a dinner with Gates with New York Trump campaign officials to discuss the selection of New York delegates to the Republican National Convention after Trump swept the New York Primary.”

The dinner was supposed to be with then-Trump convention manager, Paul Manafort, who canceled at the last minute and sent Gates in his stead, Stone said.  As for “meetings in Trump Tower with Gates” that CNBC says “are [also] the focus of Mueller’s [sharp] probe,” Stone says there simply weren’t any.

“I never met Gates in Trump Tower. Or did I ever have any substantive meeting with Gates elsewhere. In fact, I was never alone with him.”

But these kind of niceties – such as one does not collaborate with Russians at large dinner parties – are largely irrelevant. There is desperation now seen in Mueller that seems to bend innocuous happenstance into the wide-net, but quixotic quest for Russian whispers.

Last month, the Mainstream Media wildly focused on an alleged dinner between Stone and Julian Assange, which was based entirely on a Stone jest about meeting Assange, said by phone, then reiterated by email to former Trump campaign associate, Sam Nunberg.

In early March, Nunberg appeared on multiple networks after being summoned to Mueller’s grand jury, with some commentators believing him to be clearly drunk on air. There, Sam claimed he would not testify before the grand jury, a decision sure to lead to his arrest. Later, Nunberg did testify, admitting also he would seek help for his alcohol and substance abuse problems.

The simple smoking ‘peashooter’ story was that Stone jokingly told Nunberg via email he had dinner with Assange on August 3, 2016. Who knew a joke could be a potential crime for desperate anti-Russian colluder Mueller?

Stone denied having dinner. That wasn’t enough. It didn’t fit the narrative: Assange is a Russian asset, the Russian collusion delusion narratives relates. If Stone had dinner with Assange then they must have done spycraft together. Physical impossibilities got in the way. Stone could not have had dinner. It was a “throwaway line,” “shtick,” to get “neurotic” Sam off the line, a guy who, drunk or sober, would call Stone 40 times a day, Stone said:

Forget the fact that no one has proven Assange is a Russian asset. No one has proven Stone ever had anything to do with Assange’s leaking some truthful, damning, “thank-the-Lord-he-leaked-it” information about a very dishonest, if not criminal Russian colluding Hillary Clinton. But we are not interested in Clinton; we are interested in unelecting Trump.

Still sometimes the truth gets in the way, even with the most integrous deep statist Mueller. Stone could not have had dinner with Assange.

Stone provided media outlets, including Artvoice, with a copy of his passport, showing he did not leave the country at any time in 2016. Then he provided proof of his flight from Los Angeles to Miami, a flight he took on the same day he was supposedly dining with Assange, making dinner with Assange, in exile in the Embassy of Ecuador in London, England, impossible.  Stone was flying from Los Angeles to Miami. Assange was perforce dining in London. Not necessarily alone, but not with Stone.

Mueller and his team will have substantial input on Gates’ sentencing, the length of time he spends in the can, if he spends any time there at all. His sentence recommendation by Mueller will be based, one suspects, on the usefulness and helpfulness of the cooperation Gates provides to the overtly utterly integrous Mueller.

In light of Judge T. S. Ellis III’s rebuke of the Mueller team on Friday, more than implying the Mueller team lied about its charter, the stakes are raised for Mueller to justify the continued existence of the Trump campaign/Russian interference probe, which has not linked any activities of the campaign to Russian interference after more than a year of fact torturing investigation.

If Gates – the ‘Hail Mary kid’ – cannot deliver something to connect the Trump campaign to Russian interference, even an inchoate crime (e.g. attempt, conspiracy), Mueller, who continues to seek delays on General Michael Flynn’s sentencing, [he too went into the perjury trap] may not go easy on Gates.

Gates will need more than a dinner party. How about a secret friendship with Stone that lies deeper than the bowels of secret Russian espionage. CNBC reports that Stone worked with Gates back in days of Black, Manafort and Stone in the 1980’s. Stone was a partner. Gates reportedly was an intern.

Stone said, “I have no memory of Gates from this period and never worked with him on anything- if he was even really there.”

But Stone, alas, did [barely] know of Gates from the campaign, when Russians were hiding behind every tree trying to hurt Hillary Clinton, the old gal whose husband benefited mightily by the Uranium One deal which gave Russia control of the largest share of uranium in the world.

The newest media focus on Stone via Gates is as “vapid and hollow as the Assange dinner, and other past, debunked stories,” Stone claims.

Past debunked stories? Let’s count the already discredited and/or unproven stories about Stone and Russian spooks and cutouts.

“All of this is, of course, designed to distract from the fact the Obama Justice Department and the Obama FBI used a fabricated ‘dossier” prepared with the assistance of Russians as the legal rationale for the surveillance of the campaign of the Republican candidate for president,” said Stone.

It may also be of interest that Stone was likely – as the New York Times reported on January 20, 2017 – subject to an illegally procured FISA warrant himself.

But then it is only fair. Stone was working for the election of Donald Trump and Trump succeeded. Mueller is in there with team-mosquito trying to unelect him.

The use of the state’s authority to spy on Trump supporters seems an unconstitutional abuse of power that makes Watergate look like small potatoes. What did Obama know and when did he know it? Who cares? This is about Trump.

Stone thinks Adam Schiff, the Democrat Congressmen of California, tasked with finding, [or creating] Russians spooking around partisan toilets, after the Democrats’ Trump pee dossier failed to be true, is behind this latest nonsense.

“Quite clearly CNBC’s ‘source’ for this story is completely full of Schiff,” Stone says.

From the Podesta’s tweet, to dinner with Assange, to Guccifer 2.0 to dinner with Gates, the conspiracy theories are wild about Roger Stone. And off the mark, unfortunately for the man who shills for those who want to bag a disobedient president.

“I’m thinking dinner with Putin may be the way for Mueller to go next,” Stone said.