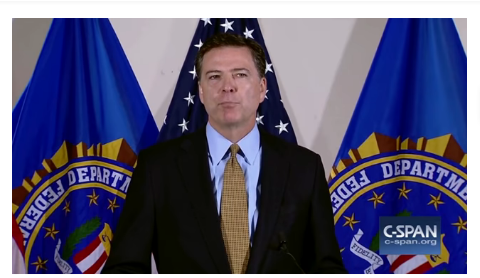 We have been asked to believe that Robert Mueller can fairly investigate matters involving his longtime friend and professional colleague James Comey. This is simply laughable, especially since we know the two of them were conferring in private, a fact we had to go to court to confirm.

We just uncovered new emails from the Department of Justice (DOJ) showing that former FBI Director James Comey was advised by FBI officials in May 2017 to consult with Special Counsel Robert Mueller prior to testifying before any congressional committees regarding Russian meddling in the 2016 presidential election and his firing as FBI director.

According to numerous news reports, Comey met directly with Mueller previous to his June 8, 2017, testimony before the Senate Intelligence Committee. Sources said that Comey’s opening statement and subsequent testimony were coordinated with Mueller.
At the hearing, Comey revealed that he had intentionally leaked material from a memo allegedly documenting a meeting with President Trump in order to help assure the appointment of a special counsel.

“I asked a friend of mine to share the content of the memo with a reporter. Didn’t do it myself, for a variety of reasons. But I asked him to, because I thought that might prompt the appointment of a special counsel.”
The DOJ and FBI have stated that Comey’s leaks were unauthorized and compared the disclosures to Wikileaks. The documents we obtained are the first to reveal that high-ranking FBI officials helped Comey coordinate his testimony with Mueller.

We extracted the documents in a Freedom of Information Act (FOIA) lawsuit against the DOJ on January 31, 2018 (Judicial Watch v. U.S. Department of Justice (No. 1:18-cv-00220)). The lawsuit was filed after the DOJ failed to respond to an August 14, 2017 FOIA request seeking:

On May 18 at 6:30 p.m., Comey wrote to Rybicki to confirm that he had accepted the invitation to testify before the Senate Select Committee on Intelligence (SSCI) but declined the invitations from the Senate Judiciary Committee and House Oversight and Government Affairs Committee.

Comey also writes: “Last, would you please tell OGC [Office of the General Counsel] that I would like to be able to review any documents authored by me or on which I am copied that will be produced to SSCI in connection with my testimony and would like the opportunity for that review before I testify?”

An email from a redacted sender, apparently Comey, to Rybicki dated May 19 at 11:49 am reads:

I just got off a call with Senators Burr and Warner. They would like to have a hearing next Wednesday at which I testify, first in open session and then in closed, if necessary. I asked them not to announce it until I check with FBI/DOJ to see if you want to discuss anything before they do that. I told them I had asked for guidance on any institutional prerogatives and for the opportunity to review any documents FBI has produced that relate to me. I told them I would communicate with them by the end of the day to either ask them to hold announcing the Wednesday hearing or go ahead.

On May 19 at 2:10 pm, Rybicki writes back:
Director: We just met to discuss the requests outlined in the two emails below. Before responding the General Counsel has asked me to confirm that you have discussed with the attorneys representing you, and that you are comfortable discussing these issues with us rather than communicating through your counsel.
On May 19 at 3:02 pm, a redacted sender, likely Comey, responds to Rybicki: “Yes and yes.”

Please see a DRAFT response to Director Comey (below). I will hold pending further direction….

In response to your emails below we have consulted with executive management here, including the General Counsel, and recommend the following:

These documents show that James Comey, who was fired by the president, nevertheless had easy, friendly access to the FBI as he prepped his infamous anti-Trump testimony to the Senate.

This collusion led to Comey’s attacking President Trump and misusing FBI records as part of a vendetta against the president.

Judicial Watch Scores New Victory for 76-Year-Old Veteran
Impeach? … For What? … Title and Section of USC!