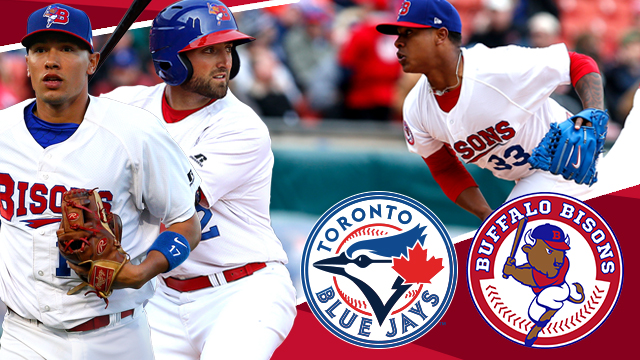 Kids at the gate are eagerly snapping up the cool giveaway of the day.. a replica Buffalo Bisons jersey designed in powder blue Blue Jays colors and designed to replicate the logo and style of the big league club. On the field, Sundays have been designated days for the team to wear those same powder blue unis.

Meanwhile, retired mascot runner Celery is greeting and entertaining fans in the concourse. Canadian beers and Poutine just some of the many concession items on the menu. The game begins, but not before a stirring rendition of “Oh, Canada” to accompany the performance of the Star Spangled Banner.

At the ticket office and at the food stands, vendors are happily accepting those multi colored, plastic Canadian dollars at par, offering fans an immediate 22% discount on their purchases, which are listed in US dollar prices.

Amidst that backdrop, the Buffalo Bisons and Toronto Blue Jays roll out their big announcement… they are extending their affiliation agreement for another two years, to run to 2020.. This makes eight years (and perhaps counting) for this marriage of two cities and shared baseball destinies.

Ben Cherington, Blue Jays Vice President of Baseball Operations delivered this explanation when he visited Buffalo last week. “We’ve announced an extension for our relationship with Buffalo through 2020 and we’re very excited about that. This is an important relationship for us. Our mission with the Blue Jays is to bring the World Series back to Canada and we know that the only way that’s going to happen is by continuing to develop young players and bring them through the system to create a core, and that’s starting to happen.”

Cherington was very clear that the geographic proximity to Toronto was very important. “We need to continue that, and Buffalo is a very important part of that mission for us and it’s obviously the finishing level for that and so the combination of the triple-A level being critical to that mission, proximity to Toronto obviously, and then most importantly, the people here led by Mr. and Mrs. Rich [the owner/president, and president of Rich Entertainment group, respectively] and Jon Dandes [president off Rich Baseball Operations] and Mike Buczkowski [VP of Rich Baseball Ops and Bisons GM] and the entire Buffalo family. There is no other place we’d want to be for triple-A, so we’re happy about this and excited to be here for longer, and we hope we’re here for a long time and we hope we can share with Buffalo in our success moving forward.”

Since returning to AAA in 1985, the Bisons have had five different major league parents. The Chicago White Sox from 1985-1986, then the Pittsburgh Pirates from 1989-1994. The Bisons paired up with the Cleveland Indians from 1995-2008, and enjoyed some of their best onfield success in the modern era, continually posting playoff squads and winning three league titles. Their four years with the New York Mets were a total mess, while hooking up with the Toronto Blue Jays has proven to be a market juggernaut.

The Bisons have enjoyed a resurgence in attendance in the Blue Jays era, with over 2,7 million fans through the gate over the years of this affiliation. Select Bisons games are aired on Sportsnet 590, the Blue Jays radio home in Toronto which is listened to widely throughout Ontario. Former Bisons voice Ben Wagner received his “call up” to Toronto this year to become their new play by play announcer, and his exposure on air through this affiliation agreement no doubt boosted his profile.

At Blue Jays games at Rogers Centre, Buffalo Bisons scores are scrolled on the out of town scoreboard along with the Major League ones.

Despite all the feel good vibe between the two organizations and the marketing synergies that bring the ball clubs together, the one piece missing from the Buffalo Bisons standpoint is winning baseball.

The Bisons last made a playoff appearance way back in 2005. That makes the postseason drought 12 years and running. Fans who follow the teams fortunes have had to endure consistent division pennants by North Division rival Scranton/Wilkes Barre. Even more galling, since the Indians divorced the Buffalo Bisons to set up shop in Columbus, the Clippers have won championships and have had consistent onfield success.

Toronto has not been known for organizational success at the minor league level. In fact, the Bisons played the Blue Jays farmhands in the playoffs when that team was based in Syracuse, and you have to go all the way back to 1998.

Former Blue Jays General Manager Alex Anthopoulos promised changes. When Mark Shapiro came on board as team president, he was almost accosted by Bisons Vice President and General Manager Mike Buczkowski, with Buczkowski reminding Shapiro of the run of excellence in Buffalo when Shapiro ran the Indians.

Cherington made no lofty promises, but spoke about the prospects in the pipeline, none more lofiter than Vladimir Guerrero Jr., who is hoped to be in the Bisons lineup sooner than later. Additionally, major leaguers who have seen time in Buffalo this season include Teoscar Hernandez and Dalton Pompey.

“Just get better every day”, said Cherington. “Our responsibility to that is helping our players and our staff by creating the best environment possible, by finding the best coaching resources, the best development resources, finding the best health and training resources, etc., so that our players have the best possible chance to improve their skills, develop as people, as players, so that ultimately they’re in a position to lead our team in Toronto. And if we’re doing that, then the Bisons are going to benefit from that along the way. So that’s what our focus is, and I think we know how much this team means, and this city means, to Bob and Mindy [Rich], to John, to Mike, and so we have a shared passion there about how much we care about, not just baseball but this place and we want to be a part of that with them, just as we want them to be a part of our mission in Toronto.”

Can the Bisons turn it around? For several seasons, the team started hot out of the gate, with the month of June being toxic and pushing the team out of contention by the All Star break. Here’s hoping that 2018 can be a more competitive season for the team, which has been hugging the .500 mark after losing quite a few games in April due to the weather.