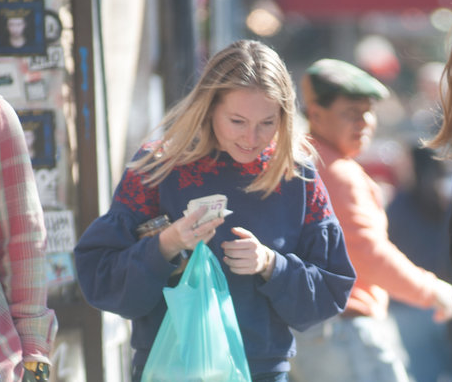 Mack was released to home detention on $5 million bond, on April 24, after spending four days in jail. Raniere has been held in federal custody since his arrest on March 26, being deemed too dangerous to release on bail plus a serious flight risk.

In the same February 14th complaint against Raniere, in addition to naming CC-1 – who proved to be Mack, there was another unnamed co-conspirator. She was identified only as Co-Conspirator #2 [CC-2}.

The answer is India Oxenberg, daughter of actress Catherine Oxenberg, who has been trying desperately to get her daughter out of the cult.

India denies she is in a sex cult, as numerous articles have reported including this one in Oxygen by crime reporter J.B. Nicolas.

The lead Assistant US Attorney for this case, Moira Penza, told the judge on May 4 at a status conference that she expected more arrests would be coming within the next 30-45 days.  Will India be one of them?

The key identifying language in the criminal complaint that reveals India is CC-2 is the mention of CC-2 working with Raniere in a company called The Delegates.

“Co-Conspirator 2 (“CC-2″) had been involved in Nxivm for several years before being introduced to DOS. In or about 2016, RANIERE co-founded ‘The Delegates’ with CC-2, which is a business that provides a network of people who can perform tasks for people in the Nxivm community in exchange for a fee. Based on information obtained over the course of the investigation, CC-2 is CC-1 ‘s [Allison Mack’s] direct slave.”

Everyone in NXIVM knows, India ran Delegates. The idea was first promulgated by cult member James Del Negro. Raniere took credit for devising it and ordered India to operate it.

The “Delegates” were in fact gofers. The company was basically a gofer service where NXIVM slaves, illegal immigrants, and teen girls would run errands, clean homes, chauffeur, cook, and provide other services for NXIVM members who came to Albany to learn the secret teachings of Raniere, whose followers call Vanguard.

There were many trust fund babies lured to the cult by Raniere and his minions, and Raniere may have seen this as a way to extract money from them and possibly to cull from among the more attractive, young and slender female gofers various sexual services for himself.

I don’t claim India was involved in sex trafficking through Delegates, but, according to numerous sources, India worked for a time with a group of teen girls from Chihuahua Mexico, who were part of Delegates.

Jens Gould – who is editor of Raniere’s Knife Media – should remember these Mexican teens for he took them out on an excursion to see various sights in Albany as part of their so-called “educational experience” here.

Maybe nothing illegal happened with the teens, but it was clear to me and others that Raniere intended to teach these girls the “secrets” of his sex practices, and it is known that they left amid rumors of them being unhappy and cruelly used, if not sexually abused.

Which brings us back to India. She ran Delegates.

Here are screenshots leaked to me that show India organized and ran Delegates. I have more that include the names of some of the victims [Jane Does]

Here is a narrative the prosecution used in the criminal complaint that ties India into the conspiracy to commit sex trafficking:

“Jane Doe 2 is an actress and model who began taking Nxivm classes in or about 2016, during which time she became friendly with CC-2 [India]. When Jane Doe 2 was in Clifton Park for a Nxivm class in or about November 2016, CC-2 invited Jane Doe 2 on a walk. As they walked, CC-2 told Jane Doe 2 that she was part of a secret society that had transformed CC-2 ‘s life and enabled CC-2 to uphold CC-2 ‘s commitments.

“Jane Doe 2 left for Los Angeles for a job and while she was there RANIERE sent her a text message saying, “If you want to start this business with me then come back, the sooner the better.

“Jane Doe 2 returned to Clifton Park. She was soon given new assignments, including being kept on a regimented diet of 800-1000 calories per day. After several months, Jane Doe 2 received a text message from CC-1 stating that CC-1 wanted to speak to Jane Doe 2 about a “special assignment.”

“Not suspecting that RANIERE was involved with DOS until this call, Jane Doe 2 asked CC-1 on the call if RANIERE knew about DOS. CC-1 said that he did not.

“After the call, in an effort to avoid having sex with RANIERE, Jane Doe 2 made arrangements to leave DOS. Jane Doe 2 retrieved a car that she had loaned to CC-1 and her cat and possessions from Clifton Park. Before defecting, Jane Doe 2 also captured images of collateral belonging to other DOS members, including CC-2, from an online Drop box account, believing that she could protect the release of her own collateral by having other DOS members’ collateral as leverage. Jane Doe 2 officially left DOS in or about May 2016.”

Is Torture Immoral or Not? What Say You, Ms. Haspel?
Seagram’s heiress Clare Bronfman may be above US law in Buffalo or Albany, but not NYC, not the EDNY DOJ