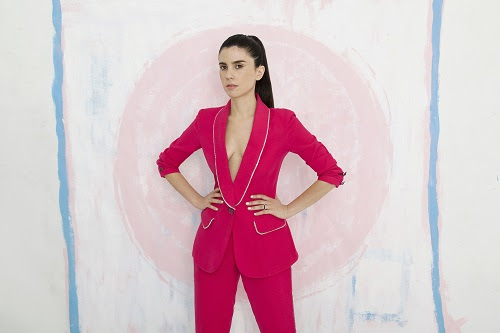 The Latin GRAMMY®-nominated Chilean singer, songwriter and keyboardist Javiera Mena released Espejo (Mirror) in May 2018, her first album under Sony Music. This critically acclaimed LP has produced the hit singles “Dentro de Ti” (Inside of You), “Intuición” feat. Li Saumet of Bomba Estéreo, the title track, and the latest cut “Alma”.
Javiera Mena has recently performed tracks from her new album in Spain, the UK, France, Germany, Brazil and her native Chile. On April 13 and 20, 2019, she will appear at the prestigious Coachella Valley Music and Arts Festival in Indio, California, where she will present songs from Espejo and her previous albums. This festival’s lineup includes such greats as J Balvin, ROSALÍA, Tame Impala, Aphex Twin and Weezer.
Mena expressed her pride in being recognized by this iconic festival: “I’m very happy that the lineup has been revealed, so I can share this news and celebrate with my fans. Coachella is a lovely festival that features artists I hope to watch such as Aphex Twin, Perfume and many others. This represents my arrival in the U.S. market, which we have been working on for quite some time, building on the success of previous visits, such as my sold-out show in Los Angeles. I have English-speaking and Spanish-speaking fans, so we are very excited to perform and continue reaping success.”
Espejo was included on Rolling Stone’s list of the 10 best Spanish-language albums of 2018. It also appeared on critics’ best-of lists in Vice and the Spanish publication Jenesaispop.
“Closer listens reveal an album with a grandeur and scale that her earlier, more Hi-NRG albums could never reach — and which can’t be explained away by a larger budget. Side A carries all the hits, such as the strutting ‘Dentro de Ti’ and the synth-tropical banger ‘Intuición.’ But Side B is where Espejo cuts its teeth: ‘Aire’ is a sweeping soundscape, ‘Escalera’ is four minutes of ascension via electric drums, while ‘Noche’ is a classic Mena track — ferocity dressed in neon Puma Suedes.” – Rolling Stone.
In the near future, Javiera Mena is scheduled to perform in Buenos Aires (Argentina); Valparaiso (Chile); and Santiago (Chile) at the Cumbre del Rock festival and the Blondie nightclub.