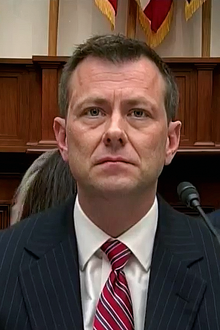 A petulant child or employee will perform a task halfway and wait to see if he can get away with it. Such seems to be the strategy of the entire Deep State bureaucracy.

A case in point: U.S. District Court Judge Christopher R. Cooper for the District of Columbia has agreed with that the FBI did not adequately search for records related to the removal and reassignment of Peter Strzok from special counsel Robert Mueller’s investigative team. He was a former deputy to the assistant director for counterintelligence at the FBI.

In granting our request, Judge Cooper ordered the FBI to further search their records.  (The original, deficient search had only returned 14 pages.)

The order comes in the December 2017 Freedom of Information Act (FOIA) lawsuit we filed after the DOJ failed to respond to and August 17, 2017, request (Judicial Watch, Inc. v. Federal Bureau of Investigation (No. 1:17-cv-02682)). Judicial Watch seeks:

On July 31, 2018, we released the first 14 pages of FBI documents produced in this FOIA lawsuit, showing that Strzok insisted on retaining his FBI security clearance before moving to the Mueller team and confirmed that Strzok played a pivotal role in the flawed Hillary Clinton email investigation.

Notwithstanding that Judicial Watch’s request referred to Mueller by name … the Bureau searched only for the term “special counsel.” But surely one would expect that Agent Strzok and other FBI personnel might use the Special Counsel’s name — “Mueller” — rather than his title when discussing Strzok’s assignment to the Russia investigation, especially in informal emails. Another logical variation on “special counsel” is its commonly used acronym “SCO,” which appears to be used within the Special Counsel’s Office itself, as reflected by documents that the FBI uncovered and produced to Judicial Watch.

The ruling also stated that the FBI did not adequately respond to our FOIA lawsuit because it limited its search to only Strzok’s email account.

Judge Cooper ordered that the FBI must conduct a new search that includes “the email accounts of any of Agent Strzok’s superiors or other Bureau officials who were involved in the decision to assign him to the Special Counsel’s Office or the decision to reassign him to the FBI’s Human Resources Division after his removal from the Mueller investigation.”

The FBI must also expand its search to other forms of communication in addition to email. Given Strzok’s well-known use of text messaging, “it strikes the Court as reasonably likely that he discussed his assignment to the Special Counsel’s Office in text messages—which again is the standard for assessing an agency’s selection of search locations.”

Strzok was reportedly removed from the Mueller investigative team in August 2017 and reassigned to a human resources position after it was discovered that he and then-FBI lawyer Lisa Page exchanged text messages during the Clinton investigation and 2016 election season that raised serious questions about his anti-Trump/pro-Clinton bias. They were also engaged in an extramarital affair. Strzok infamously texted “there’s no way he gets elected — but I’m afraid we can’t take that risk.”

Strzok reportedly oversaw the FBI’s interviews of former National Security Adviser, General Michael Flynn; changed former FBI Director James Comey’s language about Hillary Clinton’s actions regarding her illicit email server from “grossly negligent” to “extremely careless;” played a lead role in the FBI’s interview of Clinton and is suspected of being responsible for using the unverified dossier to obtain a FISA warrant in order to spy on President Trump’s campaign.

The Court rightly slammed the FBI for its gamesmanship in searching for records about one of the most notorious FBI agents of all time – Peter Strzok. The FBI leadership is in cover-up mode on its abuses targeting President Trump, and we’re pleased a federal court pushed back on this stonewall.