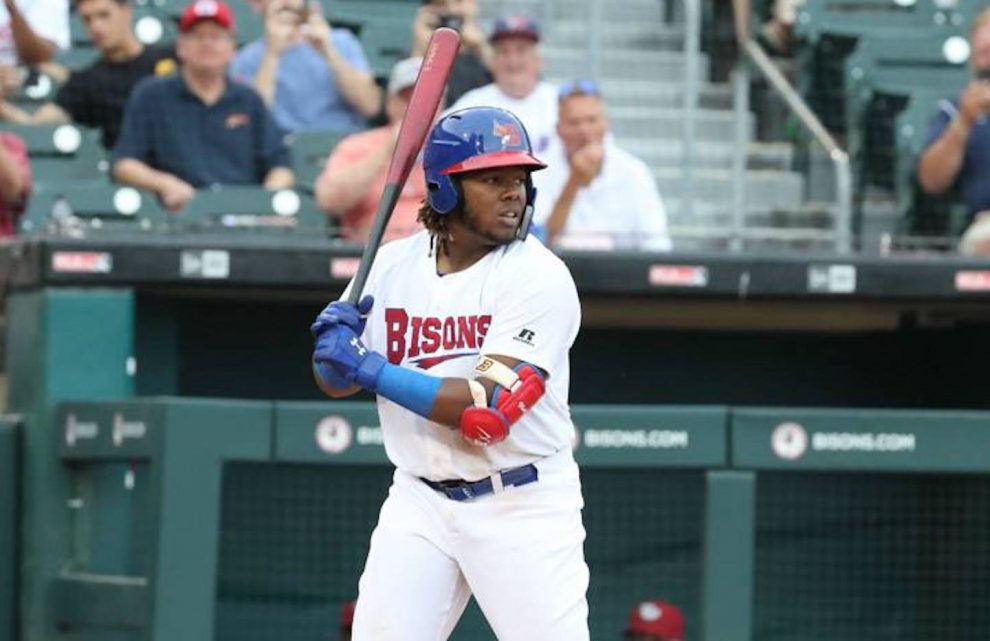 Even the most casual of baseball fans can instantly relate to these Hall of Fame names, amongst the biggest in all of the sport. So just imagine having these players all on your team. At AAA, no less.

For the Buffalo Bisons, it has been a convergence of all three players, the next generation of players from some of baseball’s biggest families.

Vladimir Guerrero Jr joined the Buffalo Bisons on April 11, after spending time in Dunedin, Florida at extended spring training while tending to a nagging injury. For the second time in less than a year, his arrival created a major buzz here in Buffalo, one of the Toronto Blue Jays’ generational prospects and much-anticipated call ups to the big team.

Now we’re into May, and only one of these “big” names remains on the current active roster. Guerrero received his long-anticipated call up to Toronto last Friday, and made his debut to great fanfare last Friday against the Oakland Athletics, collecting his first major league hit, a double, in the bottom of the 9th inning. That became the eventual winning run in the game.

For Bichette, bad news. He suffered a broken hand when hit by a pitch on April 22 and was placed on the injured reserved list two days later.

As for the rest of the Bisons, a pretty dismal month as they finish with a record of 9-14, last in the International League’s competitive North Division.

More telling, the team is dead last in the league in team pitching, with a combined earned run average of 5.97. To put this in perspective, the league’s best is the Syracuse Mets with a record of 3.77. No surprise that they are at the top of the league standings.

Much of this falls on 35-year-old pitching coach Doug Mathis, who just joined the Blue Jays organization this season after two years in a similar capacity at single A.

But the buck still stops with manager Bobby Meacham, now in his third season managing the Buffalo Bisons after two seasons at AA New Hampshire.

That same New Hampshire team won the Eastern League championship in 2018, leading many to speculate that better days were ahead for the Bisons this season, with the expectation that many of their blue-chip prospects were ready for the jump to AAA.

“It’s not the same team we had at double A last year”, explained Meacham, going through a rundown of what has and hasn’t worked for the team so far this year.

Meacham is pleased so far with the balanced hitting attack that dots his lineup throughout the entire batting order. “Lots of weapons is a good choice of words. Guys have been backing up each other and if the top of the order isn’t doing it the bottom of the order picks it up. We haven’t been out of any games because of that.”.

“The pitching is getting better,” said Meacham. “We are expecting improvement.” Meacham was brimming with confidence following a homestand where the team played exceptionally well against the Pawtucket Red Sox, losing only one game during those five games. “We’re just concentrating on getting better and we have been. To their credit, they have gotten better and bounced back.”

The team also had the services of Vladimir Guerrero, Jr., albeit for a short two-week stint before being promoted to Toronto. “It was exciting for the players when they saw him go up. When he was here we were swinging the bats well, and he was swinging the bats well. We helped him out too, but it was great having some excitement when he was here. Now hopefully the players here can watch Vladdy and hopefully join him up there soon.”

Meacham has no focus on specific opponents, insisting that there is no specific strategy being implemented against a team like Scranton/Wilkes-Barre, where the Bisons seem to struggle year in and year out. “We just go out there to compete and to win day in and day out.”

The team is now 13 seasons and running without making it to the Governors Cup playoffs, the longest drought in the International League. With big promises being made in 2013 when the Toronto Blue Jays signed on with the Buffalo Bisons, fans here are still waiting for the turnaround. Hoping that the wins start piling up along with the warmer weather.

The WCC Race, where mascots Chicken Wing, Atomic Wing, Bleu Cheese, and now Carrot and Beef on Weck, race along the foul track for bragging rights and supremacy, is now entering a new chapter of zaniness.

Many remember Celery’s final race before she retired in 2017, winning on her 449th and final race. Enter Beef on Weck, the new evil character, who cheated to many a win by throwing horseradish into the faces of the competitors.

Turns out that Beef on Weck has been a mysterious last minute scratch many a time this April, with just one win so far in 2019 and looking very lethargic on Opening Day.

The writers of this script in the Bisons front office have done a great job keeping this franchise and story fresh and interesting. And now there’s even a children’s book chronicling Celery’s story. More on that in a future column!