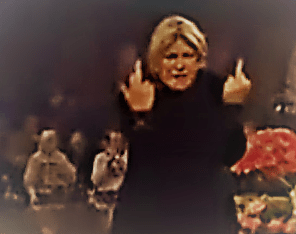 A former member of the Ramtha School of Enlightenment [RSE], who uses the moniker, “Sumbuddy,” has contributed a little more to our discussion on JZ Knight, the leader of the RSE.

As readers know, Knight says she is often possessed by the ghost of someone named Ramtha, who lived on earth 35,000 years ago.

Ramtha, it seems, loves wine and oftentimes Knight, when purportedly possessed by Ramtha, drinks a significant quantity of it.

Certainly, if Knight were to drive an automobile right after one of her Ramtha wine ceremonies, and was stopped by police, presupposing she couldn’t successfully explain that it was Ramtha, not her, that had consumed the wine, she would be arrested and thrown in the drunk tank. And probably lose her license.

While some people [and perhaps ghosts too] who drink too much wine dance on a table, or put a lampshade on their head, when Knight [as Ramtha] gets stinko, her ghost makes predictions.

According to Sumbuddy, Knight, claiming to be Ramtha, predicted, in 2011 that the stock market would crash and the price of gold would go up. Unhappily for her followers who may have invested based on Ramtha’s advice, the exact opposite occurred.

This is another fine example of human credulity.

If you want an inside look on what the Ramtha School of Enlightenment [RSE] students believe, check out this conversation from the Ramtha group on Facebook:

A guy posts on the Ramtha Facebook group trying to understand how Ramtha could be so wrong:

“In 2011, Ramtha said the stock market would crash. … It only has gone up. I love the school and the teachings, I just wished it would stop trying to predict the future when so many predictions have failed. Why couldn’t Ramtha see that Amazon stock would go up and instead if seeing gold, which it went down. I don’t get it.”

“In the timeline that you are referring to; the dominoes were all in place for an intended and unavoidable [stock market] crash. This is the new timeline where Ramtha called Trump and reiterated what most of us know – President Trump is a businessman and this country needs a businessman. The stock market continues to rebound. Major companies are returning to America. We [Ramtha and followers] have ushered in THIS timeline to change the course of history and many things/events on the previous timeline will not happen. Have you listened to Capstone 2016? Have you listened to recent Events? I would recommend that you get caught up to date.”

”It is confusing and frustrating reading predictions in older [Ramtha] books. It would be amazing if the school would round up old different timeline predictions and note that the timeline has changed. It can be terribly distressing and confusing.”

“You should know by now that when the Ram [Ramtha] brings attention to an issue; many of us change the timeline and alter the manifestation. We are on a brand new, vastly different timeline right now. Some things will still occur and others will not happen. All things potentially.”

“Ram’s words run through our neural net … What we interpret is often quite different than what he said. This has never been more obvious in this current moment in time.”

“Really? YOU don’t get it? TRY THIS: The stock market has been predicted to go up really high by experts in the investment field… Before it crashes and that’s how it’s manipulated, so don’t put your limited perspective and judgement on whether a prediction is true or false if it just hasn’t happened yet.(or it might just for U).

But there’s more to SEE here: Most predictions DID [come true] AND SO WHY NOT BE HAPPY THIS ONE HASN’T … AND IF IT DOESN’T – RATHER THAN WISH IT TO BE SO –.WHY SEE THAT AS A FAILURE TO PREDICT INSTEAD OF A SUCCESS AT CHANGING that reality potential (which is what predictions are useful FOR (AS POTENTIALS we CAN change (some). But don’t rely on it won’t ever happen just cuz [it] didn’t [happen] Yet>.  That’s downright dumb. Be prepared and happy if [the stock market] doesn’t [crash]… and find options for all possibilities rather than be blaming what futures are seen and told. That the gift and purpose of seeing the future. Can u dig it? For what it is instead of feeling disappointed?”

Maybe while I was in the arena [where the followers gather and often drink wine – matching Knight, as Ramtha, drink for drink] with those people were just living in different timelines.

I forgot about that. Anytime there’s a mismatch of information its explained way by “oh that was a different timeline”

I forgot that every seat in the arena is its own individual timeline! I forgot to change my timeline to match what my partners were experiencing. Nobody told me the coordinates.

Reading all this now is clearly nonsense. I can’t believe I ever entertained the idea of timelines!

More importantly, DO NOT QUESTION THE FAILED PROPHECIES. They all happened on different timelines and by doing the school’s disciplines everyone changed the timeline, so they didn’t happen for us. [The stock market did not crash because the Ramtha School prevented it.]

That reminds me of when the Ramtha School told us to do fieldwork and we all had to focus on the year 2013 to ensure the planet would survive the 2012 changes.

We all were so happy when 2013 came to pass and we were all still here. [The world did not end.]

We celebrated because we had changed the timeline through focus!!

That’s what we were told.

Can you hear my eyes rolling to the back of my head? When I read it coming from other people it all sounds so crazy. Really you should join the Facebook group to see it in action. It’s funny sometimes.

Anyone who has been in the presence of JZ Knight “teaching” [as Ramtha] has experienced this blunder of confusion and people trying so hard to explain it to puff themselves up.  It’s total nonsense.

I have to laugh that you posted that first video [of Ramtha on Merv Griffin in 1985] as an example of the nonsense she speaks., When I saw it yesterday I was thinking what in the world? Why would they even publish that clip!!

After Knight tells people to turn off the cameras, she goes on venomous tirades of hate and then to make sure recordings are sanitized, she tells the master of music to edit the pieces. Those poor foolish people all over the world who defend her have NO IDEA WHO SHE IS!!

Students are not allowed to transcribe CDs for quotes because Mike Wright [Knight’s spokesman] says their publishing department works hard to make sure Ramtha’s words are not misrepresented.

What he really means is “we gotta scrub the garbage from the drunken rampages for public consumption” because, trust me, even though there may not be a wine ceremony going on every time, JZ is still drunk!

Get close enough to look in her eyes.  They’re all glossed over and unfocused. She can’t even look at people and she slurs her words most of the time.

She is an alcoholic! But students interpret her behavior as part of Ramtha’s quirks.

Why Isn’t Nicki Clyne Standing up for Allison Mack?
Why Weren’t Some Potential Witnesses Called By The Prosecution?
Comment