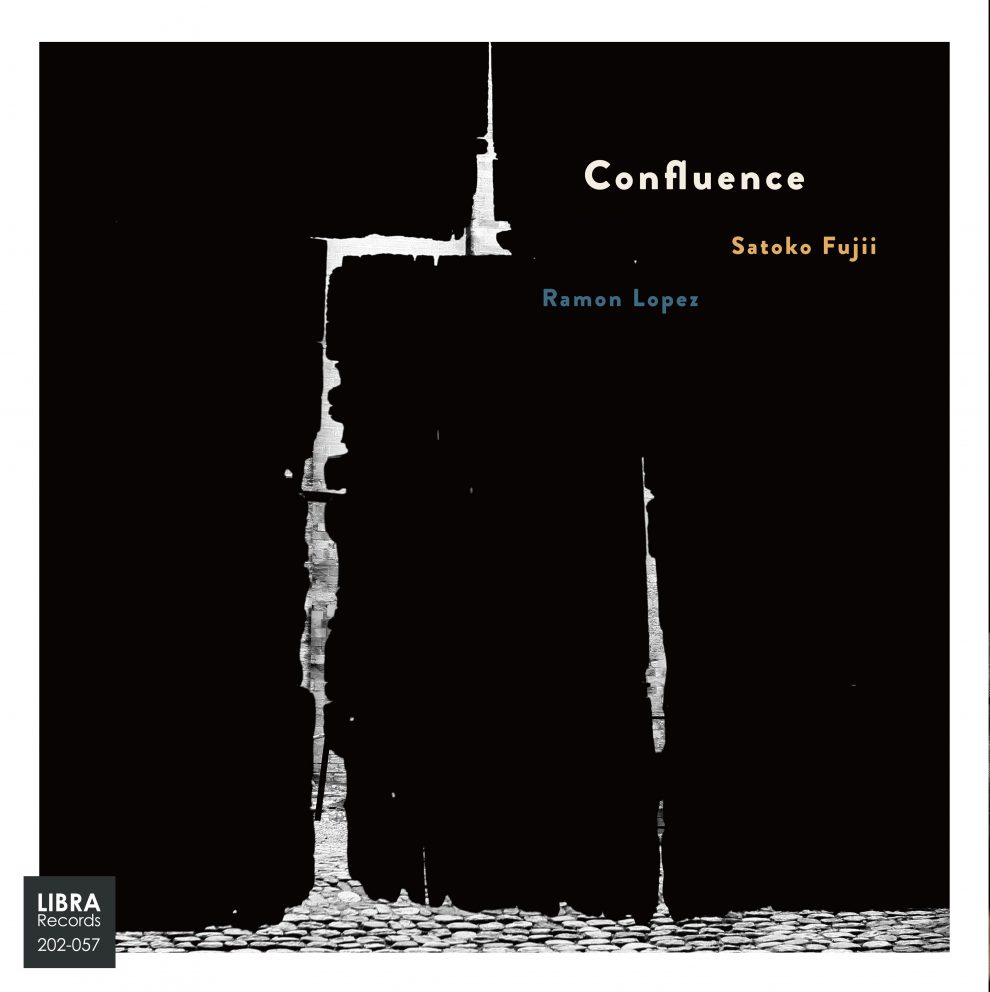 Confluence – the new duo album from pianist-composer Satoko Fujii and Spanish drummer Ramon Lopez – is out this Friday, July 26 via Libra Records.  The recording captures a spontaneous session in a New York studio, with no advance planning.

4 stars: “Satoko Fujii’s duo recordings are among her most interesting projects…. Confluence…is one of the most melodic entries in the Fujii body of work, and it’s highly recommended.” – Karl Ackermann, All About Jazz

“This disc is superbly recorded, the balance between both musicians is perfect, the sound lush, warm, most enchanting. It often sounds as if there is one person playing since every sound is so carefully crafted, sublimely nuanced…. At times, the duo erupt intensely together yet remain connected as the currents rise and fall. If you want to hear the way a great duo works, this is an excellent example.” – Bruce Lee Gallanter, Downtown Music Gallery.

There are times—and they are very rare—when musicians just click instantly. Confluence (available July 26 via Libra Records) captures just such a moment between pianist-composer Satoko Fujii and Spanish drummer Ramon Lopez. Although Lopez and Fujii had known each other for several years, they had only played together once before in a trio. When the opportunity arose for them to record as a duo in New York, they knew they had to seize the chance to make an album. With no advance planning, they simply began to play in the studio and something very special happened.

“This recording was a kind of a miracle for me,” Fujii says. “We didn’t talk about anything before we played. Ramon is a person with a big and deep heart. When we started recording, something came down to me that I didn’t expect. I felt that the room was filled with music and love. It was such a beautiful moment that I ended up playing in a very quiet and peaceful way.”

Indeed, Confluence features some of the most delicate and nuanced playing in each of the participant’s careers. Fujii opens “Asatsuyu,” one of two of her own originals included on the disc, with a solo that emphasizes the graceful freedom and subtly of her line. Lopez enters discretely on brushes, a nonintrusive and supportive presence. The hushed calm of the moment provides ample opportunity to fully appreciate his unique orchestration of the drum kit and the conversational flow of his rhythms.

Their easy rapport continues on “Road Salt.” Fujii begins by plucking sounds on the inside of the piano and Lopez matches the metallic ping of the piano wires with gentle swirl of brushes on cymbals. When Fujii proposes a melody from the keyboard, Lopez taps his approval and they start off in a new direction. It’s a quietly joyful performance that climaxes in an ecstatic burst of rhythmic energy and is so perfectly structured it’s hard to believe it’s all improvised.

In fact, attention to structure and detail are hallmarks of the entire album. “Three Days Later,” another Fujii original, showcases the growing refinement of Fujii’s improvising. She speaks volumes with a mere two chords or a distilled turn of phrase. She’s never been more poetic. Lopez finds the perfect sound or gesture to support or embellish the evanescent beauty of her playing. “Tick Down” evolves from soft-focus prepared piano through unsettled melodic pathways to blissful vamps, absorbing different techniques and ideas into a unified whole. A high-pitched, eerily beautiful drone from the piano strings frames “Quiet Shadow,” providing a rich backdrop for the subtle sound manipulations of Lopez.

“Run!” begins and ends with fast, sharply articulated phrases and crashing chords from the piano and a skein of drum rhythms that help define the ebb and surge of the music. Each improvisation on the album feels complete and distinct.

Spanish drummer, percussionist, and composer Ramon Lopez is a master of many styles. Besides his deep involvement in free jazz and improvisation, he studied tabla with Krishna Govinda K.C., and performed with some of the world’s leading flamenco artists. His first recording under his name, 11 Drum Songs (Leo Lab), an album of solo percussion, was released in 1997. From 1997 to 2000 he was drummer in the renowned French Orchestre National de Jazz under Didier Levallet. His musical endeavors have always been challenging, from his interpretation of songs from the Spanish Civil War to his duos dedicated to Roland Kirk (2002). The French government named him Chevalier of the Order of Arts and Letters in 2008. Recently he’s had a fruitful association with English bassist Barry Guy, recording a duet with him, and appearing as a regular member of his Blue Shroud orchestra. In addition, he has recorded or performed with Joachim Kuhn, Angelica Sanchez, Agusti Fernandez, Joe Morris, and many others.

Critics and fans alike hail pianist and composer Satoko Fujii as one of the most original voices in jazz today. She’s “a virtuoso piano improviser, an original composer and a bandleader who gets the best collaborators to deliver,” says John Fordham in The Guardian. In concert and on more than 80 albums as a leader or co-leader, she synthesizes jazz, contemporary classical, avant-rock, and folk musics into an innovative style instantly recognizable as hers alone. A prolific band leader and recording artist, she celebrated her 60th birthday in 2018 by releasing one album a month from bands old and new, from solo to large ensemble. Franz A. Matzner in All About Jazz likened the twelve albums to “an ecosystem of independently thriving organisms linked by the shared soil of Fujii’s artistic heritage and shaped by the forces of her creativity.”

Over the years, Fujii has led some of the most consistently creative ensembles in modern improvised music, including her trio with bassist Mark Dresser and drummer Jim Black and an electrifying avant-rock quartet featuring drummer Tatsuya Yoshida of The Ruins. Her ongoing duet project with husband Natsuki Tamura released their sixth recording, Kisaragi, in 2017. “The duo’s commitment to producing new sounds based on fresh ideas is second only to their musicianship,” says Karl Ackermann in All About Jazz. Aspiration, a CD by an ad hoc quartet featuring Wadada Leo Smith, Tamura, and Ikue Mori, was released in 2017 to wide acclaim. “Four musicians who regularly aspire for greater heights with each venture reach the summit together on Aspiration,” writes S. Victor Aaron in Something Else. As the leader of no less than five orchestras in the U.S., Germany, and Japan (two of which, Berlin and Tokyo, released new CDs in 2018), Fujii has also established herself as one of the world’s leading composers for large jazz ensembles, leading Cadence magazine to call her, “the Ellington of free jazz.”