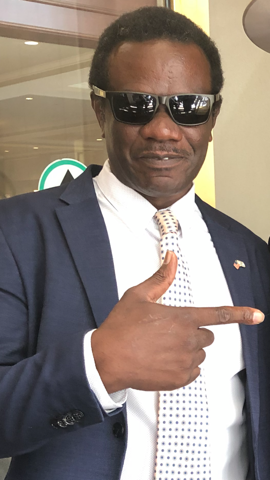 Something definitely can be done about it.

After witnessing the destruction of the state that he loves so much, Derrick Gibson card carrying conservative and black man decided that enough is enough and that he can and will do something about it.

“I simply can’t stand by and let the great state of New York go by the wayside by these criminals in office” Gibson states.

When asked about the ‘criminals in office’ he replied, “The NYS legislature. Namely, Cuomo and his counterpart in the City – Bill DeBlasio.  Both of them are criminal elements and they can not be allowed to destroy our fair state under the guise of help anymore.  Since they have been in office, taxes have gone up, people are leaving NYS in record numbers, the city which was very safe and clean under Guiliani is now crime ridden and dirty.”

When Derrick says he is going to do something about it, he means it.  He has just put his hat in the ring to run against Cuomo for the Governor of NYS.

He just might make it.  He is driven.  He is persistent and knows what he is talking about.

Born in Jamaica, Queens NYC, Gibson was raised by a Christian mother who taught all seven of her children the difference between right and wrong.

Born in NYC, but raised in Georgia, Gibson became well versed in everything that had to do with survival.  He learned how to fish, hunt, grow a garden and be a gentleman.

In high school he became interested in the industrial arts and auto mechanics.  He was quite good at it. So good, in fact that he landed a full scholarship to South Georgia Technology College in Americus Georgia where he graduated with a degree in automotive technology.  After graduation, he was employed in the automotive industry where he gained valuable knowledge and experience which he used to open his own auto transmission shops.

Being young and inexperienced in life in general, instead of using his success to further his business, he blew his money on silly things such as cars, and recreational vehicles.

Undeterred, he realized that he was a bit foolish, but also learned the value of the dollar and because of his foolishness early on, he learned to be even more successful.

He went to college and got his degree in criminal justice.  He has seen both sides of the justice system and agrees that it can be unfair, but he is determined to do something about it.

Growing up a black man in the south with a Christian upbringing and 6 siblings, his mother ran a tight ship. She brought her children up right.  This was the only way she knew.  He had a very spiritual childhood and attended church regularly.  His mom encouraged a strong adherence the concept of right and wrong and taught her children the meaning of the word ‘integrity’.

Life hasn’t always been easy for Derrick, but somehow, he always manages to see the bright side of everything.  And…he perseveres.  He never gives up.  Today, he too is a proud father who has brought his children up the same way that he was raised: the right way.

He thinks that morals and values have a place in the world.  He does not believe that the decline of society is ok.  Quite the contrary, he believes in the upholding the Constitution of the United States.  And with that, he will tell you that he thinks that Political Correctness has been the start of the decline of America.

At the tender age of 18, Gibson became interested in politics.  He paid very close attention to what was going on politically and how these things were affecting his lifestyle.  He saw many things that did not align with his Christian upbringing and he decided then and there, that someday, when the time was right, he would run for office.

That time is now.

After serving on Bush Advisory Board in the small business sector, he decided to move back­ to NYC as an adult and what he is seeing in the state of New York is appalling to him.

“NY has left the interest of its citizens behind in favor of vested interests and back room deals,” says Gibson, “it has got to change.”

He has been seeing politicians running rampant with power, going against constituents wishes, being bought off by vested interests and stripping the rights away from the people of NY.  Taxes have gotten out of control and that is the first thing he wants to change.

Gibson is running for Governor.  He is bound and determined to do it.  He wants to see an end to the criminality of the ‘politics as usual’ in Albany. He has a slogan “Axe the Tax”, and he promises to do just that when he is Governor.

We wish you all the best Mr. Gibson.