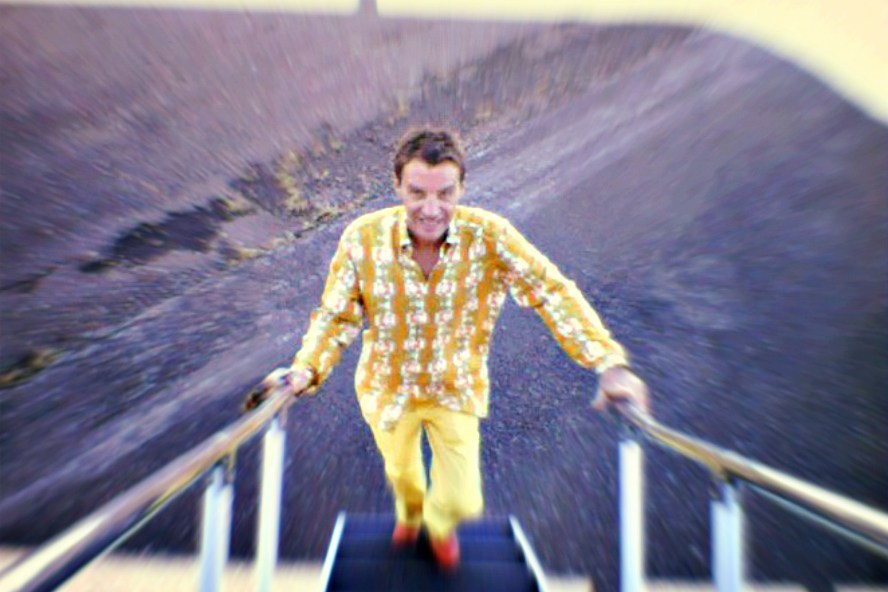 A series of photos of Jean-Luc Brunel ‘playing with’ (harassing?) alleged sex-trafficker Ghislaine Maxwell on the “Pedophile Island” was published by UK’s The Sun (and NY Post). The troubling pictures brought back to the headlines the role of a man once described by a fellow agency owner as a “public danger“.

Brunel, Epstein’s associate accused of rape and sex trafficking on both sides of the Atlantic, is reportedly “fed up” with the allegations.

By now, Brunel, who founded model agencies in France and in the US, has been repeatedly accused of rape, sexual assault and sexual harassment by several former models over the span of decades.

Brunel was also allegedly a vital part of Jeffrey Epstein’s sex trafficking ring, having reportedly provided over a thousand of his “daughters” to the “king of pedophiles”.

The 74-year-old agent and talent scout is NOT in hiding, according to his lawyer.

“Mr. Brunel is actually in France, and is at the disposal of the Justice,” says Ms. Corinne Dreyfus-Schmidt.

Brunel “is psychologically frail,” adds Ms. Dreyfus-Schmidt. “He is fed up, a torrent of horrors has poured out on him.”

It’s been a year since a preliminary investigation was opened in France. Brunel’s attorney is baffled as to why her client has yet to be summoned to testify in this investigation.

She is certain that French Justice is wasting its time.

“In France, it does not advance, leading us to think that they have nothing to go on.”

The certainty of impunity emboldens his legal team to a ridiculous level.

“Most of the charges against [Brunel] have prescribed [in France]. Do these girls think they are in the United States to get the ‘jackpot’ since the compensation amounts there are so substantial? ”

“They piled, piled, and piled the accusations in the press, while we wait for him to be summoned. But we still haven’t been.”

“It’s, therefore, urgent to say publicly that he is not ‘on the run’,” adds Ms. Dreyfus-Schmidt.

At the end of July 2019, the Paris prosecutor’s office assured the AFP that it would continue its “verifications” and “discussions” with the American authorities before deciding whether or not to open an investigation.

Testimonial evidence against him is pretty strong.

In testimony from 2011, in the United States, Virginia Giuffre accused Epstein of having abused very young French girls who had been sent by Brunel to him as a “surprise birthday present”.

“Jeffrey was boasting that they were 12-years-old, brought from France because they were very poor, and their parents needed money“.

The clear implication of these [as yet unproven] allegations is that he would be an international sex trafficker. Besides being an alleged rapist, that is.

A message was found in phone-pads retrieved from the garbage of Epstein by the Palm Beach police.

This is not hearsay. This is judicial evidence, gathered with an impeccable chain of custody by Detective Joseph Contreras’ team from Palm Beach PD.

Credible allegations against Brunel are nothing new: in 1988, a documentary by CBS Network featured an ex-model, on condition of anonymity, accusing Jean-Luc Brunel of having drugged and raped her.

The whole Modeling World was aware of his crimes, confirmed journalist Craig Pyes: “Jean-Luc’s reputation was well known in the fashion industry.”

“Many models told that Jean-Luc offered to ‘give’ them to his friends – to go out to dinners, and to sleep with them. The girls who resisted got no more work because they had not slept with Jean-Luc or with his friends.”

Former model Courtney Soerensen accuses Jean-Luc Brunel to have sexually assaulted her in 1988.

“He tried to push me into his bed. I resisted, he persisted. He tried violently to rip my shirt. I managed to escape from the bedroom.”

After the assault, castings and photo-shoots became rare for Courtney. She believes herself to be the victim of retaliation from Brunel.

She describes the world of modeling as “a meat market”.

After the CBS documentary aired in 1988, the prestigious Ford agency stopped working with Jean-Luc Brunel.

In 1995, Brunel’s troubles continued to press on. Author and journalist Michael Gross wrote a well-documented book entitled “Top model, the secrets of a dirty business”.

Gross remembers the words by late Jérôme Bonnouvrier, the respected boss of a French agency: “He is a public danger. He knows exactly how to handle fragile girls, and what they’re looking for.”

Another acquaintance explains: Brunel and “a well-known gang” invited the girls and put “drugs in their drinks”.

In 2009, the French agent was subpoenaed to be heard under oath in the US, after the filing of the first complaint against Epstein, in Florida.

He never appeared in court. He “played hide-and-seek, ensuring, through his lawyer, that he was abroad and unavailable”.

In 2015, when at odds with his former mentor, Brunel confessed: “Epstein asked me to leave the region, and to go to Europe and Asia to delay the testimony.”

Also in 2015, Brunel announced legal actions in France and the United States to expose the “false allegations,” but none of his suits have prospered.

The next day, Jeffrey Epstein was arrested disembarking his plane in New York, arriving from Paris.

The Epstein arrest and subsequent death in prison resurfaced accusations launched against the French agent by former models, including Dutch Thysia Huisman, who claims to have been “drugged and raped” by Mr. Brunel in the 1990s.

Thysia Huisman, talking to “Europe 1” about her abuse by the Frenchman whom she accuses of rape, said he is a man with “two faces”.

“My modeling agency in Belgium sent me to work for Jean-Luc Brunel, and told me to stay with him, in his apartment. Of course, I found that weird – but my agent had encouraged me, she said he could help me a lot with my career.”

“He had two faces,” she continues. “He could be very professional, very kind, do things professionally – and, at night, he would become a completely different person.”

Brunel kept telling her: “One evening, we’re going to sleep together”

“When I got there the first day, I asked where I was going to sleep and he said ‘in my bed!’ I said no, and he didn’t answer any further, I stayed up for hours before I ended up sleeping in another model’s bedroom, on the floor.”

And then, at this juncture, Brunel raped her.

“He gave me a drink, some kind of cocktail, and after I drank it I felt really weird, the sounds were different. He said ‘come and rest in my bed’.”

“I remember it was blurry,” continues Huisman. “He pushed me on his bed and he ripped my clothes off. The next day, I woke up naked in his bed, with bruises on my legs and an unfamiliar kimono over my shoulders.”

“When I realized what had happened, I felt so bad, ashamed, and dirty. What I regret most is not having filed a complaint. My agent in Brussels laughed at me, and she told me that it was not professional for me to have left Paris.”

“It was terrible to see how many women, after me, were provided to Epstein. I was very angry. Everyone knew, like my agency in Brussels. They all turned a blind eye.”

“Now we are trying to motivate other victims to speak up, maybe more recent victims, so that the police are forced to act on it.” Huisman hopes.

The noose also began to tighten for Brunel in America, where sex trafficking and pedophilia do NOT always fall under a statute of limitations.

“I had sex with him many times, between the ages of 16 and 19.” said Virginia Giuffre. “He didn’t care about the conversation, he just cared about the sex”.

“Brunel brought young girls (ages 12-24) to the United States, for sex. Epstein told me he slept with over a thousand of Brunel’s ‘daughters‘. All I have seen seems to confirm it.”

On the Paris prosecutor’s investigation on the Epstein affair, the majority of the reports that the investigators received actually concern Jean-Luc Brunel.

“On the judicial front, we have nothing to charge him with because the crimes [are time-barred],” said a French police source.

But the investigation continues, even with Epstein dead.

Last July, a complaint for acts of “sexual harassment” was filed against Jean-Luc Brunel. Ten women claim to have been raped, sexually assaulted, or sexually harassed by the now-74-year-old man.

Of these ten testimonies, the most recent one is the key, as it concerns relatively recent facts crimes that have not yet broken the statute of limitations.

“A young French woman in her twenties has filed a complaint in recent weeks for sexual harassment against Jean-Luc Brunel. The facts described are less than four years old and are, therefore, not prescribed, as the prosecution confirmed to the French press.

A 46-year-old Dutch woman claims to have been drugged and raped by Jean-Luc Brunel in a Parisian apartment, in 1991, when she was 18.

The New Zealand model Zoe Brock also came forth with claims of being sexually assaulted by Brunel, and also professionally punished for having managed to escape.

An unidentified Canadian also testified to the police.

Four other alleged victims were heard later by investigators, a judicial source told the press. They all have reported prescribed crimes, so they could not file a complaint.

I would like to finish where I started, with the newly released pics from the Island featuring Brunel and Maxwell.

While it’s impossible for me to know for sure, when I look at this photo below, in my opinion, is hard to reconcile with the narrative that Ghislaine and Jean-Luc would be “partying”. He holds her head way down – and the dog is sniffing her, sensing something wrong.

That’s abuse in my book. No two ways about it.