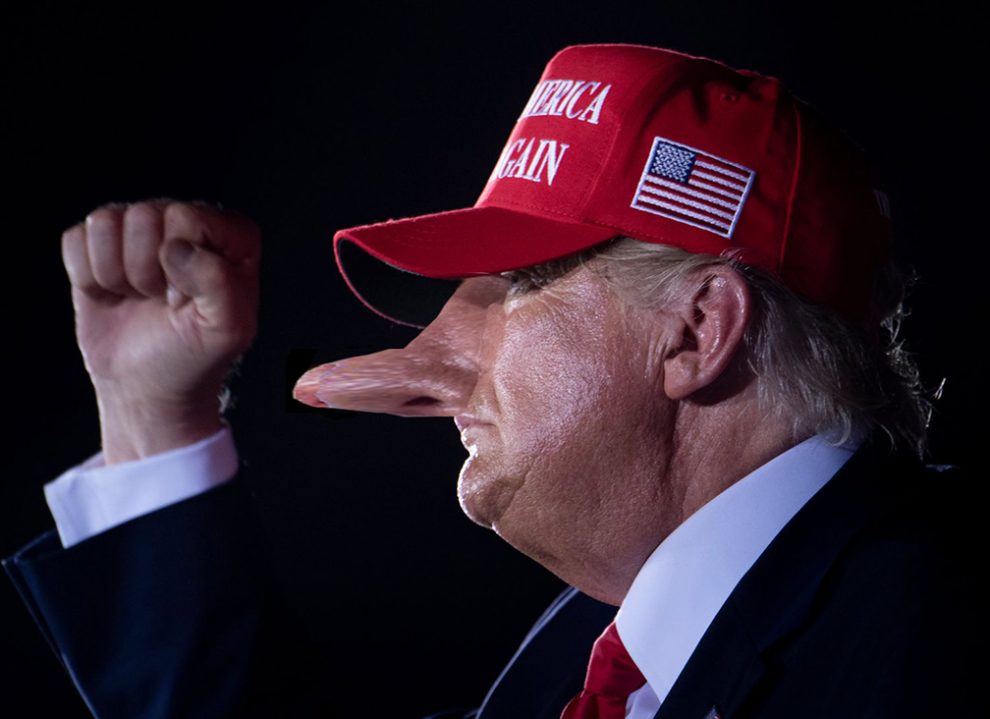 Much has been made recently of the concept of the “big lie”:  repeating a falsehood so many times that it becomes plausible to many. Cognitive psychologists refer to this phenomenon as the “illusory truth effect,” and President Joe Biden weighed in on the phenomenon himself when condemning senators who supported Donald Trump’s assertion that he (Trump) won the 2020 election by a landslide.  Biden declared, “You keep repeating the lie . . . the degree to which it becomes corrosive is in direct proportion to the number of people who say it.”

Repeating a lie can certainly be a powerful technique in the public sphere, particularly when the utterance is made by people in power, but it’s hardly the only method of deception. Sometimes it’s necessary to undertake what’s called a “close reading” (or “close listening”) of misleading speech in order to recognize other potent techniques. A speaker can mislead by omission or innuendo. Or he can frame, or contextualize, a speech in such a way that it mis-leads (leads in the wrong direction) by virtue of the effects it brings about.

On January 6, Representative Jim Jordan of Ohio rose in Congress to object to the certification of the Electoral College vote that affirmed Joe Biden’s election, and he called for an investigation. Jordan began by declaring, “the American people instinctively know there was something wrong with this election.”

Jordan explained by telling how Donald Trump drew much greater crowds to his rallies than Biden, that he had won Ohio, Iowa, and Florida – and that he had garnered 11 million more votes in 2020 than he did in 2016.   Jordan then declared, his voice rising in a questioning tone, “somehow the guy who never left his house wins the election?”

Jordan went on to say that 80 million people have doubts about the election, and that 60 million believe it was stolen. Yet, he said, the Democrats have seen no problem in all this and have rebuffed requests for an investigation. The reason for their intransigence, according to Jordan, was clear:  “all the Democrats care about is making sure Donald Trump is not president.” For evidence, Jordan cited investigations that resulted in no actions against Trump: an FBI investigation into Russian interference in the 2016 election as well as the Mueller investigation. Jordan cited, too, the Democrats’ failed attempt convict Trump in last year’s impeachment trial.

Consequently, according to Jordan, the Democrats “changed the rules” in an “unconstitutional fashion” in the effort to oust Trump in the 2020 election. They obtained a court order, for example, to extend voter registration in Arizona by 18 days, and they supported a Pennsylvania Supreme Court ruling allowing mail-in ballots in Pennsylvania to be counted three days after the election. Such measures, he said, were constitutionally within the purview of state legislatures, not the courts, and this dangerous end-run now has the possibility of being extended to other states in the future.

If you watch the YouTube video of this speech, you’ll see Mr. Jordan speaking rapidly and passionately, packing much content into his allotted five minutes. In the heat of a moment like this, you don’t have the opportunity to consider language dispassionately, as you would with a written document.

But if you take the time to replay the speech, you’ll see the earmarks of deceptive communication. The speech misleads because of what it omits, what it implies, and what it generates by way of pernicious effects. Take the issue of omission, for example. A good high school or college speech teacher instructs her students to address the most salient counter-arguments to their positions when making speeches on controversial subjects – a basic rhetorical move Congressman Jordan chose not to make.

He wondered why the guy “who never left his house” somehow won the election, yet he failed to mention that this “guy” garnered 81,283,098 votes to Mr. Trump’s 74,222,958, or that this same guy received 306 Electoral College votes to Trump’s 232 as a result of elections that were certified by both Democratic and Republican secretaries of state in all 50 states.  Nor did he pay heed to the 61 failed lawsuits filed by Trump and his allies, underscoring the lack of any significant fraud in this election.

Nor did Jordan once mention the raging Covid pandemic that constituted the principal reason for extending deadlines for registration and the counting of mail-in ballots.

Jordan’s speech marks a profound failure on many counts. The congressman never baldly stated that the election was “stolen,” but the implications and the framing were clear: this was an effort to cast doubt on the legitimacy and integrity of a fair presidential election. Consequently, when Jordan spoke of the voters’ “doubts” and the beliefs of many that the election was stolen, he bears responsibility as an elected leader for helping incite those baseless doubts.

Though the January 6 debates on the floor of Congress may be quickly receding from memory in the rapid succession of subsequent news cycles, the issue of ethics in communication will become even more important as a second impeachment looms.

Whatever positions Congressman Jordan or other similarly inclined elected leaders may take in the future on such questions, it’s important to remember that the responsibility lies not just with these leaders.  As consumers of media, we too can assume responsibility.  Even when speech and imagery come at us rapidly, we can find ways to slow things down, reflect critically, and assert our agency as truth-seekers and as citizens.