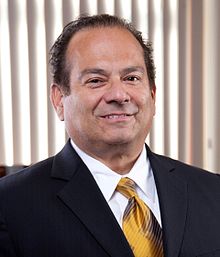 “First, while Mr. Pfaff notified the Court …  that he was represented by me, the Court recently wrote directly to my client …. to inform him that a meeting has been scheduled for October 13th ‘to address your assignment of counsel issue.’  This letter was not addressed to me in any manner and I would have been unaware of it had Mr. Pfaff not brought it to my attention.
“Neither my client nor I had any prior knowledge that you believed there was such issue and we are concerned about what prior communications, if any, have been made to the Court by prosecutors or law enforcement agents about this issue. If there are any records of such communications, I hereby request copies…
“I did contact the Court’s staff on the morning of September 30th to inform the Court that I had been the recipient of a disturbing communication, which I took to be a threat. On September 29, 2015,1 was told repeatedly by FBI Special Agent Brian A. Burns that I could not represent Mr. Pfaff as I was going to be a witness in the case against him and that I ‘better talk to Judge Pietruszka’ about this. This suggests that there have been prior communications with the Court about this issue, without any notice to me or my client.
“Instead of responding to my communication, however, the Court ignored it and sent the letter dated September 30, discussed above.
“Among my concerns is whether there is an effort to artificially disqualify me as Mr. Pfaff’s counsel to deprive him of his choice of preferred counsel and therefore threaten to violate his federal and state constitutional right to counsel in criminal matters.”

“There was some confusion with regard to Mr. Pfaff’s representation. At the request of the NYS Attorney General’s Office, I appointed Mark Worrell to represent Mr. Pfaff under NYS County Law Section 18-B. A letter was sent to Mr. Pfaff to advise him of this appointment.
I then received a letter from Mr. Pfaff that was unclear as to the issue of representation, advising me that he would rather be represented by you, with your fees being charged to Erie County’s Assigned Counsel Program. The October 13, 2015 conference was scheduled to explain to Mr. Pfaff that this Court could not authorize your payment by the county as you were not on the Assigned Counsel’s eligible attorneys list. It was my intention, at that point, to have Mr. Pfaff decide whether he would be represented by Mr. Worrell under the Assigned Counsel Program, or be represented by you as his retained attorney.
“As … your letter … confirm(s) that Mr. Pfaff has, in fact, privately retained your services himself, there is no longer any reason for the October 13th conference, and I am cancelling it.
“Thank you for clearing up this matter.”

“… your (latest) letter fails to address several of the issues …  and raises … additional questions that need to be answered.
“You state that you appointed counsel at the request of the Attorney General’s office, yet their authority to make such a request is unclear as their interests are hostile to Mr. Pfaff’s. Their communication appears to be ex parte so the question arises of which exception to the general ban on such communications applies here?
“You state that counsel was appointed pursuant to County Law 18-B, however, that statute only allows counsel to be appointed to represent someone ‘charged with a crime.” I have no information that Mr. Pfaff has been so charged.
“It is difficult to understand how you feel that Mr. Pfaff’s letter  ‘…was unclear as to the issue of representation,..’    My client clearly indicated that he declined your assignment of Mr. Worrell to represent him and stated, ‘After careful consideration I’ve asked attorney Peter A. Reese to counsel me on this matter.’   What is unclear about this?
“You have failed to explain why the Court completely ignored my communication to the Court’s staff on the morning of September 30th informing the Court that I had been the recipient of a disturbing communication, which I took to be a threat: ‘On September 29, 2015,1 was told repeatedly by FBI Special Agent Brian A. Burns that I could not represent Mr. Pfaff as I was going to be a witness in the case against him and that I ‘better talk to Judge Pietruszka’ about this.’
“The issues that remain unanswered by your letter include:
“1.  My request for copies of all records pertaining to any prior communications between the Court and prosecutors or law enforcement agencies.
“2.  The propriety of law enforcement agents who are not lawyers attempting to coerce 6th Amendment counsel to withdraw from a case by invoking your name, including your implied imprimatur on their tactic.
“3.  Whether Mr. Pfaffs constitutional rights to counsel, state and federal, have been violated….

Reese said that following this letter he never heard further from the court.

Whether any of this is relevant or not in the question of whether Judge Pietruszka, who signed the search warrants and tried to assign counsel for a witness and/or defendant who was not charged, was the prosecution’s choice of judges or if he just happened to be the impartial, neutral and detached judge well suited to do his duty in the Pigeon case who was on hand to serve justice is a matter to be decided by a fellow Judge, Donald Cerio.
Stay tuned.